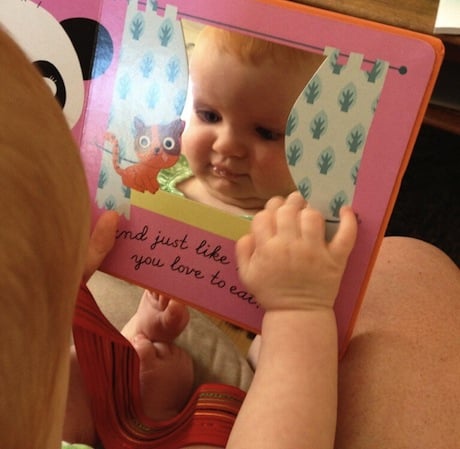 Picture courtesy of @kylewestaway, who named Noodle as her favourite Nosy Crow book.

Friday was our birthday and we invited people to tell us what their favourite Nosy Crow apps and books were on Twitter.

It couldn’t be less scientific, we know, but we were interested to see what titles came up and thought we’d share them with our blog readers.

The Three Little Pigs was named by fiercegreymouse, mardixon and anne_jackson.

Cinderella was named by jodawson72.

Bizzy Bear (or, in the vernacular of her two year-old, Beeya Bear) apps, Bizzy Bear On the Farm and Bizzy Bear Builds a House were named by pixiecake.

Favourite picture and board books:

Goldilocks and Just the One Bear was named by lucycoats and elephanttai.

The Pip and Posy series was named by lucypeatfield and mentioned by cjfreiss and WELbooks too.

Books Always Everywhere (out next month) was named by librarymice.

The Baby That Roared was named by elephantthai

The Grunts in Trouble was named by lindsaylit and by the author of the book (cheating, but impressive on the self-publicity front), philpardagh.

Twelve Minutes to Midnight named by tittamarim and alibrarylady

Our very first book, Small Blue Thing, was named by (13 year-old (I know: I met her at a conference on Saturday) daydreamsworld.

Dear Scarlett was named by voundjian.

Mega Mash-ups and Magical Mix-ups were named by damyantipatel

The Rescue Princesses series was named by jodawson72

We were impressed that, though many of our followers struggled to make a selection between a number of titles, they were able to come up with a favourite title (well,there were those who couldn’t decide, and had to list a top handful of titles). We can’t begin to choose. We love ‘em all – all the ones that our Twitter followers happened to mention, and all the others that weren’t mentioned by followers today. All 9 apps and 69 books published so far.