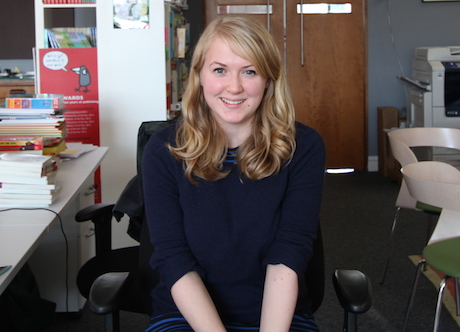 Hello! I’m Ellie and I’m very excited to be joining the Nosy Crow team as Publishing Assistant today! After a bit of a whirlwind interview process two weeks ago (which involved speaking some rather rusty Spanish…) I’ve finally arrived at the Crow’s Nest, and am really excited to start working with all the great books and apps made here. I’m also looking forward to spending time in the lovely Nosy Crow office here in Borough which already seems like it’s going to be a great place to work (two cups of tea and a slice of cake by 11am on my first day is a good sign I think).

I’m coming to the job pretty much straight out of a French degree at the University of Oxford with some experience in the French publishing house Flammarion and also with the great team at the Caroline Sheldon Literary Agency, which is where I first encountered Nosy Crow’s fantastic picture books such as Penny Dale’s Dinosaur Dig! series.

I’m thrilled to be going into such a diverse job where I’ll be assisting Ola, the Rights Manager, and Tom, the Business Development Manager. At the moment I’m most excited to get involved with the latest fairytale app, Snow White and the Seven Dwarves, which will be coming out in early 2015, and also to see the great things that are bound to come from Nosy Crow’s new partnership with the National Trust. I’ll also be updating this blog quite a bit too, so this probably won’t be the last you hear from me!