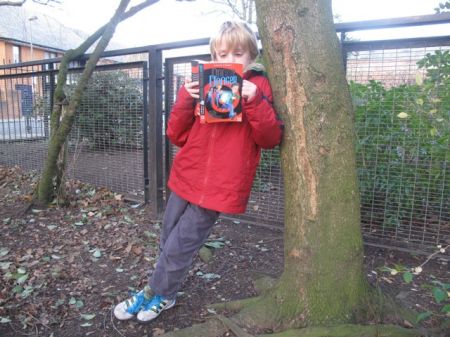 Yesterday was the publication day of Danny Danger and the Space Twister by Adam Frost, the second in the nail-bitingly hilarious adventures of Danny, a boy who can control time thanks to his amazing Cosmic Remote. But the tremendously evil Space Twister (think David Bowie circa Ziggy Stardust) is after the Remote and the story follows his fabulously inventive attempts to get it. But Danny has a new gadget – the Time Tablet – and this gives him the power to delete his arch enemy for ever. But will he do such a dastardly thing?

The photo above is of one engrossed young reader, and here’s his enthusiastic review:

Congratulations, Adam, on writing a book with all the thrills and spills an eight-year-old boy could wish for!

An Editor’s Choice Award for Bizzy Bear on the Farm