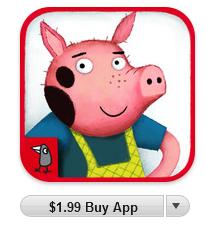 We’ve decided to lower the price of our first app, The Three Little Pigs, over the holiday period, as a way of introducing people to our work. We’re taking the price down to $1.99 US/£1.49 GBP/1.59 Euros from now until the end of the day on 2 January 2012.

One of the challenges of making apps is getting people to find your app, and, once they’ve found it found it, getting people to buy something that (lite versions notwithstanding) they can’t try before they buy. We think that new iPad, iPhone and iPod touch owners may be particularly cautious about buying apps if they haven’t bought them before. We hope that, by lowering the price of our first app, people will be encouraged to find out about Nosy Crow and maybe even try out the other two apps we’ve published this year.

We’ve just released Bizzy Bear On The Farm. FutureBook described it as “unmistakeably Nosy Crow in design and quality … The app will further Nosy Crow’s reputation in this field, which can only bring relief to ‘bizzy’ parents looking for quality and safe content for their children.”

Meanwhile our second app, Cinderella – has won, in the last month, a KAPi award, a Futurebook award, a Digital Storytime 5-Star Award, and been named one of 2011’s 10 Best Apps by the School Library Journal.

And, by the way, The Three Little Pigs was no slouch on the awards and critical acclaim front, and is – because it’s been on the market longest – our bestselling app.

We’re confident – based on the five star reviews that we’ve received from people on the app store apart from anything else – that once you’ve shelled out for a Nosy Crow app, you won’t be disappointed. Lowering the price of The Three Little Pigs for a limited time is a bit of an experiment. The app market is still in its infancy, and developers like us are still working out what the best way of selling our products might be.

So wish us luck!

If you have an iPad, iPhone or iPod touch and have managed to withstand the temptation to buy a Nosy Crow app, we hope that this offer will just nudge you over the edge.

Cinderella on the front page of the “Apps for Kids” store