Axel Scheffler Exhibition in Germany, and a retrospective look at his work - Nosy Crow Skip to content 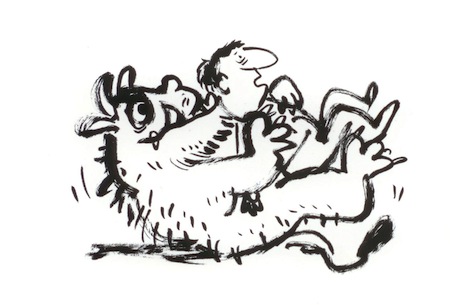 Axel Scheffler Exhibition in Germany, and a retrospective look at his work

Just before last week’s Bologna book fair (a Bologna blog post follows when I am feeling a bit perkier as I have come down with a post-fair lurgy), I went to Troisdorf near Cologne in Germany to a really great exhibition of Axel Scheffler’s artwork, both published art from books and magazines and unpublished art including gifts he’s given as presents, illustrated envelopes (of which Nosy Crow has several and I have many), sketches (and some of his sketchbooks) and pictures he’s done just for fun.

A picture that Axel just drew because he felt like it

This blog post is illustrated by a brush-pen sketch clearly done when Axel was feeling rather haunted by his most famous illustrative creation, the gruffalo.

As someone who has been published a lot of Axel’s work in the UK, I was asked to write a piece for the catalogue.

This is what I wrote:

I am rather proud to say that the quarter-century anniversary of my friendship and professional connection with Axel Scheffler is coming up next year.

I met Axel in at the Bologna Book Fair in 1988. I was selling rights for Faber and Faber and he’d recently completed his first book illustration work, illustrating The Piemakers by Helen Cresswell (now unavailable, but here’s the audio edition with Axel’s cover) and the Bottle Rabbit stories by Bernard McCabe. Looking back at the black and white illustrations for these books, it’s possible to see many of the things that make Axel’s work so immediately recognisable: Bottle Rabbit is very visibly the direct ancestor of Pip, the rabbit character that Axel created twenty-four years later for Nosy Crow’s Pip and Posy series.

That’s not to say that Axel’s work has stood still: there is something more … basic about everything from the line to the characterisation in these Faber books, though, at the same time, the artwork is somehow less accessible, and certainly, I would say, without quite being able to say why, less “British-looking”. And, technically speaking, too, Axel had a journey to take: other than the covers of these books, these are simple black-and-white line illustrations, and Axel is best known, at least in the UK, for his colour ink-wash-and-pencil work in picture book form.

Axel‘s first picture book, You’re a Hero, Daley B, was published in 1989 by Walker Books. Daley is yet another rabbit (and there is a distinct anthropomorphised-animal, if not always rabbitty, theme to Axel’s British book illustration). By the time that You’re a Hero, Daley B was published, I had gone to a company, Reed Children’s Books, that subsequently evolved into Egmont Children’s Books. I was still selling rights. I had a good friend there, Elke Lacey, whose background was in fiction publishing, but who, for some reason that I’ve now forgotten, was sent a text by an unpublished singer/song-writer and performer. The text was a reworking of a traditional story about an old lady who complains that her house is too small and is advised by the local wise man (a rabbi in the Jewish version of the story) to resolve the problem by taking her animals into her house. The situation gets worse and worse… until the wise man tells her to let all the animals out and she rejoices in how (relatively) commodious her house feels. It was a tightly put-together text with immaculate rhyme and scansion. The author was Julia Donaldson. I suggested that she and Axel, who was by then a friend, would make a good pair: I thought that the absurdity of the animals piled into the house (and, perhaps, behaving in increasingly human ways as a consequence) was something that Axel could capture.

Very sadly – she was very young – Elke died before the book, A Squash and a Squeeze came out, but the partnership that has been the key to the success of both parties was formed.
Some time later, I left the company to become publisher at Macmillan Children’s Books. Alison Green joined me there shortly afterwards. Quite soon after we’d started, Julia Donaldson sent a text to Axel. She knew that Axel and I were friends, and thought that it might be a suitable book for Axel to illustrate and for Macmillan to publish. The text was The Gruffalo. Axel remembers me reading it aloud to him over the kitchen table of the flat in which he lived, and my immediate enthusiasm for the text and sense of its potential. Alison and I knew it was something we wanted to publish and something that Axel would illustrate brilliantly. A multi-million copy seller in the UK and translated into more than 40 languages (I have lost count and so has Axel), The Gruffalo has been adapted into an Oscar-nominated film, and you can buy everything from a Gruffalo suitcase to Gruffalo paper napkins. In the run-up to the last election, several of the new-generation “new man” political leaders showed that they were real family men by including The Gruffalo among their favourite books.

An early sketch of the gruffalo and the mouse, before both were made less scary

The famous Sally-Anne test suggests that children under the age of four or five find it difficult to understand that other people (or characters) may not know something that they themselves know. If the simple “Sally-Anne test” baffles such children, then even fewer, surely, would understand the layers of misleading going on in The Gruffalo?

But I have read the book to two year-olds, my own children included, and something about it works even for children who can’t unpick the complexities of the narrative. I think that one of the reasons is Axel’s extraordinarily direct illustrations. We can read the confidence on the face of the mouse as he (or she, but that’s a whole other discussion…!) leads the gruffalo away to meet the other animals. We can see the fear on the face of the snake as it looks at the gruffalo and the first doubt appearing in the gruffalo’s eyes. The book is never really scary for a little child, because the mouse, enacting his or her plan, never looks scared.

I suppose that if I had to say that there was one thing that is the reason for Axel’s success it’s that the characters he draws are extraordinarily expressive. Whether they’re snails or whales, or witches or wise men, or mice or monsters, we immediately know what they are thinking and feeling. Pip, in Pip and Posy: The Little Puddle is a male rabbit. Because he accidentally wees on the floor, he needs to change out of his clothes, but Posy, a female mouse, only offers him dresses. The illustration makes children giggle and adults smile, not just because Axel captures the situation, but because the expression Pip wears as he holds out two alternative dresses perfectly conveys his silent, tight-lipped doubt about both options.

In fact, these Pip and Posy books have very minimal texts and they’re all about feelings. The narrative and the emotion are entirely carried by Axel’s illustration skills. They are, I think, books that would not work in the hands of a lesser illustrator.

I said that the picture of Pip makes children giggle and adults smile, and this element of humour is another source of Axel’s huge success: his illustrations are funny, not just because of the expressions of the characters, but often because of peripheral details away from the main focus – the graffiti on a wall in The Smartest Giant In Town or The Gruffalo’s Child; the squirrel with his paws to his ears as Zog the dragon learns to roar; the scrunched-up face of the crow in the face of the wind that blows strongly enough to blow the hat off the witch in Room on the Broom. The humour is often in small details… and Axel’s work is extraordinarily detailed.

In ways that are hard to pin-point Axel’s art doesn’t quite look British, and this is one of the reasons it stands out in such a recognisable way in British bookshops and libraries. He is, however, working in a line-and-wash (with, in his case, pencil) style that is part of a great British tradition including great illustrators such as Edward Ardizzoni and Quentin Blake. Like Ardizzoni and Blake, Axel’s art has verve, humour, poignancy and, as I’ve said, expressiveness.

Axel’s art also, I think, looks, like Quentin Blake’s, easy, by which I mean it looks effortless. In fact, he can, and does, draw very fast. But he rejects many, many line drawings before they get to the colour stage. His colour work is painstaking and larger double page spreads takes time. The depth of colour is built up with thousands of carefully-judged brush strokes with a layer of pencil on top of that. But when you watch Axel draw and paint, and I have been privileged to see him do so more often than I can count, you are aware, I think, of being in the presence of someone completely in command of his remarkable talents, whether you’re watching the effortless fluidity of the initial lines, or the careful and slow build up of colour. Axel himself doesn’t, I think, always see it like that: I don’t think that Axel is often satisfied with his work – he has, perhaps, a vision of an ideal version of the illustration he’s working on that he can never quite realise.

But however hard he finds it, the creation of Axel’s initial line looks easy to the onlooker. And Axel’s art is “easy” in another way too: it’s easy to understand, easy to respond to. Axel is extraordinarily well-read, and aware of his own and of different illustrative and artistic traditions. Despite this, he does not, I think, illustrate to impress. I see many, many illustrators who are interested in creating artwork that they and other adults find “beautiful”, or “challenging”, or “interesting”. This doesn’t seem to motivate Axel. Instead, his illustration is wholly accessible. There is nothing difficult about it, and that’s where his appeal to children lies.

Axel’s illustrative journey has taken place at a time in which illustrative techniques have changed with extraordinary rapidity: most children’s book illustrators now use digital technology to create, manipulate, enhance or at least correct their images. This is not a tendency that Axel has, so far, embraced at all. He’s resolutely attached not just to inks and pencils but to particular inks and pencils: I’ve had to order some pencils for him from the US quite recently, as he couldn’t find them in the UK, France or Germany, and, though not a complete Luddite, he doesn’t shop online. While digitally-created artwork can have warmth, I think that it’s this very visibly made-by-hand quality – the lines uneven as the nib scratches its way along the page, the water marks visible in a stormy sky – that is another part of the appeal of Axel’s art: while it is utterly modern, it also feels very traditional, warm and personal.

The Gruffalo has been followed in the UK by other books that are also British modern classics: The Snail and the Whale, Room on the Broom, Stickman, The Gruffalo’s Child and many other books, both those created in conjunction with Julia Donaldson and those created with other authors. I’ve been involved in most of them, and, while I am proud of many of the books I have published, they are, I think, the best books I’ve worked on.

We have a new apps partner!