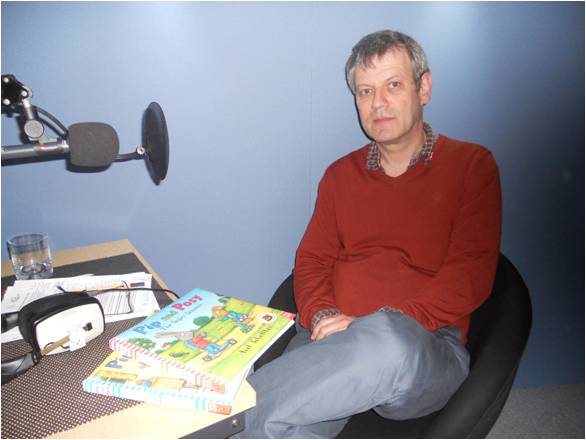 Axel Scheffler talking about Pip and Posy on the radio

Lots of interviewers wanted to talk to him about his best-known books, The Gruffalo, which he illustrated and Julia Donaldson wrote and which I published at Macmillan perhaps almost 12 years ago. The book is regularly described as a modern classic and is the basis of an Oscar-nominated short film, not to mention a merchandising phenomenon, so this isn’t terribly surprising.

The Pip and Posy books are about a boy rabbit called Pip and a girl mouse called Posy. They all explore a bad thing that happens, that makes either Pip and Posy very sad, or angry or scared, and then the books show how they resolve those problems. So in Pip and Posy: The Super Scooter, Posy takes Pip’s scooter without asking and then she falls off it. Even though Pip was furious with Posy, he gives her a hug, and, though Posy’s hurt her knee, she cheers up and they both go and play in the sand pit. Though the stories are short, Axel wanted to communicate in the illustrations how angry Pip is and how sad and sorry Posy is. In Pip and Posy: The Little Puddle, Pip has an accident and does a wee on the floor. He’s really embarrassed, but Posy makes it all OK. He borrows some clothes, and the next time he has to do a wee, he does one in the potty. So every story has an low point – and “oh, dear” moment – and then, at the end, a high point – a “hooray” moment.

Axel’s ability to capture, for example, the expression on the face of a male rabbit asked to choose between two alternative dresses to wear after a puddle-on-the-floor accident is one of the reasons we think he’s utterly brilliant!

The interview, together with interviews on BBC Humberside, BBC Ulster, BBC Bristol, BBC Wiltshire and BBC Cumbria, will be broadcast today, with others following over the next few days.