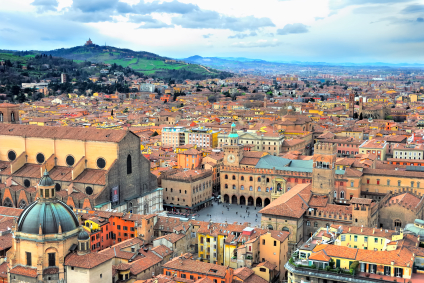 Today we’re off to the Bologna Children’s Book Fair.

This is big bananas for us, and we have been working flat-out to get ready for it.

It is one of two weeks in the year – the other is the Frankfurt Book Fair in October, but Bologna’s the big one – when we meet the non-UK publishers we’ll do business with for the rest of the year. At Bologna, we have just 30 minutes (20 if they have to queue for the loo before the appointment) to impress a foreign publisher with our books. The aim of the game is to sell, or at least interest them in buying, the right to publish our books in translation.

For the last few months, Anne-Marie’s been putting together the schedule of selling appointments for me and for Adrian. We have appointments every half-hour from 9.00am to 5.30pm without breaks for three-and-a-half days.

For the last month, since the launch of The Three Little Pigs app, Ed and Will have been working with Deb on our next app in the 3D Fairy Tale series, Cinderella.

For the last month, too, Imogen’s been collecting together final print and freight prices for books of many different sizes and kinds – board books and pop-up books and picture books, and working out how much we have to sell them for in order to stay in business. This is a hard task: we always want our books to be the best they can be – to have the heaviest paper, the most spectacular pop-ups the most unusual touch-and-feels – and it’s tough to compromise!

For the past few weeks we’ve been receiving artwork from illustrators. Some of it arrived in time for us to proof it, but most of it, because we are still new and building our list and publishing sooner after artwork delivery than is ideal, did not, so we’ve had to make dummies using photocopies of the art stuck into blank books. This is an unbelievably time-consuming, tricky, painstaking and monotonous task, and Steph and Nia, in addition to doing lots of last-minute designing, have been working on this tirelessly with Camilla. Nia finished the very last one at 10.30pm yesterday evening.

And for the past few weeks we’ve also been pulling together words and pictures to add to the books section of our website to announce some of the books we’ll be taking to Bologna, including The Grunts, the acquisition of which we announced to a great response on Wednesday.

For the past day or so, we’ve had a steady stream of meetings with people who are in the UK before they go to the book fair – our Japanese agent, Noriko Hasagawa, for example – who I mentioned in a recent post – and Liz Bray from our Australian distributors, Allen and Unwin. They have gamely picked their way through the chaos of the office, and brushed scraps of paper and fur-fabric (for touch-and-feel books) from chairs before sitting down at a table that is slightly sticky with glue.

For the past day or so, too, I have finally been getting down to working on the slides for the first Tools of Change Conference to happen in Bologna, at which I am – eek! – the first keynote speaker on Sunday.

And yesterday, as if we didn’t have enough to do, we bought (or at least confirmed the deals on) three picture book texts, illustrations for two picture books and a debut novel.

Next week is the most important week of our year.

S.C. Ransom interviewed by Crowthorne Life about her debut novel