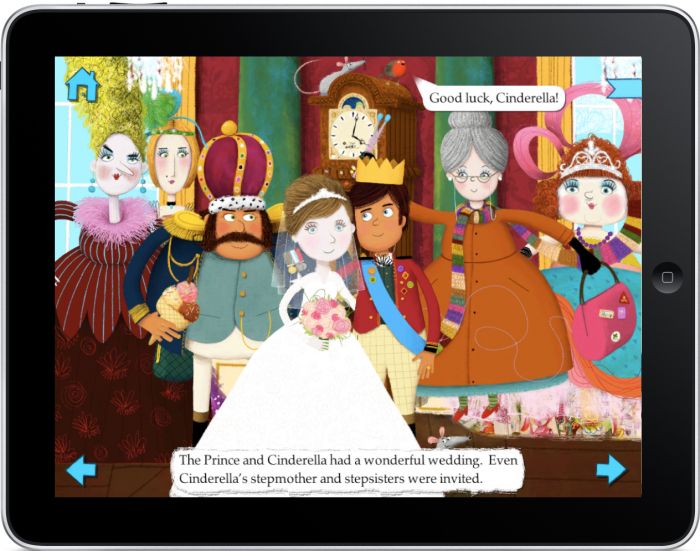 Cinderella: making an app of the most romantic fairy-tale of all – another Valentine’s Day post

In September of last year, we published our app based on the story of Cinderella.

We’d already published one app, and that was The Three Little Pigs. The story of The Three Little Pigs is one of danger and destruction and drama, and we used the interactive features of the iPad to enhance these: the most obvious example is that we enabled the child to help the wolf huff and puff the first two houses down.

Cinderella, though, is a story about different things: hard work, transformation and love. We emphasised the idea of hard work by enabling the child to help Cinderella with her various chores. We used touch screen interactivity to enable the child to make the various transformations happen… and we were left with the question of love.

I have two girls, who were as princess- and fairy-obsessed as the next child, and I found two things about the Cinderella story a challenge: the first is that she’s passive, and the second is that the prince falls in love with her when she’s looking “right”: all dressed up in a ball gown.

In this app, we were keen to stick with the traditional story, so there wasn’t much we could do about the inherent passivity of Cinderella: in our app, as in most versions of the stories, she’s pushed around by her stepsisters and stepmother; she’s transformed by her fairy godmother; and she’s chosen by the prince. We did, though, have Cinderella answer back to her stepsisters and stepmother, and we had her initiate the final trying on of the shoe. At the end, she’s shown in Converse-style trainers playing table tennis against her spouse.

But, as a parent of girls (now older), I also felt a bit squirmy about the idea that Cinderella is chosen just on the basis of how she looks. We played with the idea of appearance by introducing various mirrors in which the reader can see themselves. The vanity of the red-haired sister is contrasted with Cinderella’s various statements about the party and the prince: “I bet the prince doesn’t care what people look like”; “All this silly fuss about clothes!” and “Aren’t parties just about having fun?” for example.

None of the prince’s responses to Cinderella are about how pretty she looks. When she arrives, he says, “She has a very friendly smile”. And when they dance together, he says things like, “You’re a jolly good dancer”; “I don’t feel shy with you”;“You seem terribly kind”. We tried, throughout, to make them feel equal to one another.

I was also aware that we’d chosen to use children’s voices in our narration/dramatisation, and our characters – and this was deliberate – don’t look quite like adults or quite like children. This meant that we didn’t want anything too smoochy or sexualised in our portrayal of the relationship. We felt that this was an app for children much too young to really understand the concept of romantic love or sexual attraction, so we made Cinderella and the prince’s relationship about companionship more than anything else.

I am not saying for a moment that ours is a “feminist” version of Cinderella (though there would be nothing wrong with that). We chose to stick pretty much to a traditional story (and I could write a whole other blog post about the importance of traditional fairy tales), but we did think hard about how we presented romantic love.

Cinderella has won several awards. People, from children and parents to teachers of children with special needs and speech therapists, love it.

You could buy it here if your interest is piqued.

Another stage in the making of an illustrated book (Playbook Farm)