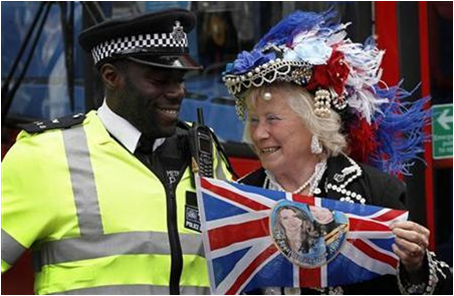 London has really been partying today, and many of you will have seen the coverage of the Royal Wedding.

We are very lucky to live in the middle of London, but it wasn’t really an option to stroll out and bag a great place this morning: so many people had planned for today very carefully and secured their views by turning up before it was light or even camping out for days (I saw the first tents on Wednesday morning).

I have two girls, who were more interested in event than they were readily willing to acknowledge, both being past the pink princess stage. We watched much of the lead-up and the ceremony on TV. They liked the trees and the music (top marks to timpani man), and the dress more than passed muster even with the sartorially-critical child. Then, in the lull before the balcony appearance, my older child said she thought we ought to go out and see what was happening on the ground. We arrived at the south side of Buckingham Palace about ten minutes before the wedding party came out onto the balcony. I can’t say the view was great, but I was able to catch sight of them, and, by lifting up older child (something I don’t do often these days), she was able to see them too, even if they did look like dressed-up ants at that distance. What was amazing was to be out in the sun and part of a crowd of a million people (that’s what the BBC is estimating) all of whom seemed to be in a good mood. There were British people and non-Brits, people in wheelchairs and babies in buggies and slings, couples and families with grandparents and kids, people in sensible jeans and tee-shirts and people in wigs and wedding dresses.

We came home and made chocolate eclairs for people who were dropping by the house on their way out of London – the first time I’d made choux pastry since I was a taught domestic science at school. They are, in fact, ridiculously easy to make, and I say that as someone who can hardly cook at all.

Anyway, what this post is really about is another fairy tale altogether, so, if you’ve had your fill of princesses, it’s the turn of pigs – and, specifically, our Three Little Pigs app, which has had the most fantastic reviews online and in the app store and of which we’re very proud.

Just because we’re feeling generous, we’re giving away ten copies of our Three Little Pigs app for the iPad and ten copies for the iPhone/iPod touch.

Here’s how to enter. Answer one of these questions in the comments field below. We will pick the best answers and award promo codes so the winners can download the app.

1. Who is your favourite character in the story of The Three Little Pigs and why?

2. What’s your favourite memory of reading The Three Little Pigs either as a child, or to your own children (or grandchildren, nephews, nieces, neighbours)

3. Why do you you think your children (or grandchildren, nieces, nephews, neighbours…) will like this app?

Please be sure to tell us whether you’d like an iPad or iPhone version of the app in your response.

UPDATE: THE COMPETITION IS NOW CLOSED.