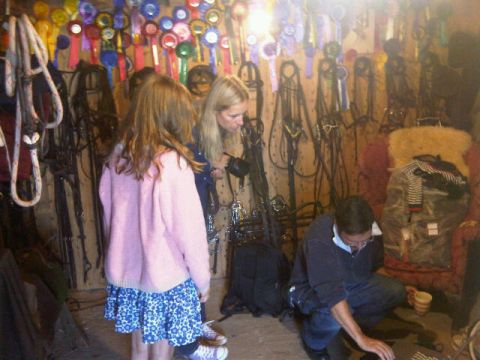 Country photoshoot for a book cover

Today, and not without a qualm, I left the last of the Ikea shelving assembly for the new office (I have a personal best of 15 minutes for a 4 × 2 Expedit). Instead, I was up with the lark to drive to Herefordshire for a photoshoot.

The shoot was for the cover of The Secret Hen House Theatre by Helen Peters who Dom described meeting in his blog post last month.

The book’s out in April of next year, and, frankly, we’re late with the cover: we’ve been using a mocked-up cover for the first couple of highlights presentations we’ve done. But we had to wait for a slot with photographer Marsha Arnold, recommended by Peter Florence of Hay Festivals after I posted a request for recommendations on Twitter. She photographs Monty Don, cheese and sheepshearing among other things, and we thought that she was the woman for us.

Here she is, in what is, I think (though I am no expert on such things), a tack room, which was being used to represent the hen house of the title. She’s checking results on a laptop screen, with our model for Hannah, the book’s heroine (wearing a cardi of Camilla’s), and techno and lighting man, Paul.

This kind of photoshoot is one of those hands-on, “detail” things that I would never have been involved in in any of my previous publishing lives, but, especially for debut fiction like this, creating a really great cover for a book is one of the most important ways you can, as a publisher, contribute to a book’s success. Overall 6% of all (adult and children’s) fiction purchases last year were made on the basis of cover alone, and a further 27% were made on the basis of “browsing” in which is seems likely to me that cover played a part, according to BML’s Books and Consumers survey 2010.

We had a very clear brief, based on an image we’d found of a grown-up model looking out of a barn-ish sort of doorway, and it looked to me as if we got some great images today. We’ll post the result as soon as we can.