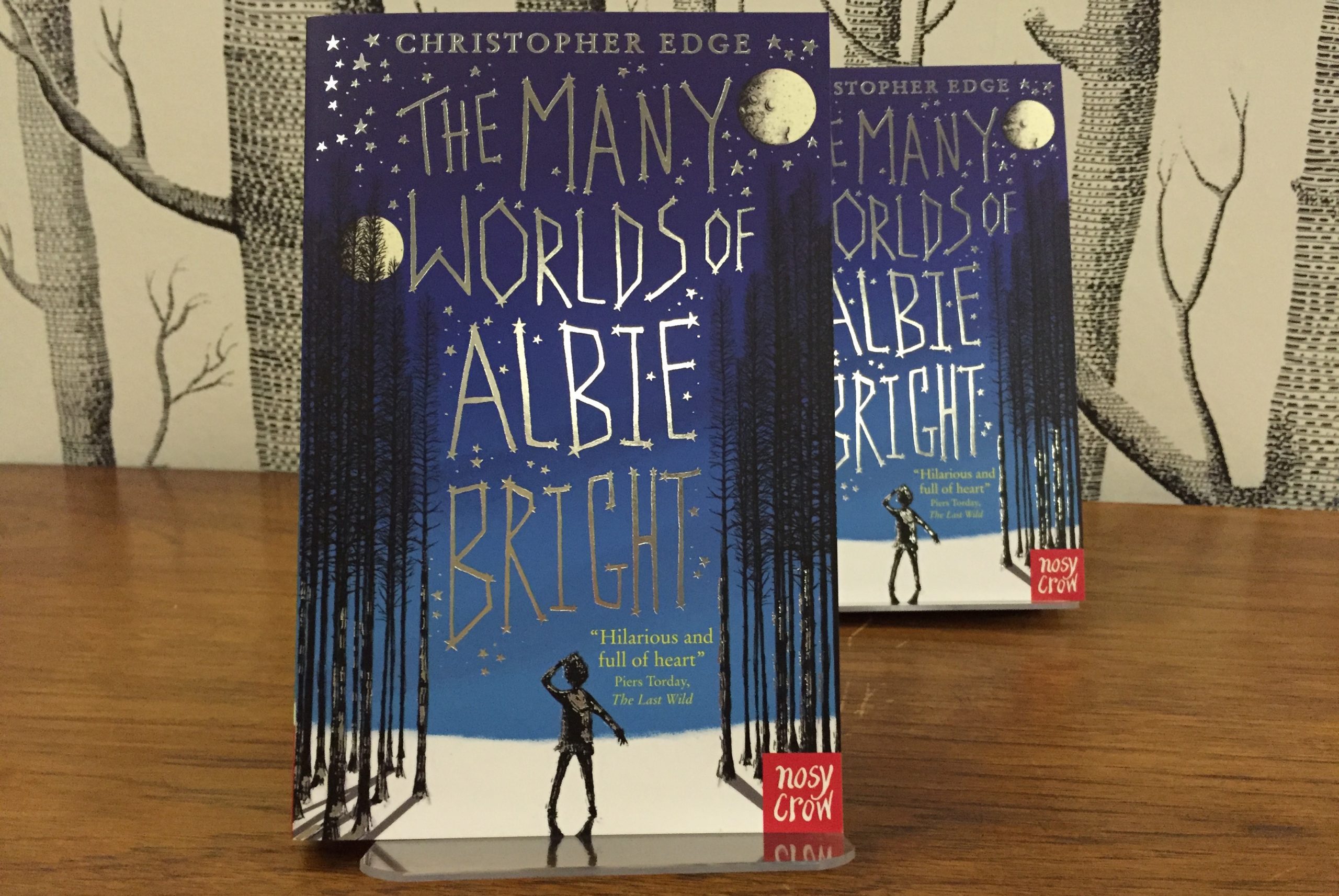 Today’s guest post is by Christopher Edge, author of The Many Worlds of Albie Bright, on creating a soundtrack for the book.

I love music. I can’t listen to music when I’m writing. This is a source of great frustration to me.

But even though The Many Worlds of Albie Bright was written mainly in silence, punctuated only by the occasional sound of me banging my head against the laptop keyboard, there is a soundtrack to the book. These are the songs that in some way inspired me as I was writing or which now take on a new meaning as I think about Albie’s story.

I really envy songwriters and musicians their almost supernatural ability to evoke an emotional response not only with lyrics, but also wordlessly with a melody, a key change or a fading chord. Music connects on a primal level. And the music that soundtracks your life can become freighted with new meaning when something happens that completely changes your world.

The Many Worlds of Albie Bright is a story about a boy trying to come to terms with the death of his mum and tells how he uses quantum physics to journey to parallel worlds in search of her. There’s sadness in its pages, but I hope that readers find hope and wonder there too. I wanted Albie’s story to tap into the emotions that these songs hold for me, to move people and remind readers that, no matter how dark things get, the stars still shine in the sky.

You can listen to the Spotify playlist here and, if you want to read along with the soundtrack, the tracklisting at the bottom of the page indicates the chapter each song belongs to. I won’t tell you about every tune, but here’s some of my favourite songs from the soundtrack and why I chose them.

Do You Realize?? by The Flaming Lips – A beautiful song about the miracle of life and the inevitability of mortality, filled with science and wonder. I couldn’t have started the soundtrack with any other song.

Death With Dignity by Sufjan Stevens – From Carrie and Lowell, an album of songs inspired by the death of Sufjan Stevens’ mother, for me this haunting track evokes the loneliness and loss that the death of a parent can bring. In this article from The Guardian, the journalist Danny Wright writes movingly of the solace this album brought him when his own father died.

Shroedinger’s Cat by The Ghost of a Saber Tooth Tiger – Finding a song about quantum physics isn’t as easy as you might think, but in this track from Sean Lennon and Charlotte Kemp Muhl, the physicist’s metaphorical cat muses on love and mortality.

Intergalactic by The Beastie Boys – Now I don’t want you thinking The Many Worlds of Albie Bright is a total sob-fest. From a stolen stuffed platypus to a kidnapped psychopathic cat, there’s a lot of humour in the pages of the book and this joyous tune from the Beastie Boys literally soundtracks a pivotal scene in the story.

Come Home Baby by The Charlatans – From my album of 2015 comes this beautiful song filled with love and yearning. In my mind I hear the lyrics as an ode to a newborn baby. It’s a song I can imagine Albie’s mum singing to Albie as he lay in his cot and years later it’s a song that could fuel Albie’s search for his mum through parallel worlds, and maybe even bring him home.

P.S. You Rock My World by Eels – One of the key inspirations for The Many Worlds of Albie Bright is the Many Worlds Interpretation of quantum physics which proposes that parallel worlds exist. This theory was created by the US scientist Hugh Everett. His son, Mark Everett, is the lead singer and songwriter of Eels, and made Parallel Worlds, Parallel Lives, a fascinating documentary about his father’s theory and the relationship they had. In this song, the key refrain of ‘Maybe it’s time to live’ echoes the strength that I hope readers find in Albie’s story.

The Prettiest Star by David Bowie – The soundtrack ends with a triptych of songs about the stars, with pride of place taken by this beautiful song from the great David Bowie. And in tribute to an icon whose music brought such inspiration to me and millions of others, here’s a line from The Many Worlds of Albie Bright. Shine on, Ziggy.

The Many Worlds of Albie Bright is out now – you can read the opening chapter of the book below, and buy special signed copies of the book exclusively from the Nosy Crow website here.

Did you enjoy this post? Sign up to the Nosy Crow newsletter below, or at this page, and we’ll keep you up to date with our great new books, author news and events, and competitions and giveaways.

Louise Bolongaro, Head of Picture Books, looks back at her time on the Non-Fiction list