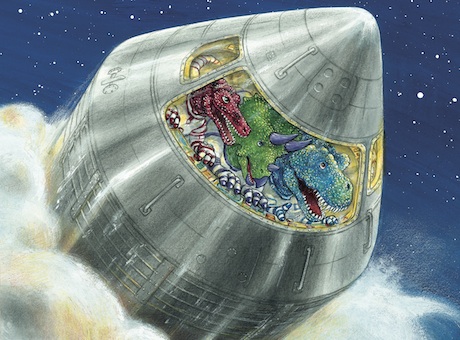 Dinosaur Rocket: “I just died and went to heaven”

Next month we’re publishing a picture book that I’ve been looking forward to for AGES: Dinosaur Rocket by Penny Dale, the fourth book in Penny’s incredible dinosaur sequence. I’ve written about this book (and the previous ones) before, and I love it SO much: it is a sort of picture book platonic ideal for me. Dinosaurs! And Space! It’s so brilliant.

And one person who I knew would also love the book is Ben Johncock. Ben’s an author who has expressed his admiration for Penny’s books in the past, and has also written a space book of his own (for adults), Burning Blue, which will be published by Picador USA in July next year. This was Ben’s reaction when I sent him the cover for Dinosaur Rocket in September:

I JUST DIED AND WENT TO HEAVEN. And there were dinosaurs there. In rockets. RT tombonnick</a>: <a href="http://t.co/nKRgyssdsU">pic.twitter.com/nKRgyssdsU</a></p>&mdash; Benjamin Johncock (benjohncock) September 16, 2014

So when advance copies of the book arrived in the office a couple of weeks ago, there was one with Ben’s name on it. And I was THRILLED to see his reaction on Twitter:

Nothing escaped Ben’s notice – and it’s the small, perfect details that make this book so special:

I love this book so much! LOOK AT HIS LITTLE FACE! NosyCrow</a> (Thank you, thank you <a href="https://twitter.com/tombonnick">tombonnick!) pic.twitter.com/lUK5N45bKG

I think this speaks for itself:

And just look at Penny Dale's gorgeous illustrations – so rich with texture. pic.twitter.com/pmScS7WAXR

And of course, it was very gratifying to see someone take the rocket science so seriously (particularly as Penny is INCREDIBLY diligent in her research for every book):

I note that Penny decided to go with Direct Ascent, rather that Lunar Orbit Rendezvous… NosyCrow</a> <a href="https://twitter.com/tombonnick">tombonnick pic.twitter.com/dJiQZE3ixv

But then, even NASA would struggle to get 3 dinos in the LEM, I guess. NosyCrow</a> <a href="https://twitter.com/tombonnick">tombonnick

But none of that distracts from the sheer joy of reading about dinosaurs going into SPACE:

LOOK AT THESE GUYS! pic.twitter.com/5epK2GJjON

And this was, I think, a very fitting note for Ben to end his Twitter review on:

(With just one more note on astronaut etiquette):

And the book had such a profound effect that Ben carried on tweeting about it the next day:

Dinosaurs + rockets = the perfect marriage of beast and machine.

I think this might be one of my favourite reviews for one of our books, ever. Thank you very much, Ben, and thank you, Penny!

Dinosaur Rocket will be out in January and you can pre-order it online now.