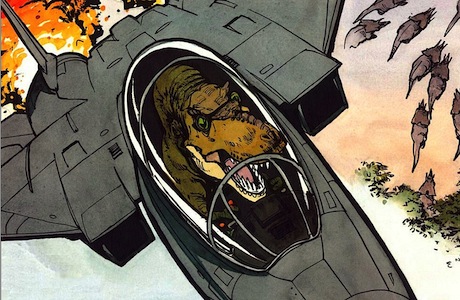 Last week on Twitter, (adult) book blogger John Self wrote that, “Our boys’ favourite book right now is Dinosaur Dig! Basically someone has taken Calvin & Hobbes’ dinosaurs in rocket ships and run with it.”

I thought this observation was absolutely spot on, but I was a little surprised that it had never occurred to me before. I love Penny Dale’s brilliant series of Dinosaur books, and Calvin and Hobbes is my favourite comic strip OF ALL TIME. In fact I’ll go further than that: it’s one of my favourite things of all time. I can’t think of many books (or films, television shows, songs, or anything else, for that matter) that had a greater impact on me as I was growing up, and I suspect it’s part of the reason that I decided that I wanted to work in children’s publishing.

For those of you aren’t familiar with the strip, it tells the story of six-year-old Calvin and his toy stuffed tiger, Hobbes, who is an entirely real, living animal for Calvin alone. The strip ran from 10 years, from 1985 – 1995, and covered a dizzying span of themes over its run – life, death, love, Christmas, babysitters… and dinosaurs.

The dinosaur stories were some of my favourites: like a lot of Calvin and Hobbes, they took place entirely within the imaginations of the two main characters, which was denoted by the dramatically different art style in which creator Bill Watterson drew them. The juxtapositions between the strip’s signature cartoon style and the much more ‘realistically’ drawn dinosaurs, and between Calvin’s unbridled dinosaur enthususiasm and the indifference of everyone else (including Hobbes) around him, produced some hilarious moments – here are some of the best ones (you can click each of the images to enlarge):

I mentioned John’s comment to Penny, and sent her some examples of Watterson’s dinosaurs, and she was very impressed by the practicalities that he’d overcome to fit dinosaurs into today’s world (a challenge she faces with each of her Dinosaur books) – here’s what she said to me in an email:

“These are so amazing! It’s fascinating to see how someone else has squeezed a T rex into a vehicle … and I think a fighter jet cockpit has probably – apart from an F1 car perhaps – the tightest fit for the pilot or driver!”

Here’s a look inside the first two books in the fantastic Dinosaur series (the third book, Dinosaur Rescue!, will publish in January next year).

You can buy The Complete Calvin and Hobbes here (no home is complete without it). I could talk about Calvin and Hobbes (and dinosaur books) ALL DAY, so if you have a favourite of either, tell us in a tweet to @NosyCrowBooks or leave a comment below!

Nosy Crow is a ‘Teachers With Apps’ certified developer!