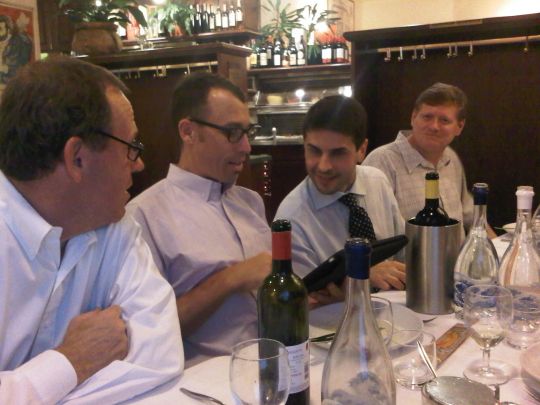 Editech, or Going Digital in Milan

It is now over a week since Kate came back from Editech, where she was a speaker, representing the UK, on a panel, and she’s failed to post about it. Editech’s the Italian Publisher’s Association’s digital publishing conference.

Italy’s another country: they do things differently there. They do conferences differently for starters. This did not work out well for Kate, who’d understood that she was there for a jolly chat about exciting digital topics with a chairman and questions from the audience rather than to do a slide presentation. How wrong she was. Hey ho.

But she ended up talking saying the following things:

The UK had better watch out: the digital market is a global market, and, while UK print looks and feels different from US print, she often can’t tell whether she’s on a UK website or a US website, and people won’t care. The UK’s print publishing industry depends on (1) the international use of English and (2) us seeing the world as our market (we publish more per capita than any other country and we can only do so because we sell outside our own market, while US publishers have such a huge market of consumers themselves that they haven’t had to focus on international selling as much). But much digital innovation is coming from the US, and without the hassle, time-lag, cost and stock-management issues of print publishing, they may eat our European lunch.

And the people who eat UK publishers’ lunch may be US publishers, but they may be people we’ve never heard of before, and certainly people who haven’t been around long. Traditional publishers will have to prove their competence and innovative skills in this new world.

From a children’s publishing perspective, particularly, she sees the smartphone and the iPad and other tablet devices as game-changers. There are over 100 million Apple touch-screen devices out there. She talked about the need to commission material for the device, rather than squashing existing intellectual property onto the phone. That’s what we’re doing at Nosy Crow: we think about what the device does, and think how we can use that to create or enhance a reading experience.

She said that the publishing industry has traditionally given away its relationship with readers to other people – to retailers. We need to build brands and to have relationships with our readers.

Finally, and, she thinks, most importantly, she said that she thinks that publishers need to decide what they are for. In the supply chain between author and reader, no-one has a place by right. As publishers, we have to earn our place. Publishers have historically earned their place by providing creators with up-front payments (advances) and investing in stock and distribution infrastructures. If stock becomes irrelevant, and distribution infrastructures become less expensive (no need for big cross-docked warehouses in digital land), what are publishers bringing to the party. We have to bring

Oh, she could bang on about this for hours, and probably will expand on some of this in later posts, but enough for now.

If you want to know what everyone else said, and there were interesting things said and interesting information provided (did you know, eg, that 65% of households in Italy have no broadband, and that 50% have no internet access?), Kate as @nosycrow put a fair old bit of it on Twitter with the hashtag (which she used pretty religiously) #editech10.

Other highlights were a nice saffron risotto and meeting other speakers, including Peter Balis (now, there’s a clever man) digital guru of John Wiley (now, there’s a savvy publisher), here showing off his iPad in a restaurant.