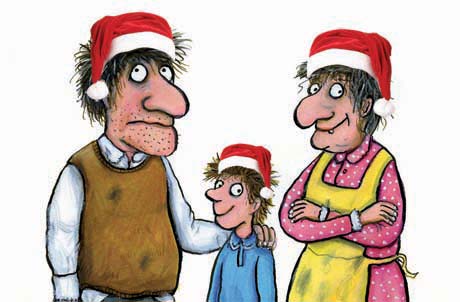 In a blog post for Harper’s Bazaar, Sam Baker lists the fictional families she wouldn’t want to spend Christmas with.

She included two families from children’s literature: the March family from Little Women (for the record, I would love to be part of the March family on any day of the year), and the Dursleys from the Harry Potter books (hard to argue with that).

Here are fictional families from children’s literature that the Nosy Crow team feels that we wouldn’t particularly enjoy pulling a cracker with:

I’d be a bit worried that Mr Darling from Peter Pan would mess up the day with one of his ludicrous ultimatum-based outbursts, and no amount of mawkish and self-indulgent attempts to compensate by sitting in a kennel would make up for the emotional trauma and indigestion.

Ola isn’t keen on spending time with Matilda’s family, the Wormwoods, from Matilda by Roald Dahl, who would watch the worst TV and never give books as presents. And she’s worried that the excessively blase parents from David McKee’s Not Now Bernard just wouldn’t notice if you weren’t there at all.

Tom doesn’t think he could spend Christmas with the Famous Five, on the basis that he likes to spend Christmas as lazily as possible, ideally sitting on a sofa watching Home Alone with a plate of mince pies, while the Five would want to break up a smugglers’ ring. He’s also doubtful his constitution would withstand a festive season with Mr Toad of Toad Hall, which he thinks would be likely to get out of hand. On the other hand, he feels that the wholesome piety and goodwill of the Cratchits from A Christmas Carol would grate after a very little while. I don’t think that A Christmas Carol is a children’s book, but he says the fact that there’s a Muppet version of it confirms that it is part of the children’s literary canon.

There’s a consensus that eating sprouts with Aunts Sponge and Spike from James and the Giant Peach would be no fun at all.

And, of course, the Grunts, though they love each other deeply really, would be unlikely to celebrate Christmas conventionally. A Christmas version of their roadkill diet doesn’t seem appetising, and Mr Grunt is an erratic gift-giver, having presented Mrs Grunt with a pair of barbecue tongs that she uses to pull out her nose hairs on one occasion and Sunny, the boy he stole from a washing line, on another.

Which families from children’s books would you not want to spend Christmas with?

Perfect Christmas book (and app) gifts for children of different ages from Nosy Crow: a post for Cyber Monday