Fixing the Future – a guest post by Alastair Chisholm

This month we’re absolutely delighted to have published The Consequence Girl,  a thrilling, unputdownable adventure, from Alastair Chisholm, the highly-acclaimed author of the Waterstones Children’s Book Prize-shortlisted Orion Lost and the Blackwell’s Children’s Book of the Year, Adam-2. And today we’re very excited to be sharing a guest post from Alastair!

The Consequence Girl is my third science fiction novel. It’s about Cora, a girl hiding in a world ruined by a mysterious ancient disaster. Chased from her hiding place, she meets others for the first time, and learns about an amazing power she has – one which could change literally everything…

It’s an adventure story, a chase story, and a mystery. But actually, it’s about how we deal with disaster and grief, how we overcome feelings of powerlessness, and how we live in the face of fear for the future.

Actually, it’s about a girl on a mountainside.

I love writing science fiction. I grew up immersed in sci-fi (I still remember queuing for The Empire Strikes Back, standing on tiptoes because I technically wasn’t old enough to get in!). Oh, sure, I liked magic, too – but sci-fi was cool. Sci-fi comes from our world – from things that might actually happen, machines we might actually invent. I love that the people in these stories really could be us.

And so for me, when an idea first starts, it’s with a person. My first novel, Orion Lost, was someone waking up alone on a starship, a billion miles from home. My second, Adam-2, was a boy in a basement. And this one was a girl – Cora – standing on a snowy, pine-covered mountainside.

Who was she? Why was she on the mountainside? Where was everyone else? Was she hiding? Who was trying to find her? I had no idea, but she stood there, and I had to work it out.

Cora, I realised, has a power. She can look at something that happens – a coin toss coming up heads, say – and see all the tiny events that led to it. The flick of her thumb on the coin, the air currents as it flew, the way it hit the ground and bounced. And then she can ask: what if things were just slightly different? If my thumb twitched slightly as I flicked? If the coin bounced just a little differently? What would happen?

Cora can see every outcome – and once she has one in her head, she can fix it in place. She can rewrite history.

She can change the world.

And boy, sometimes it feels like the world needs changing, right? Scary events in the news can make us feel like we don’t have any control. It’s clear that the grown-ups don’t always know what they’re doing. Weird politicians make weird decisions and tell us that this is what we agreed to, while actual climate disasters are ignored. Old prejudices and intolerances have raised their horrible heads – in fact, we’re inventing new intolerances, like we don’t have enough…

I thought, what would I change, if I could? And then I thought – how would I ever stop?

Cora’s world was ruined by some disaster – an apocalypse that broke everything. It’s taken a hundred years for society to get going again. But it’s not a dystopia. There’s food, and power, and schools, and shops. There are police, and a free press, and an elected government, and freedom of movement. It’s not dystopia – in fact, in some ways it’s a lot like our world.

But the government are trying to control the press. And the police are getting a bit heavy-handed. And there are artificial shortages, and policies designed to create fear amongst the population. It’s not dystopia, but it could be.

And I wanted to show this world, and how different people react to it. Some hide away, living alone with their grief. Some revel in nostalgia, trying to return to “The good old days”. Some want to burn it down and start again. Some want to control it, lock it down tight as if people were numbers on a spreadsheet. Cora has the power to do any one of those – but which one?

Of course, I love sci-fi adventures. So first she must escape explosions, flying cars, evil security bosses and all sorts of danger! And she has no idea who she can trust, and things are going to get very dark indeed…

I hope you enjoy The Consequence Girl. I loved writing about Cora (and her guardian, the amazingly kick-ass Lilith!). As I was writing, I came across this quote from Thomas Paine, the politician and philosopher, who understood something amazing. Many years ago, he said:

I think about this a lot. We have that power.

How are we going to use it?

Thank you, Alastair! You can order a copy of The Consequence Girl from Waterstones here, Bookshop.org here, or Amazon here. 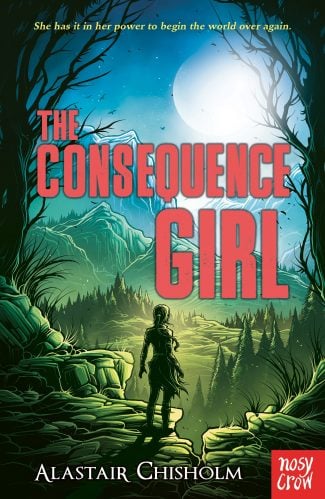