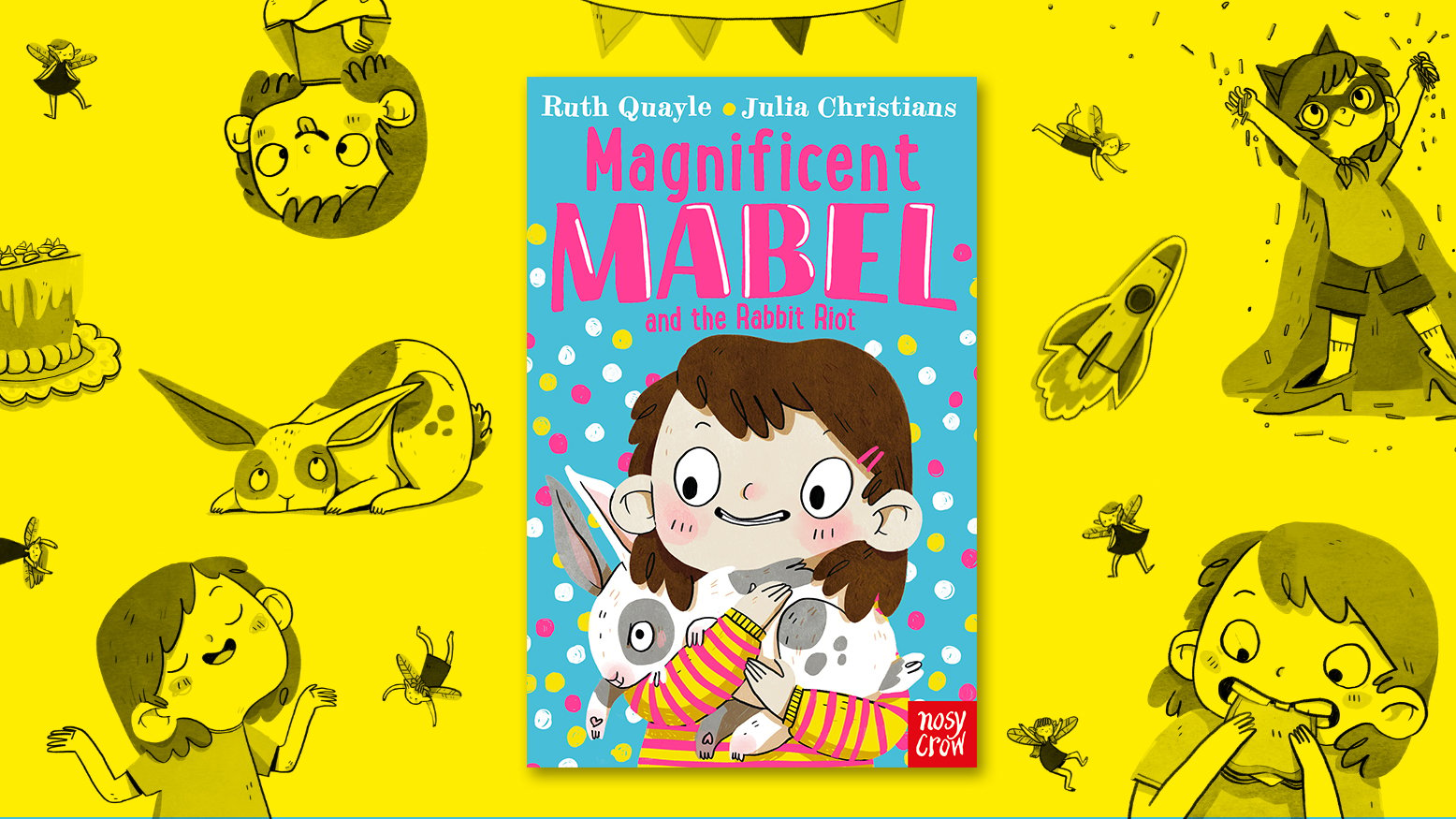 Getting to Know Mabel – a guest post from Ruth Quayle

Earlier this month we published the first in a hilarious, one-of-a-kind new fiction series for young readers – Magnificent Mabel and the Rabbit Riot written by Ruth Quayle and illustrated by Julia Christians. And today we’re very excited to be sharing a piece from Ruth herself, on the inspiration behind Mabel…
____

Mabel Chase waltzed (well, stomped!) into my life a few years ago. She landed slap bang on the page, full of ideas and raring to go. She knew EXACTLY what was going to happen without being told and she was always one step ahead of me. There was just no stopping her!

No wonder I jotted down the first Mabel book really quickly. I wrote it in a local café because it was January and my house was freezing cold. When I told my children I was working in a café they were pleased. They assumed I meant REAL work, i.e. serving coffee and clearing plates. They almost cried when I told them I was writing stories on my laptop. “But, Mum,” they wailed. “Writing doesn’t count as work.”

They’re wrong of course – I’m the first to know that writing can be REALLY hard (especially picture books!). But they are also right because writing about Mabel didn’t feel like work. As Mabel herself might say, it was not even one bit hard. It was fun!

I think this is probably because, although Mabel Chase is a brand-new character, it feels like I have been getting to know her for a long time. Perhaps because I was once a bit of a Mabel myself.

Some people in my family would probably say that, like Mabel, I did more than my fair share of stomping when I was growing up. But SOME people in my family didn’t understand how hard it was not being the oldest OR the youngest and they didn’t have a clue how UNFAIR it was that I was the only person in my class who didn’t have a Dash tracksuit. Those parents of mine didn’t even get me an ACTUAL FAIRY for Christmas!

Books were great because they introduced me to lots of other versions of Mabel. I read all sorts of books (as many as I could get my hands on) but my favourite characters were the ones who weren’t necessarily good. For instance, I didn’t have much time for Charlie in Charlie and the Chocolate Factory (I preferred Willy Wonka) and I wasn’t mad about Wendy in Peter Pan but I adored Pippi Longstocking, William Brown, Ramona Quimby, Petrova Fossil and Toad in Wind in the Willows. These characters were often quite naughty and they were sometimes rude and grumpy but they weren’t BAD. They were occasionally quite GOOD. Importantly they were a bit of a mix – and all the more interesting for it. They were also funny. So I popped them in my head and there they stayed, slowly evolving as the years went by.

I’ve never stopped reading but I have stopped stomping – well, most of the time! And although I’ve mostly forgotten how to disappear effortlessly into an imaginary world of play I’m lucky enough to have three children of my own who, along with their cousins and friends, remind me what it is like to be a small child with a big imagination – a bit like Mabel. They’ve given me NEW versions of Mabel. I love seeing them magic themselves into invented characters and I always take seriously their fear of the tooth fairy.

And of course, there is the stomping. Always the stomping. For example, when my then-six-year-old caught me reading a book called How to Talk So Kids Will Listen, he looked at me crossly and said: “I’m not going to fall for any of those tricks”. And once, on the first day of the school holidays, when we’d made hot-cross buns, ridden the new scooter AND done some gardening, he said: “But when are you going to give me loads of attention?” It was maddening but it was also really funny. It was another version of Mabel.

Right now my daughter and niece are at a wonderfully imaginative stage. I love listening to them chat and play. In some ways they are Mabel, and in some ways, they aren’t. They are versions of her. And like all the other versions I’ve met along the way (in real life and in books) they have played their part in helping me create Mabel Chase.

In other words, even though I wrote the book really quickly, Mabel herself has been a long time in the making. She has, in fact, been in my head all this time, impatiently waiting to burst out, land slap bang on a page and star, magnificently, in a book of her own.

You can take a look inside Magnificent Mabel below: