I’m very excited to see Frank & Bert being published. It’s a book about friendship and how it’s not always easy getting it right, staying true to your friends and being happy with yourself.

The starting point of this book was a very simple sketch/doodle that came out of nowhere, of a big strange looking animal stood behind a thin tree. I wrote a caption under it explaining how this animal was brilliant at hiding in plain sight and incredibly hard to spot, even though it was stood there as plain as day. I liked this idea, a bit like when children try to hide and think that if they can’t see you, then you can’t see them.

I wanted to make a story out of it and came up with the idea of a duo playing hide and seek – one of them (Bert) being terrible at hiding but doesn’t know it. I came up with a first draft that hadtheidea of a hand-knitted scarf that gets snagged and sent it to my editor, Lou Bolongaro. She saw the potential of the two characters and the set-up but asked me to explore a few more variations.

In the end I proposed four or five different versions, they always started the same but then went in different directions: bear disguised as a rock and fox inadvertently sitting on him, bear hiding in a river bed until it rains and the water’s up to his nose, bear getting lost in the woods, even bear going into a café full of bears and putting a lampshade on his head, thus giving himself away.

We eventually settled on the final story and then ironed out all the plot wrinkles, and for such a seemingly simple tale it took a lot of smoothing out, making sure it all made sense and didn’t feel contrived – that’s always the hardest part of writing stories. For ages Bert was so sure of his hiding skills he offered his scarf as a prize for Frank finding him but the fact that it got unravelled made this a bit awkward – it just didn’t work right. It took ages to realise that that didn’t need to happen and the story might work better without the high-stakes of a favourite scarf to play for!

But the essence of the story was always about friendship – what it’s worth and how it can be tested sometimes. That’s what we were always wanting to bring out and highlight. I also wanted to be really careful that Bert, though not appearing to be the sharpest of the duo, is no fool either. He had to have a little conspirational moment with the reader that Frank isn’t entirely aware of, otherwise the friendship felt unbalanced and Bert a little patronised.

The image of a fox sat on a chair knitting really grabbed me. It seemed an odd thing for a fox to be doing so it felt nice to try and explain what was the story behind it was, and give Frank a very chatty, anecdotal voice. The scarf is is almost a character in itself so it was given a very bright pink colour to make it pop out of the muted landscapes. That was always going to be a big part of the book – following the bright trail of colour through the hills and trees and water, until we catch up with Bert.

I hope readers old and young really feel the relationship and love between Frank and Bert and the sense that no friendship is perfect – it sometimes needs a bit of work and compromise to make things ok.

Yet again, it’s been a joy to work with all the team at Nosy Crow. Making a picture book is sometimes a bit like a friendship – there are always little debates, discussions and compromises along the way but when you trust each other things always work out fine in the end. And again, Lou Bolongaro and Nia Roberts guided and encouraged me along the way, even when I thought I’d run out of ideas, and helped bring Frank and Bert (and the hand-knitted scarf!) to life.

And as Frank & Bert is all about friendship, it’s dedicated to my best friend, Steve Adams, who very sadly died in the summer of 2021, just after the book was finished. He was a really brilliant, lovely, talented man. Sometimes I would send him story ideas when I was stuck – usually a couple of alternatives to ask which he thought was the best or funniest. He always made the right call and he was a big help on Frank & Bert especially. He was an absolutely top person and is much missed by everybody who knew him. 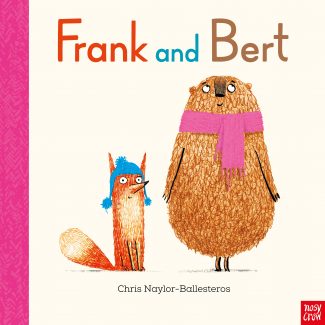 Welcome to The Escape – a guest post by Christopher Edge