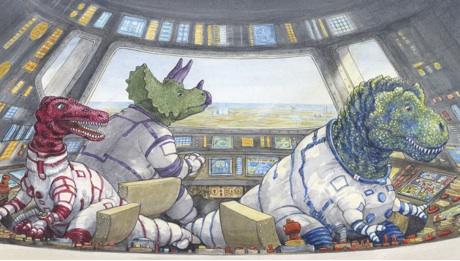 How I made Dinosaur Rocket: a guest post by Penny Dale

Today’s guest post is by Penny Dale, creator of the Dinosaur picture books, on how she made the latest book in the series, Dinosaur Rocket.

It’s hard to believe that this is the fourth book in the Dinosaur series!

After digging and zooming and rescuing, the dinosaurs have become very proficient at driving land-based vehicles, but haven’t yet clocked up many flying hours. A couple of them have piloted a helicopter, but that’s about it. So I started to think about whether I could squeeze them into planes, or even rockets!

A mission to the moon began to emerge as the favourite for their next adventure. The amazing advances in technology that happened in the early years of human space flight, and particularly the camaraderie, teamwork and group endeavor that made it all possible, were very inspiring.

So, the challenge… How to get three enormous dinosaurs to the moon and back in the twelve, double page spreads available?

When starting to plan a picture book there are many things to juggle. If like me you are illustrating it as well, words and pictures can develop simultaneously.

I nearly always start with a storyboard and a written text draft side by side, and move from one to the other.

Here’s the storyboard in development, looking fairly close to the finished pages of the book, (but in fact one spread, that shows them looking back at the earth, missing home, was added later on – shown here at the end).

Then comes the research. I’m always trying to convey the feel, and some of the realism of the actual vehicles and machinery. I know children appreciate this sort of detail, but these massive rockets and fiendishly complex launch towers proved to be a BIG challenge. I couldn’t just copy reality – for a start it’s not designed for dinosaurs! And whilst one can sometimes draw something complex once, repeating it from a different viewpoint is much more difficult. Also there were extreme perspective challenges. Like looking across at the top of the launch tower and at the same time, down at tiny distant vehicles on the ground.

So… I had to design a rocket and capsule to fit the super sized astronauts, and space suits to fit over tails and claws. Easy to say, tricky to do! Try fitting a space helmet on a Triceratops! Or get a T Rex’s little arms to reach a control panel!

And whilst I managed with just drawings for the spacesuits, I made a model of the rocket and tower, which really helped to sort out the perspective.

Unsurprisingly no actual moon buggies exist that would fit a dinosaur, so I had to design those too. One can make things up to an extent by looking at the actual thing, but to get the proportions to feel right, I need to have something real to base a drawing on.

Thanks to Lego in this case…Cardboard and plasticine in others.

Flour and icing sugar for the surface of the moon.

So…after a few months of preparation, the actual colour artwork can begin. I start with a fairly detailed black and white sketch – sometimes re-worked on the iPad – that I print out the same size as the artwork, and trace down onto watercolour paper.

Then I work on each spread, using an ink or pencil or crayon outline, adding watercolour and more crayon for tone and definition.

This shows work in progress, with an earlier page of finished artwork top left for reference and continuity checking, like details on the space suits.

At this stage the text may still alter slightly to fit the illustrations better. Or the other way round, but because I work closely throughout the whole process with an editor and a designer, small improvements and changes can be incorporated as the whole thing comes together. Like the dinosaurs, I love working as part of a team, and especially with the great collaborators that I’ve been lucky enough to have at Nosy Crow.

I think of these books as part fiction and part documentary. I hope children will get an idea of what’s involved in similar ‘real’ situations. I hope they will be able to decode sub stories from the pictures, and to get an exciting sense of team or group endeavor… of shared emotions, solidarity, daring and fun.

And of course, in the end, when the book is published, I do have to remember how it started as it’s a few months since I finished working on it, and I’m now well underway on something completely different! All I can say about that at the moment, is that the dinosaurs will need their sea legs!

Thank you so much, Penny! Dinosaur Rocket is out now – you can buy it online here, and take a look inside below.

Surviving on the App Store