How Nosy Crow got its name - Nosy Crow Skip to content 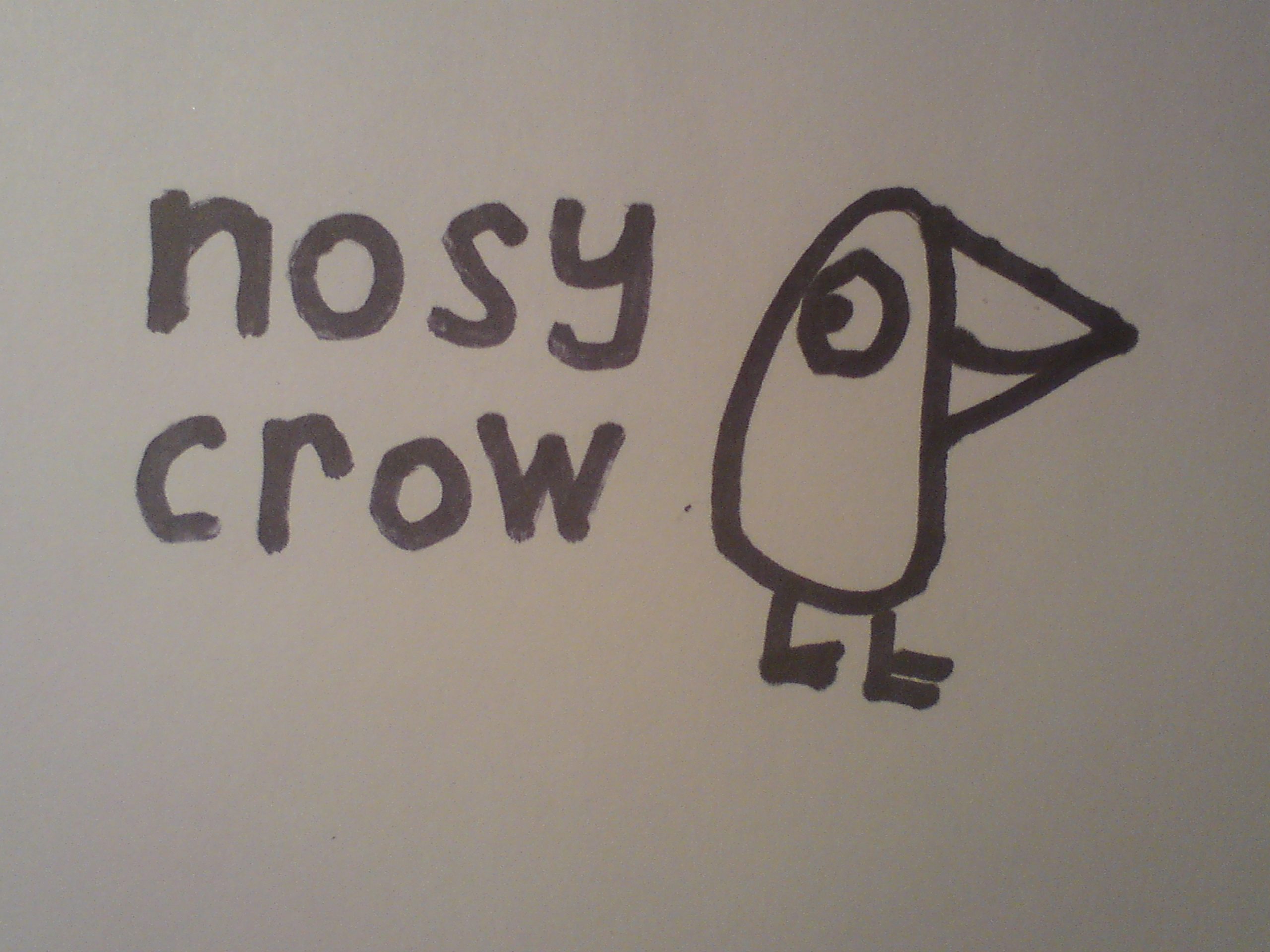 How Nosy Crow got its name

Five years ago today, we registered the domain name nosycrow.com.

I’d been fired in the October of 2009, and had pretty much immediately decided that I wanted to set up a children’s publishing company. Adrian, my husband, was part of the plan from the beginning, and I’d asked Camilla, who I knew from my time running Macmillan Children’s Books and who was combining writing children’s books with looking after her young family, if she’d like to join us.

While working on the details of our business plan, I spent time, in December 2009, looking for a company name.

I ideally wanted a company name with an animal in it: I wanted a logo with a face – something with a bit of character and something that we could animate, because we’d decided that we wanted to create digital products as well as print products. For my previous fifteen years in children’s publishing, I’d worked with perfectly elegant and classic logos, but ones that weren’t terribly characterful.

I wanted a dot com URL: we knew that we wanted to sell our books and digital products internationally and a dot com URL really helps us do that, particularly in the USA.

I wanted a URL that didn’t have “books” or “publishing” or “press” in it: we knew that we wanted to create digital products as well as print books.

If you try – and you do this at home easily – entering any common adjective (and we couldn’t have anything too recherche: this was to be a children’s publishing company) plus the name of any animal into a domain name registration site you will discover that pretty much any combination you come up with, from brown bear to purple pangolin, will be unavailable as a dot com URL.

Discouraged, we started considering non-animal names, but nothing really stuck. After lunch on 28 December 2009, I was sitting with my laptop at the kitchen table in my parents’ house in Edinburgh crossly punching into a domain registration site adjective and animal combinations to find them all taken, and my brother came in to make tea and asked what I was doing. I explained our frustration, and he suggested Nosy Crow. This was the name of a children’s book character he’d suggested in the course of a wine-fuelled Christmas dinner several years previously, that I’d laughed out of court. When he suggested it as a company name, I sighed, told him it was a stupid name, and said that the dot com URL would be taken anyway. I entered the name to demonstrate my point. But Nosycrow.com was available.

The more I thought about the name, the less ridiculous it seemed and the more I liked it. It felt as if it could span the age-group (0-14) we were publishing for in a way that Fluffy Bunny or something similar would not. It had assonance. It had a face. It felt distinctive. That afternoon – I’ve just looked up the correspondence – I sent Camilla a two word email: “Nosy Crow?”. She replied, “I like it. It has a cheekiness and feels modern.” Later that afternoon, after more exchanges, she said, “I think older children would be turned off by – I think they sound too safe. Nosy Crow has an energy and a humour.”

In the New Year of 2010, Camilla and I met in the cafe of The Wellcome Collection, which was to become the office of the company for the next few months. We’d agreed on the name, though one of our potential shareholders – who didn’t end up investing – didn’t like it. In my notebook, I scribbled an impression of what I thought a logo might look like. Camilla looked quizzical – I am not an artist – and said that she thought that the logo should look more like the picture she then immediately drew on a page of her notebook – which I’ve reproduced at the top of this blog post.

Though neither of us could quite believe that it could be that easy to create a logo, I loved what she’d drawn – it had the cheeky freshness that we liked about the name. It wasn’t quite right, though. We flipped the image so that the crow’s beak pointed left; we elongated the beak using Photoshop; and Axel Scheffler redrew the legs – and did the logo lettering.

We still had a year to go before the company started publishing, but we felt that we were on our way.