I’m super happy because, after a small, pandemic-induced delay, next month we are launching Peekaboo Apple and Peekaboo Bear, the first two titles in our exciting new novelty series with Ingela P Arrhenius, illustrator of our award-winning, best-selling Felt Flaps series.

Just over five years ago, Zoe Bennett, Nosy Crow’s deputy head of design (and novelty-book design genius) had suggested that we think about doing something with Ingela and I immediately thought it was an inspired idea. I had admired Ingela’s work for many years, going back to my days when I was editorial director of Campbell Books, and Ingela was known as Ingela Peterson. We used to optimistically bring her work to acquisitions meetings and were forever being told by sales teams that it was too ‘high-end’ for our markets. Sigh.

But fast-forward to 2015 and my hunch was that tastes had shifted ­– I felt that the market was getting ‘posher’ in its sensibilities. On top of that, as a founder–director of Nosy Crow, I enjoyed a good deal more autonomy in terms of what I commissioned so thought we could probably push this through. By happy chance, I had been developing a felt lift-the-flap concept with our production team and with Zoe’s timely suggestion, the Felt Flaps series crystallised very quickly. The sample dummy of Where’s Mr Lion? that Zoe and I mocked up (using artwork ‘borrowed’ from Ingela’s website) to present to the sales team looks remarkably similar to the final version – with the addition of a mirror ending, an excellent suggestion from Catherine Stokes, now our head of sales and marketing.

The first title launched in January 2017 and the series has since become one of our bestsellers – approaching 3 million sales worldwide now. Where’s Mr Lion? won the Sainsbury’s Children’s Book of the Year in 2017, and the series is showing no sign of flagging – 19 titles, 19 foreign language editions, and a forward programme that stretches into 2022.

Having said all that, it wasn’t long before it dawned on us that however successful the Felt Flaps books were, there was still scope to do another novelty series with Ingela. She is an enormously versatile artist who works quickly and instinctively. Zoe, Ingela and I are lucky to have an enormously positive working relationship with great trust on either side, so I guessed that if we could think of a good enough concept, that didn’t cannibalise the Felt Flaps’ market, the chances were that Ingela would want to do it.

On the question of what novelty to use, I felt that the answer lay with our old friend the slider mechanism. Our Bizzy Bear, Tiny Tabs and Sing Along With Me series have all used sliders in one way or another, and have been very successful for us. Sliders are a fun and engaging device to catch the child’s attention and invite them to interact with the book. We hadn’t gone so young before with sliders, but if the books functioned as a series of ‘peekaboo’ images – always popular with tinies ­– I felt that it could work.

I’m really pleased with the way they turned out – I hope you’ll take a look at them. Whereas both Bizzy Bear and the Sing-Alongs each have five sliders, by using both sides of the slider, the Peekaboos are able to have 10 distinctly different sliders, a mirror ending AND a rhyming text, too! We truly maxed out!

Ingela’s artwork is, of course, delicious – edgy and friendly in equal measure. Whereas in the Felt Flaps we had only used naturalistic animals, the Peekaboo books have a mix of ‘real’ characters – bears, dogs, butterflies – and also the non-real – so everything from mushrooms to socks, to doughnuts have faces! This gives each title a fun, quirky feel that I think will be enjoyed by little readers, and their grow-up companions too.

Anyway, I’ll wrap up with some words from Ingela, talking about her experience of developing this series:

“It has been, and IS, so much fun working with the new series Peekaboo. In these books we try to work even more simple and graphic than the Felt Flap series since this can be the very first book the baby interacts with. Since I love faces and always want an image to have eyes (or letters) in them, this was a perfect challenge.

And as always, it’s a pleasure working with Camilla and Zoe, who do very well thought-out preparatory work and then we have a creative cooperation.

I love how they turned out, they feel very stylish but still childish. And durable, too!”

Do let us know if you agree!

Take a look inside Peekaboo Apple:

Take a look inside Peekaboo Bear: 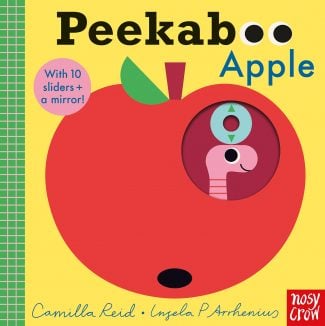