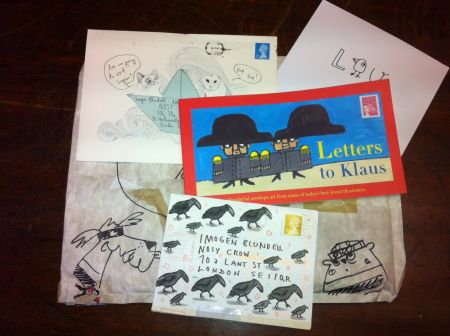 Letters to Klaus… and other decorated envelopes

One of the great joys of working with illustrators is that they can’t stop themselves illustrating.

One result of this is our growing collection of crow pictures from our illustrators (which we’ve blogged about before), displayed here on our tree-wallpapered wall in our office:

Another result is the envelopes that we get from illustrators that have hand-drawn images on them, often, but not always, of crows.

Honestly, Axel Scheffler has been the most prolific envelope-illustrator in the Nosy Crow pantheon. We have a Pinterest board dedicated to his envelopes, but even the envelopes-within-the-envelopes that he sends are sometimes decorated, often with rubber stamps that Axel carves out of pencil erasers:

Axel’s not the only illustrator who decorates envelopes, as you’ll see from the picture at the top of this post. I particularly like Steven Lenton’s big envelope with Shifty McGifty and Slippery Sam on it at the bottom of the picture – the one underneath the others. He couldn’t resist using a marker pen on what was already a bashed-up, reused envelope. He even apologised for the state of the envelope!

And since I took the picture at the top of the blog post, we received this particularly lovely example from Sebastien Braun:

Anyway, the reason I was thinking about decorated envelopes is that I was invited to the opening of The Illustration Cupboard’s summer exhibition of decorated envelopes last week. The envelopes displayed include a remarkable group of envelopes addressed to legendary and charming Klaus Flugge, who founded Andersen Press in 1976, and has led it ever since. He has therefore had several decades in which to amass his collection. On one envelope, David McKee collaged a photograph of Klaus into the image:

Pictures of the envelopes have been collated into a book, Letters to Klaus (pictured above, at the centre of the image at the top of the blog post), all proceeds from which go to Save The Children, and which is available through independent booksellers