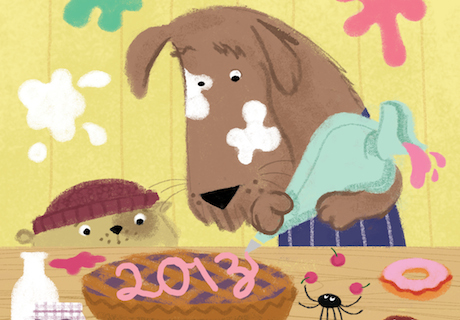 Looking back at 2013: our third year of publishing

We’ve been publishing books and apps for three years.

Sometimes it seems like a lifetime since we founded the company, but at other times it seems as if I have only had time to blink since we got the keys of the first Crow’s Nest (we’re now in the third).

I wrote a blog post looking back on 2011, and one looking back on 2012, so I feel I’ve rather started a tradition. As is often the case with our blog posts, while we really hope that you’ll like reading them, they also serve an important kind of diary function for us, marking milestones and reminding us of what we felt and thought about things at different stages in our development.

We were more delighted than we can say – and very, very surprised – to win the Independent Publishers Guild’s Children’s Publisher of the Year award for the second year running in March 2013. At the same ceremony, we won their International Achievement award, and we were shortlisted for their Digital Publishing and Digital Marketing awards. We were also shortlisted for the Bookseller Industry Awards Children’s Publisher of the Year and Digital Strategy of the Year awards.

Our awards from our first three years of publishing, for Nosy Crow as a company and for individual books and apps, now require two shelves

We decided that we’d give away a free digital audio book with every one of our paperback picture books: it’s a modern take on the Fisher Price cassettes my own kids used all the time as children, it works for parents, and it enables every bookshop to offer a digital component packaged with a print sale. So we launched Stories Aloud, and downloads, within the year, topped 100,000.

Art by Sarah Massini that illustrates all of our Stories Aloud marketing material. You can scan a code to hear a story buy using the QR code on the Stories Aloud tab on the website (see the link above)

We ran our first conference, attended by 150 people.

We launched a (usually seriously oversubscribed) monthly children’s book reading group, which has, so far, met six times at the Nosy Crow offices, and which is covered by The Guardian on its website.

And we launched an ambassadors’ programme, The Nosy Crow Crew.

SELLING OUR BOOKS AND APPS

Nosy Crow’s sales in 2013 were over £3.4 million, comfortably more than a million pounds up on 2012 sales… which were over a million up on 2011’s sales (2011 was our first year of publishing). The back-of-the-envelope sums we did while we were founding the company back in 2010 turned out to be pretty accurate.

In 2013, according to the book data experts Nielsen, we broke into the top 20 biggest children’s publishers by UK sales to customers – which I think is a really remarkable achievement for a publisher without a backlist and without a YA list. In the top 25, we were one of two publishers with growth of over 100% (the other was Phidal). Excluding sales to John Lewis, who don’t choose to contribute to the data, we ended the year the 13th biggest publisher of picture books. And we were the the 17th biggest for children’s fiction. We’re grateful to Bounce, whose enthusiastic, knowledgeable and hardworking sales team gets our books everywhere from the post office and general store in the Herefordshire village of Longtown (population 543) to national bookshop chains, independent bookshops, supermarkets, toy shops, galleries and museums and online retailers.

As well as attending the London, Bologna and Frankfurt Book Fairs, this year we also attended the Warsaw Book Fair and the first Chinese International Children’s Book Fair in Shanghai. We sold rights for the first time in Hungarian, Czech, Slovak, and Bulgarian, bringing the total number of languages in which we’ve sold rights up to 23. We’re hugely grateful to our international partners, Candlewick Press, Allen and Unwin, Gallimard Jeunesse, Gottmer and Carlsen Germany, who continue to support us and whose editorial insight and specific market knowledge inform our publishing.

Kate in Shanghai with Yolanda Tang from our Chinese agents

When the Apple App Store launched its kids’ category in October, one of the main sections was Interactive Kids Stories. Of the 38 titles featured in on the US store on launch day, 10 were Nosy Crow’s (our only other app – at the time – isn’t a story). This kind of support from Apple – combined with the excellent review coverage that each of our apps receives and the enthusiastic word-of-mouth they produce – generates unusually strong sales on the store, despite the relatively high price of our apps.

We launched a few notable debut illustrators (or author/illustrators) in the year – Nicola O’Byrne, Elys Dolan and Steven Lenton – and we launched one debut author, Michaela Clarke. It’s a privilege to be entrusted by an author or illustrator with any book, but a particular pleasure and privilege to be entrusted with a debut. We were also very chuffed to publish for the first time on the Nosy Crow list other respected authors and illustrators – among them Emma Dodd, Sarah Massini, Alison Murray, William Bee and Fleur Hitchcock – who had already been published elsewhere. But it’s worth saying that almost two thirds of the books we published in 2013 were by authors and illustrators that we’d published in our first two years of publishing: 2013 was a year in which we – very happily – kept the faith.

We released two apps in 2013 (though it’s worth saying that our Rounds: Parker Penguin app, which won the 2013 Futurebook Best Children’s Digital Book Award, was only a 2012 release by the skinniest skin of its teeth). We decided that we would focus on creating a small number of really remarkable apps. In April, we released Little Red Riding Hood, which led to USA Today saying that we were “the Steven Spielberg of apps” and which is currently shortlisted for a Digital Book World award. In September, we released Axel Scheffler’s Flip Flap Farm, shortlisted for the Futurebook Best Children’s Digital Book Award.

Following the success of The Snowman’s Journey, the own brand book we created for John Lewis for Christmas 2012, we published a second own brand Christmas book for John Lewis, The Bear Who Had Never Seen Christmas, and a Christmas gift book for Radley London, Radley’s Twelve Days of Christmas.

The Bear Who Had Never Seen Christmas book, made for John Lewis and based on their Christmas 2013 TV advertisement

WHAT WE SIGNED UP

Of course, while we were busy publishing the 2013 titles, we were also acquiring books for 2014 and beyond. 2014 was planned as a year of consolidation, in which we didn’t increase our title count. At the moment, we plan to publish 55 books, so actually we did increase the size of the list a little… but what can you do when you’re faced with great books that you want to publish? 2015 is planned as – and is already shaping up to be – another year of rapid growth.

In the early part of 2014, we are particularly excited that we’re launching two debut novelists, Pamela Butchart, whose Baby Aliens Got My Teacher publishes this month, and G. R. Gemin whose Cowgirl publishes in March. Meanwhile, we have picture books from Chris Mould, Lawrence and Catherine Anholt and novels by Holly Webb to look forward to, all of whom are publishing with Nosy Crow for the first time this year. But we are, of course, still keeping the faith: there are new books by Philip Ardagh, Axel Scheffler, Benji Davies, Penny Dale, Ros Beardshaw, Joe Berger, Paula Harrison and Tracey Corderoy among other creative talents who are the backbone of the Nosy Crow book list.

As in 2013, and in line with our “year of consolidation” plan, we’re going to focus on releasing a few very ambitious apps this year, the first of which, Jack and The Beanstalk, a spectacular addition to our roster of fairy tale apps, will be released in the next few weeks.

PRIZES, SHORTLISTINGS AND PRAISE FOR OUR BOOKS AND APPS

I mentioned a few of our app prize wins earlier, and posted our shelves of awards. We were particularly proud of our UK regional award wins and many shortlistings this year. Chris Edge won his category in The Stockport Schools Book Award with Twelve Minutes To Midnight. Caryl Hart and Sarah Warburton won their KS1 category in The Oldham Brilliant Book Award and, on the same day, Jo Lodge won the Sheffield Children’s Baby Book Award category with Icky Sticky Monster.

We published three of the 12 books on the Roald Dahl Funny Prize shortlist: Weasels, Troll Swap and The Grunts All At Sea.

Three of our books were included in The Reading Agency’s Summer Reading Challenge 2013: Shifty McGifty and Slippery Sam, Vulgar & The Spooky School Trip and Shadows of The Silver Screen.

Over the Christmas holidays, Shifty McGifty was a Bookaboo book.

In 2013, we had 173,000 unique visitors (up by over 50,000 on 2012) to the Nosy Crow website. As well as using the website to provide information and news about our company, our books and apps, our events, and our submission guidelines, we blogged every weekday this year, with blog posts like Deaths in children’s literature that we will never get over drawing comment not only on the blog but also on Twitter.

Nosy Crow authors and illustrators were at numerous literary festivals, including Hay, Edinburgh, Bath and Cheltenham, and staged countless events in schools, libraries and bookshops.

We welcomed two babies this year.

Giselle gave birth to Amelie in May, but has decided that being an out-of-London-based mum of two is even more compelling than being a senior designer for Nosy Crow, so she is leaving us, which makes us sad, but we understand.

And in July AJ’s third child, Lily Grace, was born… and he’s not going anywhere, we are happy to say.

Zoe Bennett, who covered Giselle’s maternity leave and has now taken on the role of senior designer, was our only new member of the Nosy Crow team in the year (I said that 2014 was supposed to be a year of consolidation…) but Ola and Kristina were both promoted in the course of the year and we are about to announce a vacancy or two in addition to the design assistant that we’re currently recruiting.

Though I, for one, felt my energy stocks were slightly depleted by the end of the year (nothing a sofa, a few books and industrial quantities of Christmas cake couldn’t remedy, of course), 2013 was a very good year.

Steven Lenton (who did the picture at the top of this post), Ola, Zoe and Kristina celebrating 2013 at the Nosy Crow Christmas Party

Here’s to 2014, and to your health, happiness and success, as well as our own. Thank you if you published with us; supported us by reviewing, blogging about or talking about us or our books or apps; bought something we published for your shop or your library; or bought one of our books or apps to share with or give to a child. We hope they enjoyed it as much as we enjoyed making it.

Baby Aliens is a Children’s Book of the Week