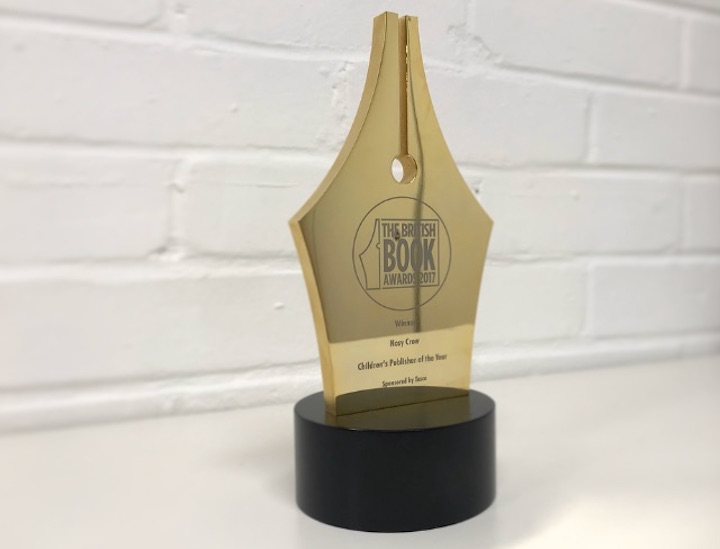 Looking back at 2017: our seventh year of publishing

Each January – sometimes right at the turn of the year, sometimes, as this year, a bit belatedly – I write a blog post looking back at each year that Nosy Crow has been in existence. Here’s last year’s, for example.  It is, I know, done as much for me as it is for readers – an exercise in record-keeping, really – and I fully acknowledge that it’s probably much more gripping for me to write than it is for anyone to read.

2017 wasn’t, in terms of world events, an improvement on 2016. Trump’s dangerous and stupid Twitter rhetoric was a daily distraction (and only this week, John Sargent, CEO of Macmillan USA, was forced to write this); terrorism struck countless times around the world and, with the attack on London Bridge and Borough Market, painfully close to home for Nosy Crow; Brexit dominated UK news, but negotiating the consequences of the lamentable decision to leave the EU was sluggish and dispiriting; and some great people died – Babette Cole and Michael Bond died, and so did John Noakes and Brian Cant, and those are just the high-profile people in the world of UK children’s media.

And of course we thought about and were saddened by these things and many others, but, for Nosy Crow as a business, 2017 built on the remarkable success of 2016.

We ended the year with revenue of over £10 million (and we made a bit of profit, which we plough instantly back into the business). That’s twice the turnover of 2015, so we’ve doubled in size in two years. This is a hugely important milestone for us: when we were putting together the business plan for Nosy Crow back in early 2010, we said that, one day, we believed that it was possible for Nosy Crow to be a profitable £10 million business. We said that it was maybe conceivable to imagine this happening after 10 years of publishing. It happened after seven.

We published 99 original books in 2017 (plus paperbacks and board books of hardbacks), just four more original books than in 2016. The balance of our list wasn’t radically different from 2016, which was the year we began publishing non-fiction and activity books, as well as board, picture and fiction titles. We did, however, properly launch our list published in collaboration with the British Museum (we’d published a single title in 2016 to tie in with an exhibition), and our Early Learning at the Museum ABC and 123 board books were included in The Sunday Times’s Children’s Books of the Year selection.

We held our place as the UK’s 13th biggest children’s publisher, based on Nielsen’s recorded sales out of UK retailers. We closed the gap between us and our nearest competitor (Simon and Schuster, since you ask, though they are still 1.5 times our size). In 2017, £1.38 in every £100 spent in the UK on a children’s book was spent on a Nosy Crow book – up, woo-hoo!, 8 pence on 2016.

Though we increased our market share and grew our sales in the UK, actually our biggest areas of sales growth were outside the UK. More than half our sales came from outside the UK, and we added four new languages (Farsi, Luxembourgish, Ukrainian and Albanian) to bring our tally of languages in which we’ve sold rights to 39. Though we found customers around the globe, we sold particularly well to the USA, China and Italy in 2017. (If you are a foreign publisher or a scout, and would like regular updates about our rights activity, email [email protected] to be added to our rights newsletter mailing list.)

In March, we won, for an astonishing fourth time in six years, the Independent Publishers Guild’s Children’s Publisher of the Year Award. 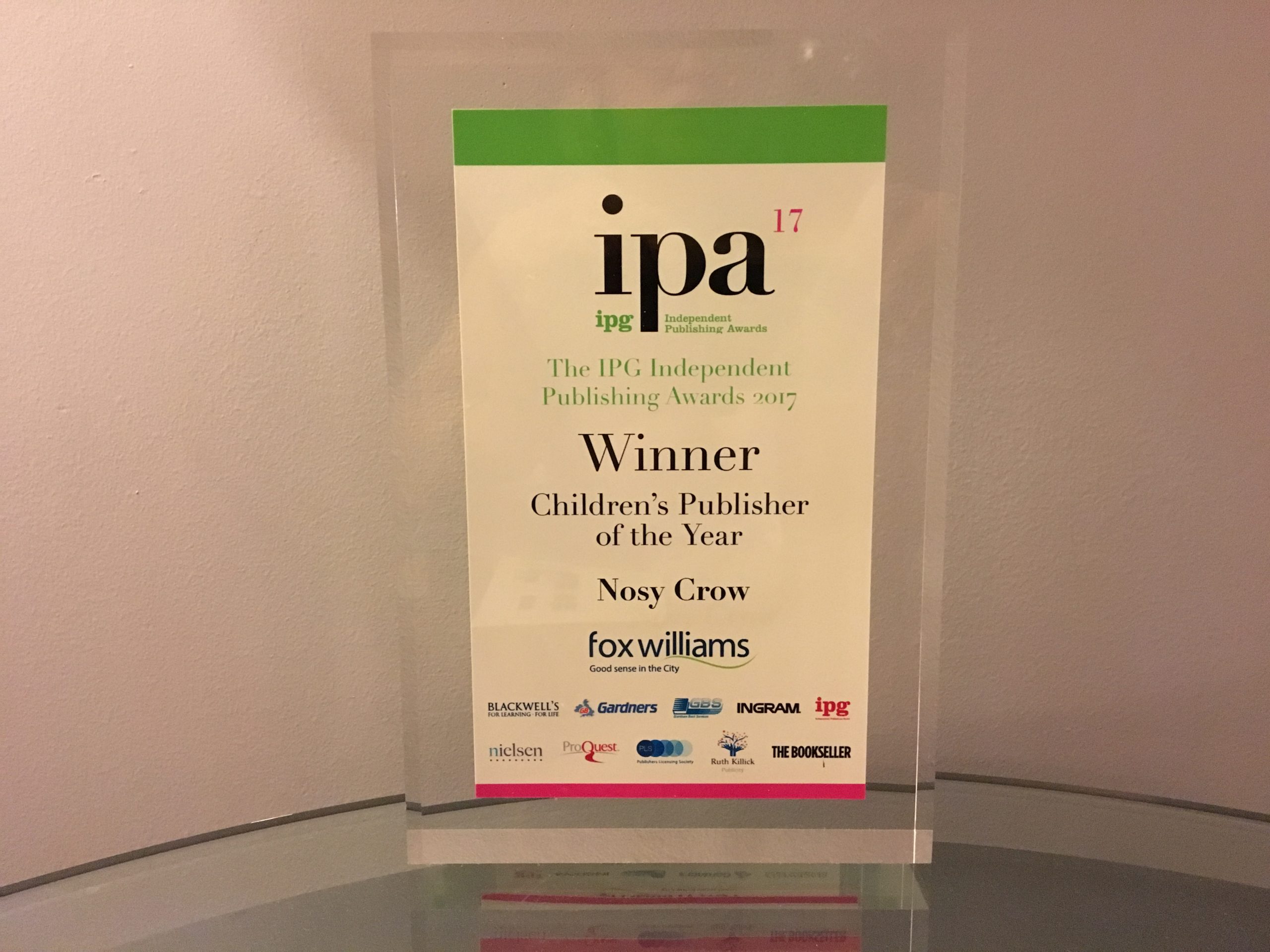 In May, Nosy Crow won the UK publishing industry’s biggest accolade for a children’s publisher when we were named Children’s Publisher of the Year at the British Book Awards (“the Nibbies”). I’ve been in publishing for 30 years, and hadn’t accepted one of these as a publisher before… and I didn’t get to do so last year either, because I was in Australia selling books at the Allen and Unwin conference. Adrian and Camilla accepted the prize, though, which was kind of perfect, actually. 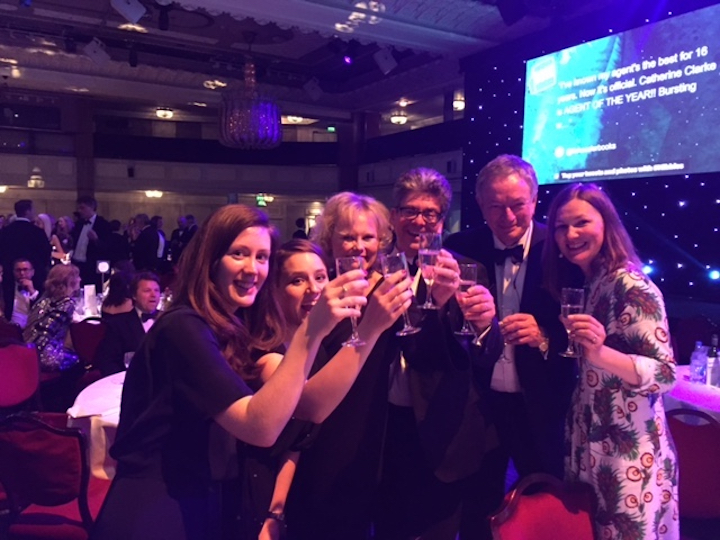 Also in May, we moved offices across Borough High Street from the west side to the east. We’re now in the shadow of Harper Collins, almost literally. We’re in a U-shaped courtyard building that, I’d guess, dates from the 1920s. We’re on the top floor, occupying the fat bottom of the U and the right-hand leg of it. It’s bright and open (we’re entirely open-plan) and we have room to breathe: while we were in the old office, our ability to grow was restricted by the fact that we couldn’t squish another person in. We had an office-warming party at the end of June. 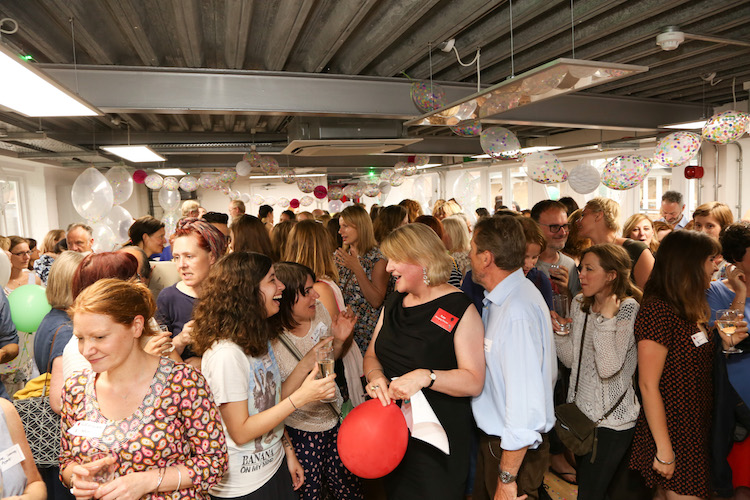 Our office-warming party in June 2017.

In July, There’s A Bear On My Chair, a picture book by Ross Collins, won the UKLA (United Kingdom Literacy Association) award for books for 3-6 year olds. In August, Where’s Mr Lion, a board book with felt flaps by Ingela P Arrhenius, published in January 2017, won the overall Sainsbury’s Children’s Book of the Year award. In April, on the same day, Nosy Crow books scooped two awards in continental Europe: the French translation of My Brother is a Superhero by David Solomons won the Prix Enfantaisie in Switzerland and the Dutch translation of Don’t Wake Up Tiger by Britta Teckentrup won the prestigious Het Prentenboek van het Jaar in The Netherlands. Books published by Nosy Crow were shortlisted for several national prizes, and won and were shortlisted for many regional awards. 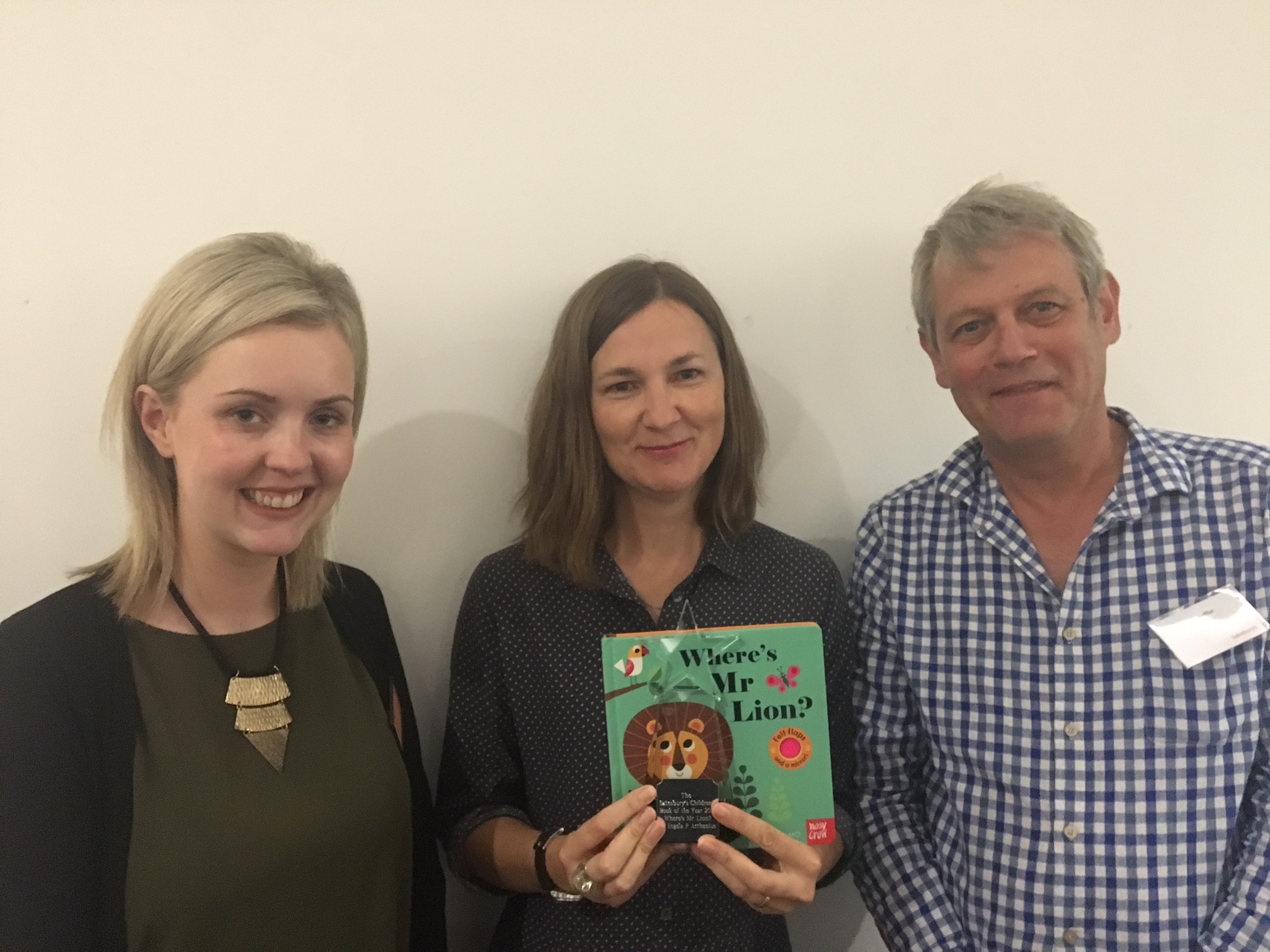 We continued to experiment. We branched out into audio, launching 12 fiction titles in audio form in December, read by, among others, Susan Calman and Juliet Stevenson. 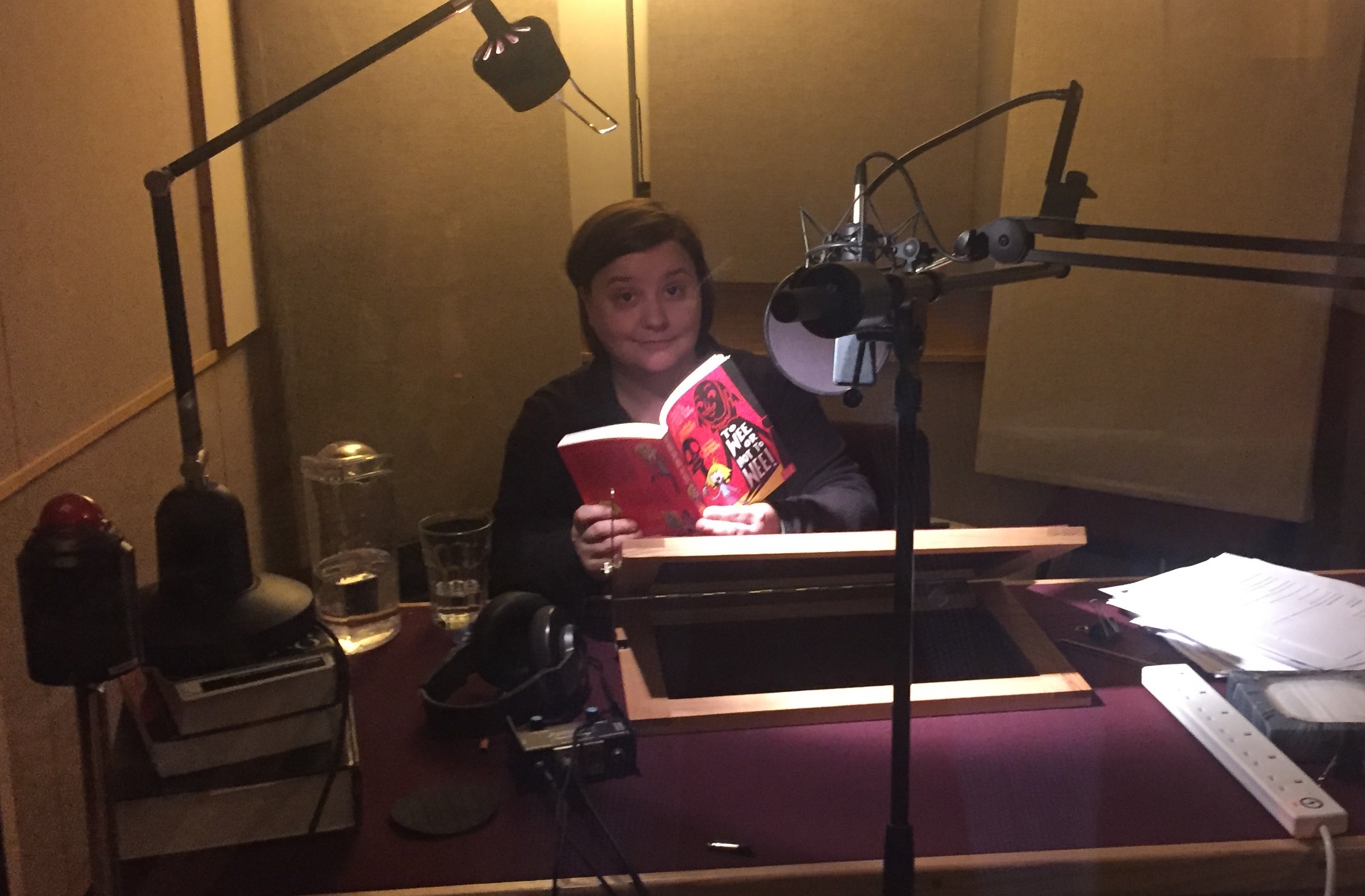 Susan Calman in the recording studio, reading the audiobook edition of To Wee or Not to Wee by Pamela Butchart

If you’re reading this, you’re on our website. In 2017, we had 243,673 unique users, and 929,790 page views. We have 7,295 Facebook likes, up 17% on last year, and, across @nosycrow, @nosycrowbooks and @nosycrowapps, we have 46,902 Twitter followers (so we’re not counting @nosycrowdog’s 277 followers), up 17% on last year. We have been much more active on YouTube recently: Nosy Crow videos on YouTube were viewed 459,100 times in 2017 – an increase of 47% on 2016. We have also been much more active on Instagram in the past six months, and have built our followers to 4,484. If you want to keep up-to-date with our news, do please have a look at what we post on the social media channel(s) of your choice, do please keep visiting the website, and/or do please sign up for our newsletter.

Thank you for reading this (if you got all the way to the end).  I hope it doesn’t seem too self-congratulatory, but it’s really great (as I sit in the office in the workaday chilly dark of January before I put my thermal gloves on and put the dog into the bike carrier to cycle off home and cook pasta with tomato sauce) to think back on the exciting bits of 2017. If you’re one of our authors or illustrators or an agent reading this, thank you for your support. If you’re one of the booksellers or librarians or publishers outside the UK who bought a book from us, thank you for your support. If you’re a mum or dad or carer or relative or friend of a child for whom you bought one of our books, thank you for your support. For us – well, for me at least – the seven years we’ve been publishing feel both like a lifetime and an instant. It remains as exciting to find, shape and publish books now as it did when we were just starting out.