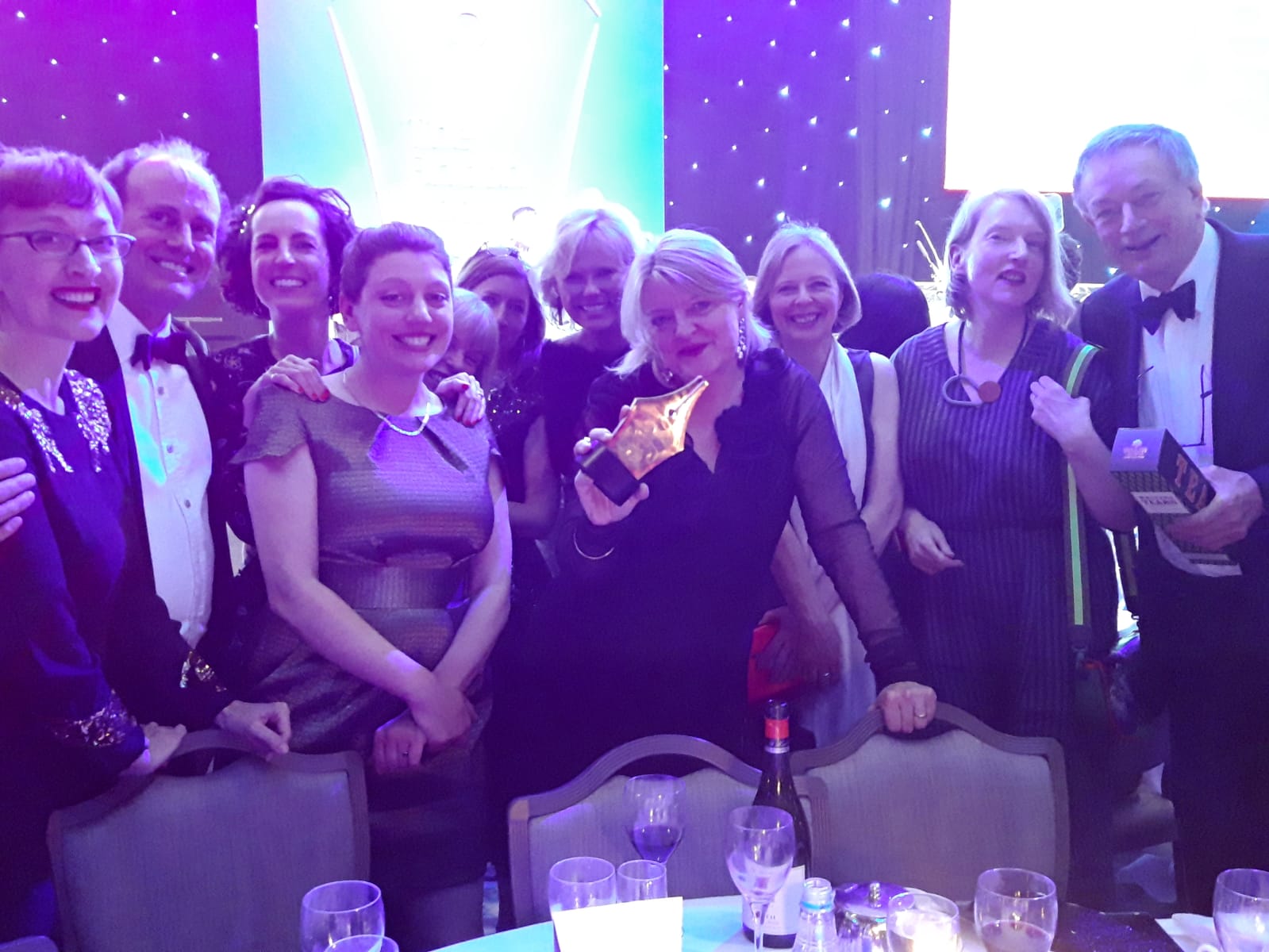 Nosy Crow named Children’s Publisher of the Year at the 2019 British Book Awards!

Yesterday evening, Nosy Crow won the Children’s Publisher of the Year award at The British Book Awards, also known as the Nibbies, run by The Bookseller and hosted by Lauren Laverne, who is really startlingly good at compering in every way – funny, clever, efficient, glamorous.

We are delighted and proud. It’s the second time we’ve won it in three years. And it was great to be able to share the occasion with Frann Preston-Gannon, the illustrator of I Am The Seed, which was shortlisted for Illustrated/Non-fiction Children’s Book of the Year, with her agent, Jodie Hodges, with Lou and Nia who both worked on I Am The Seed, with Katie Bond and Jo Empson from The National Trust, who were our publishing partners for I Am The Seed, with Rachel Airey from WHS, with Sean-The-Shareholder and his wife Meli and with Adrian and Catherine.

It’s a long evening, the awards night – 14 awards, dinner for 1,000 people (I know…), and then another 12 awards. Frankly, by the end of the first run of awards we were feeling, um, a tiny little bit glum: I Am The Seed, of which we are ridiculously proud and which won the Waterstones Gift of the Year award in November 2018, had not won its category, and we’d thought it was in with a decent chance. You Are Awesome had won it instead (congratulations and all that to Matthew Syed and Wren and Rook, of course…).

This is why the organisers said we’d won:

This is a second Children’s Publisher of the Year Award in three years for Nosy Crow – reward for one of the most spectacular growth stories in UK publishing and even more remarkable achievement internationally.

At home, Nosy Crow saw its TCM sales rocket 32.9%, making it the 12th biggest children’s publisher just eight years after launching. Success here has been built on a breadth of publishing and formats rather than a few big names, and publishing partnerships with the likes of John Lewis, the British Museum and the National Trust began to fly in 2018.

But if it is performing well in the UK, Nosy Crow is even stronger in global markets, which account for well over half of its turnover. Sales, rights and coedition business all rose dramatically, with Asia and the US especially hot, and it had struck deals in 43 countries in all by the end of 2018.

Not even a decision to close its app department, a founding element of the business, could break Nosy Crow’s stride. Instead, it doubled down on new author and illustrator development; on creative projects like I am the Seed That Grew the Tree, an ambitious £25 hardback poetry collection with the National Trust; and on its game-leading marketing, led by energetic and engaging social media work.

It has all helped to create a very distinctive brand that resonates with authors, agents, bookseller and partner publishers around the world. “Nosy Crow are inspirational publishers and it is a sheer joy to work with them… they’ve sparked a buzz of creativity across the industry,” said one retailer in support of its nomination.

“It’s extraordinary growth by anyone’s standards,” added the British Book Awards judges. “They’ve blazed their way into the market and you can be sure that there’s so much more to come from them.”

I have been working in publishing for 33 years and never picked up a Nibbie myself – never gone onto the stage, heart beating too fast, deaf to the music that I hear so clearly every time someone else goes up, anxious that I’ll fall off my unwonted heels, wondering if the darns in the sleeve of my lucky dress will show on the big screen on which my face is the size of Lichtenstein. This is not for want of trying: I attempted to accept a Nibbie when we hadn’t been awarded one in 2014. And when we won the Children’s Publisher of the Year Award in 2017, I was in Sydney at the Allen and Unwin sales conference (they distribute our books in Australia and New Zealand) and I missed all the fun.

It is, I have to say, a GREAT feeling to get that unexpectedly heavy, nib-shaped prize in your hands… tempered last night only by my own sense of unpreparedness. You have a tiny amount of time to give a little acceptance speech. Before the event, you feel – well, I feel – that it would be an act of terrible hubris to write an acceptance speech. But as coffee is poured and the second half of the awards get underway you start scribbling on your place card the people you should thank, because, although I should probably have something terribly profound and important and industry relevant to say, the key thing is really just to say thank you, I reckon. And I couldn’t thank everyone who contributed to Nosy Crow’s success in 2018 – I’d have been up there for hours. As it was, I failed to thank The Bookseller for running the Nibbies and Tesco for sponsoring the Children’s Publisher of the Year Awards (sorry to you both if you are reading this).

This is what I said:

So thanks again to the judges, to our authors and illustrators, to all of our customers in the UK and beyond, to all of the growing band of Crows, to our shareholders, and to the adults who buy our books to share them with the children who are the future of our industry, and whose lives are immeasurably enhanced by our own books, and those made by the wide and increasingly diverse children’s publishing community.

We had a jolly, but not, you know, crazily bacchanalian time… because this morning we were all in the office working on the next books, the new books. And it was a pretty full-on day, which is why I am only managing to write this blog post now.

We did all break for Krispy Kremes, though, in the afternoon.

Publishing, and particularly children’s independent publishing, is a pretty great job to have every day. But last night and today it has felt like the best job in the world.

We Won an Island is now available as an audiobook