Ten years ago this month, in January 2011, Nosy Crow published its first book – one of 23 published in that first year of publishing.

We’d actually started with a financial plan and a lot of hope the previous February. Looking back at that plan, it’s interesting to think how much of what we planned and hoped for came true, and is still true. What has stayed the same? What has changed?

The publishing idea has stayed the same… but also been added to. In the plan, we said we would “focus on the publication of books illustrated in colour (picture books and board books) and for younger children (0 to 7), but will also publish novels, but only those for which we can acquire a wide portfolio of rights.” We have, of course, held true to our sense of ourselves as a children’s publisher, and we publish what we’d describe as child-focussed, parent-friendly books for children aged 0-12. In addition to the categories we said we’d publish, we have added non-fiction, mainly illustrated, after we became the exclusive children’s publishing partners of the National Trust in 2014, and then the British Museum in 2015. Some of our earliest picture books – books like the Pip and Posy series – and board books – books like the Bizzy Bear series – remain growing series for us and have sold millions of copies. While we launch new writing and illustration talent every single year – among last year’s debuts was Waterstones’ January Children’s Book of the Month, The Girl Who Stole an Elephant by Nizrana Farook – our backlist, and those authors and illustrators who work with us regularly, are our backbone. Last year, our then nine year-old backlist represented 70% of our sales.

Those millions of copies of Pip and Posy and Bizzy Bear, like so many of our other titles, have been sold throughout the world. In the plan we said we “will sell foreign-language and American rights and co-editions to overseas publishers”. International rights and co-edition selling has been a key element of Nosy Crow’s success through the years. I started my publishing career in rights selling, and the love of crafting books that work for as wide a range of markets as possible and travelling to sell those books at book fairs and on sales trips, while learning about markets and cultures on the way, is one of my favourite things, so an international outlook was always going to be part of Nosy Crow’s culture. We established, early on, strong relationships with three publishers in particular – Candlewick Press, who continue to publish many of our board and picture books in the US; Gallimard Jeunesse in France; and Gottmer in the Netherlands. Their support as we have grown has been invaluable, but we now sell to other publishers in the US, France and the Netherlands… and, now, have sold rights in 43 languages. Like Candlewick, Gallimard and Gottmer, the publishers we sell to produce books in their own languages (including US English), but we also sell our own British English-language editions throughout the world. Our first partnership in this area was with Allen and Unwin, who continue to sell our books in Australia and New Zealand. Initially, we sold our export copies to countries other than Australia and New Zealand through agents, but a few years ago, we brought export sales in-house, under our head of sales and marketing, Catherine Stokes, who has grown this part of our business exponentially… and this blog post is written on the day that our new export manager, Damon Greeney, starts working for Nosy Crow. Almost three quarters of Nosy Crow’s business comes from outside the UK.

Initially, our sales within the UK were managed by Bounce Sales and Marketing, and we are so grateful to them for all they did to build our business. But with growth comes a desire for independence, and over the years, we have increasingly taken responsibility for selling to UK bookshops and wholesalers in-house, culminating, in July of last year, with the launch of our own field sales force. To launch a UK sales force in the middle of a pandemic, just a fortnight after the first lockdown ended was… optimistic. But the response we’ve had from independent bookshops has been extraordinarily positive and validating. While we, along with all children’s publishers, have seen a significant growth in online selling, we know that it’s much easier for children, and their parents and teachers, to discover new books in a bricks-and-mortar bookshop than it is online, where everything is available, but where sales tend to concentrate around known names and loved classics. Nosy Crow is now the eleventh biggest publisher of children’s books in the UK, measured by Nielsen’s figures, which track book sales to consumers.

In the initial plan, we said that if we were really successful, we might achieve £10 million of annual sales after ten years. This proved to be an underestimate. Last year, our sales were £22 million. Of course, our sales aren’t the only thing that have grown fast. We will publish 119 books this year, compared with the 23 we published in the first year, and we start the year with 54 members of staff – 50 more than the four people gathered round the table when we started. 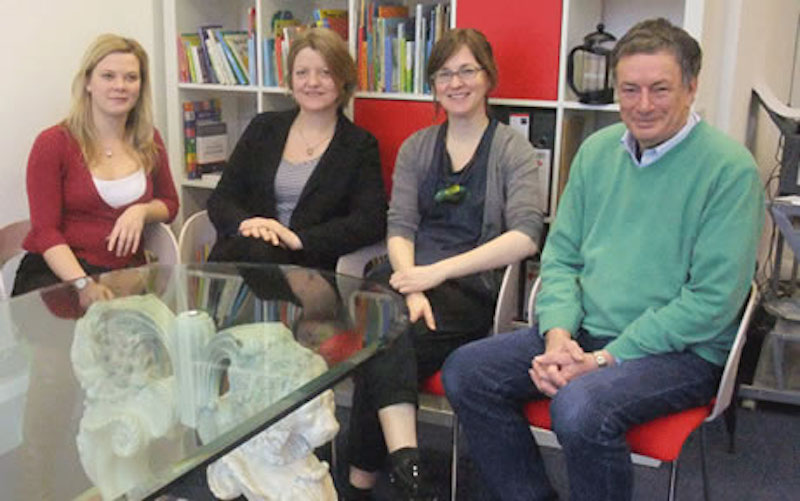 Imogen Blundell, now head of operations, with the founders, Kate, Camilla and Adrian at the very start of Nosy Crow.

The initial plan said that we would publish digital books in the form of apps. When we made this commitment, the iPad had yet to be launched (it was launched in May 2011), but we felt that it was inevitable that children would be spending more time with screens and we wanted some of that time to be reading time. We are proud to have published the brilliant collection of prize-winning, cutting edge, interactive apps that we made. But each app took our in-house app team around nine months to produce, and, as the years went by, it became clear that consumers weren’t willing to pay enough – or in many cases, at all – for digital products for young children. And so we closed the business. But the experience left a legacy: the experience of creating audio for the apps made us consider other audio products, and Stories Aloud was born: every Nosy Crow paperback picture book and some of our board books come with a QR code that links to a free professionally recorded reading of the book, complete with music and sound effects. It’s been used millions of times, and it’s proved a brilliant form of digital marketing.

A commitment to digital marketing was a hallmark of Nosy Crow from the beginning: the first version of our website predated our publishing by almost a year. It’s something we’ve continued to invest in: we’re currently recruiting a digital content designer to join the team. We’ve won prizes for our digital marketing, which has been a hugely important contributor to developing brand awareness. And brand awareness is something we feel we’ve built particularly well: we so often hear booksellers and parents talking positively not just about individual books, or series, or authors, or illustrators that we publish, but of Nosy Crow books in general. Building a brand is hard. It’s not just about sticking a logo on a front cover (though we did that early and did that consistently). It’s about having integrity, and clarity about the edges of your publishing, and not acquiring things that don’t fit the company vision and culture… however tempting!

The plan was agreed by the three founding partners – me, Adrian Soar and Camilla Reid – to raise the additional money that we calculated that we needed to start the company. It worked. Axel Scheffler and Sean Williams became shareholders and non-executive directors and the company is still owned by the same five people who were there at the beginning. It’s an achievement we are very proud of: it means that the company has generated sufficient cash and profit not to require additional investors. We have retained our independence, and with it, we think, our distinctive culture and way of doing things, answering only to one another and individuals who have been with us for our whole journey.

This all looks great, doesn’t it? It looks as if it’s been pretty much plain sailing. But of course, it hasn’t been. There have been failures and mistakes. There has been anxiety and sadness and disagreements. Individual books sometimes haven’t done as well as we’d hoped they’d do. Books we’d hoped we might buy have been sold to other publishers. Books that are key to our budget have had to be moved because the author or illustrator hasn’t managed to meet deadlines. Misprints and production errors of one kind or another, sometimes our fault, sometimes that of the printer, have occasionally and painfully required the expensive, wasteful and discouraging pulping of whole runs. Hugely valued members of staff have left us voluntarily or, most distressingly in the case of Ola Gotkowska, because of illness, or, in the case of the apps team (and only in the case of the apps team), redundancy. We’ve come terrifyingly close, more than once, to running out of cash. And, of course, this is a birthday, not an obituary: Nosy Crow is not done. Publishing is a long game. That’s true about the journey from the inception of a book to its publication, which often takes too many months and years for an impatient person like me to bear easily. But building a team, building a list, building a brand, building a publishing house… well, that’s a journey that takes decades. And we’ve only had one. To everyone who’s accompanied us along the way so far, thank you, and stick with us: it’s an exciting road ahead!