Not Your Typical Kids’ Book: a guest post by Jason Rohan

This month we’re absolutely delighted to have published S.T.E.A.L.T.H.: Access Denied – the first in an explosive new action-adventure middle grade series. And today we’re very excited to be sharing a piece from author Jason Rohan on his inspiration behind the book.

Hi! Well, what can I say, other than S.T.E.A.L.T.H.: Access Denied isn’t your typical kids’ book. With car chases, explosions, gadgets, secret organisations and breathless action, it’s more of a white-knuckle movie rollercoaster than a novel and that’s entirely deliberate.

I come from a comic book background so I tend to think in pictures and dialogue, which is also how cinema works. A screenplay is written with one page equalling one minute on screen and in S.T.E.A.L.T.H.: Access Denied, chapters are time-stamped and intended to read roughly in real-time, so it works the same way, like the TV show 24. In fact, I seem to get a lot of comparisons to things like James Bond, Jason Bourne, Alex Rider, CHERUB, Mission: Impossible and Transformers, but no-one has identified the key inspiration yet, and that is… Thunderbirds.

For, ahem, people of a certain age, Thunderbirds holds a special place in our hearts, back when there were only three channels on TV and Saturday morning at 11:00 was time to gather round the box for Jeff Tracy’s famous countdown. Sure, even as a child, the puppets were hokey, but the action set pieces were state-of-the-art and fired young imaginations like mine, and even inspired a real-life International Rescue Corps.

A live-action film version came out in 2004 and, for me, it was a crushing disappointment. (Rotten Tomatoes has it with a 19% approval rating, so I’m not alone in my view.) That, and rewatching some of the episodes with my own children, started me thinking about how the concept could be brought up to date but with middle graders as the main characters. I couldn’t see five kids each operating separate vehicles as a viable idea but if it were one vehicle capable of performing multiple roles, then that could work… And, if we had a pilot, navigator and engineer, the staple roles for robot anime… That’s how I came up with the main characters of Arun, Donna and Sam, three ordinary kids who find themselves in an extraordinary adventure.

I’ve noticed that adult thriller writers, like Frederick Forsyth and Tom Clancy, use a lot of real-life detail to ground their stories in the real world and this is important before introducing a fantasy element. It’s almost like the more rooted you are in reality to begin with, the bigger the chance you can take later with upending that, as per The Matrix movies, and a major part of that grounding was making the main characters be normal kids, recognisable and relatable. Arun is the quiet, thoughtful one, naturally reserved but with a sharp intellect and ability to think on his feet. Sam, his best friend, is more of a geek who takes refuge in gaming and computing. Donna, I belatedly realised, is the true protagonist of the story in that she drives the story forward. It is her curiosity which initiates the kids investigating a kidnapping, and she steps up time and again to bail the trio out of trouble. One of the joys in creating S.T.E.A.L.T.H. was seeing the three characters come together as a team.

I don’t set out to write ‘message’ books, but certainly there are themes of not underestimating people or making ill-conceived presumptions and that goes across the board. Just as the adults constantly dismiss the kids, so too Sam puts his foot in it with Donna, and Arun grows to respect and admire her.

I’ve worked as a teacher so I’m always keen that a reader will learn something, however unwittingly, when they read one of my books. As well as lots of STEM-related snippets, I hope that readers will take with them the power of friendship, independence and resilience. Now, more than ever, we need to co-operate to overcome the huge challenges ahead. If nothing else, S.T.E.A.L.T.H.: Access Denied shows what you can do if you’re determined enough and refuse to give up, however great the odds. Sometimes, just doing the right thing is heroic in itself.

Now fasten your seat belt, hold on tight and enjoy the ride!

Thank you, Jason! You can order a copy of S.T.E.A.L.T.H.: Access Denied from Waterstones here, Bookshop.org here, or Amazon here. 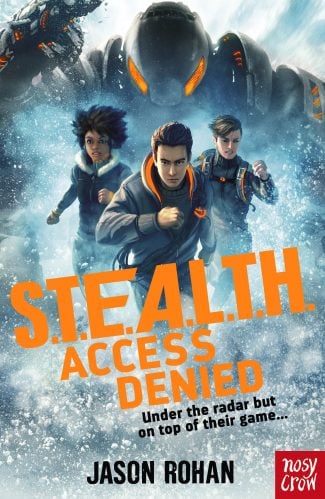