This month we’re absolutely delighted to have published Mouse Heart – an atmospheric thriller, full of daring stunts and sinister villains. And today we’re very excited to be sharing a guest post from Fleur!

I wasn’t a theatre child. I certainly wasn’t desperate to act. It came by accident when I was 18.

I’d gone through clearing to do an English degree and it was only when I arrived that I discovered I had to take three subjects in the first year. I didn’t have the qualifications for the sciences, or it turns out, anything else. After an awful day of trekking from one department to the next and being turned away, the tutors at History of Art and Drama both shrugged and said I could join their courses.

History of Art was fine, I’d been dragged round galleries from an early age, but Drama? That meant acting, didn’t it? After trust games, farty yoga and howling like wolves (all fine) I found that we were doing a module called “History of Theatre”.  Instead of a lecture theatre, we were taught in her eccentric house by an elderly white witch.  She saw it as her mission to entrance us with recitations of early English plays, dressed in appropriate garb, dancing over sticks where the proscenium arch ought to be.  It was bizarre and wonderful and I became fascinated by the idea of all these lost theatres.

Then there were the performances themselves. Somehow, I found a backstage role from day one, but I watched enthralled as my fellow students stepped into the lights and were, for a moment transformed. All the tawdry clipped together costumes, the clunky makeup, the cardboard shoes became real and wonderful and I fell in love with that magic.

Scroll on a couple of decades, and waiting for a ferry, I met a dutchman who worked on the building of the Globe theatre, and who told me that he had placed coins under the huge pillars on the front of the stage, and that sometimes he was the last to leave and would sit on the stage and imagine a long ago audience.

Another decade and my niece and her family were living near the Globe and I passed regularly, eyeing the flags on the roof and wondering about the other theatre, the Swan, that was there in Southwark and was destroyed by fire. Somewhere under one of those huge modern office buildings are the remains, and they began to scratch at me as if there was a story of a theatre by a river, but I didn’t know what it was.

As the first lockdown eased, I looked for a place for my theatre. Not London, it was too well documented, and this wasn’t going to be real history.  Also, I needed a place I could visit. We couldn’t travel far, but we could just about make Bristol without needing a wee, which was a serious consideration. My daughter, 18 at the time, was desperate to leave the house so we drove to take a walk around the deserted city.  We wandered the harbour side, the Backs, Bristol Bridge. Up to St Mary’s Redcliffe and down to St Nicholas Market. It was eerily quiet.  It felt as if we might at any moment turn the corner to see the tall ships, still there, bobbing on the oily water.

At home again, I read about the harbour. Every sort of ship, all wooden, but all transporting different things. Sugar, cotton, timber, wool, wines, and people. It must have been a toxic mix of everything unruled and unruly. Even Blackbeard had started here.  I pored over maps of the city. I read about the awful gaol at Newgate, the gibbet on St Michael’s Hill, and my incoherent notes began to take shape, as did my protagonist.

Her name came first, Mouse, and she appeared in my mind dancing with a sword in the sunlight on the stage. She was small and strong. Her beloved family was a patchwork of theatrical figures, actors with better pasts than futures, jealous children she had grown up alongside.  She had skills and would be taught by people who lived by deception and enchantment. But in spite of that, she would always want to know the truth, even if it led her to terrifying places. And then she would be afraid, but brave.  The thing I wanted for her most though, was that she was real. A modern protagonist, in an almost historical setting, because I thought that was the best way to make a modern child connect with her.

In the end, I wanted the reader to care about Mouse as much as I do.

Thank you, Fleur! You can order a copy of Mouse Heart  from Waterstones here, Bookshop.org here, or Amazon here. 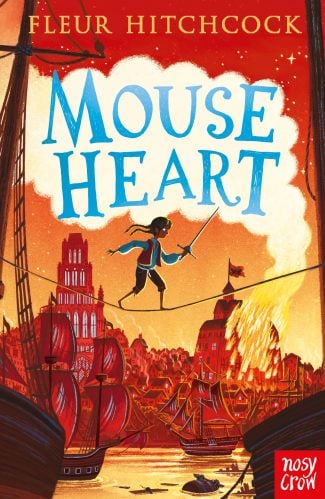 Read an exclusive extract from Always, Clementine by Carlie Sorosiak