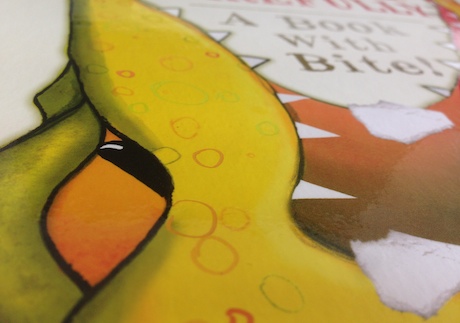 Open Very Carefully, the Waterstones Children’s Book Prize-winning picture book illustrated by Nicola O’Byrne with words by Nick Bromley, has been shortlisted for Oscar’s First Book Prize, a new book prize established by the Evening Standard in memory of the son of City editor James Ashton, who died suddenly at the age of three.

The judges described Open Very Carefully as “a book that delights the young reader by breaking all the rules, from radically changing the story’s direction to literally tearing holes in the pages.” Rupert Thomas described the book as “interactive, original and fun for children and parents. Beautifully produced.” Viveka Alvestrand, Oscar’s mother, said that, “At two-and-a-half Alice is a little too young to understand the idea of a crocodile eating words and gobbling up whole sentences but she loved the participatory idea of the book — rocking it to make the crocodile sleepy and pretend scribbling on it as it snored away.”

Weasels, the debut picture book by Elys Dolan, was also longlisted for the prize. You can read the full shortlist, along with all of the judges’ comments, here.

Buy the book from Waterstones.