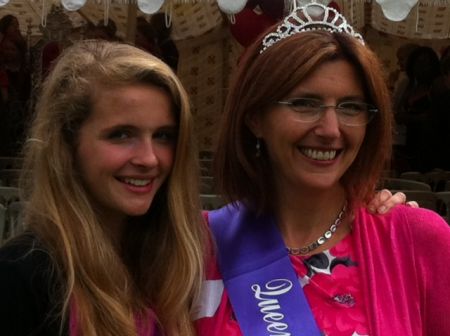 A few weeks ago I attended a corporate strategy session and I was asked to bring an object which special to me, and share the story with the group. It took a matter of seconds to decide that I wanted to take my Queen of Teen tiara. It’s completely over-the-top, glittery and, frankly, just a little bit too much for the office, but it was exactly what I needed.

Queen of Teen is a UK competition for authors writing for the teen market. Anyone can be nominated, and then the authors with the most nominations go through to the grand final. Voting then starts in earnest, with authors offering giveaways, visits, their first-born children – the usual stuff – to get the most votes. I was lucky enough to be included in the final the last time it was run, in 2012.

On the day of the ceremony the ten finalists were invited to a fancy reception where we met our ‘super-fans’ – a reader who had nominated us and who was randomly selected from the pile – and sized up the competition. It was lovely to get to meet some other writers of teenage fiction, and I had to try hard to remember not to get all fangirl-ish myself.

After lunch it was into the fleet of pink stretch limos and on to the grounds of the country pile where The Book People have their HQ. In the garden was a massive marquee, lined in pink (what else?), and stuffed with pink cupcakes, pink drinks and a completely over-the-top throne. Each one of us was introduced by our nominator, who gave us our tiaras, and then we gave a short speech to the crowds of local schoolchildren. Finally it was time for the results to be announced. The winner (as we all expected) was Maureen Johnson, who accepted the crown and promised to be a just and fair monarch (despite being an American).

We then got to meet all the kids, sign lots of books, and chat for hours about books and writing. Later we were all invited to an ‘after’ party at the local Waterstones store, where there was more signing and more cake (of course).

It was a splendidly surreal experience, quite unlike anything I had ever done before, and I would love to do it again.

But that isn’t the reason that the tiara means so much to me. It’s special because all the nominations and votes were cast by the readers – teens who had read my books and felt strongly enough about them to go on line and say so. Some read all the time and devour a book a week, others are less prolific. One wrote to me to say that Small Blue Thing was the first ‘proper’ book that she had ever read, but thanks to that she was now reading all the time and her grades at school had improved. My tiara is a reminder of her, and of the power of a book to change lives.

Nominations for Queen of Teen 2014 have just opened, and my first-born is up for grabs again. It’s time to wrestle Maureen off that throne!

Small Blue Thing fans can nominate Sue to be the 2014 Queen of Teen here. If you’re new to the trilogy, you can read chapter one of the first book in the series below, or order it online here.

Weird, wacky and wonderful: a reader review of Cowgirl