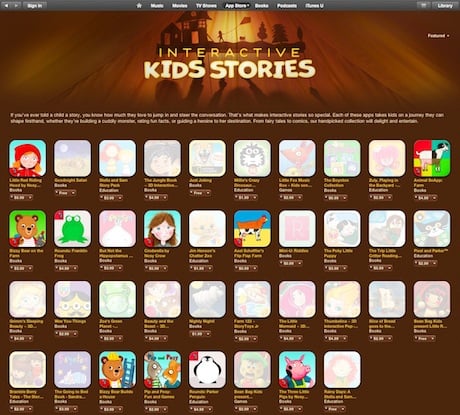 Nosy Crow apps in the Interactive Kids Stories section of the App Store.

The App Store can be a fairly baffling place to navigate – not just for consumers, but also for developers like us, too. The best description I’ve heard is that it’s like “the world’s biggest shop, with the world’s smallest shop window”, which gets to the heart of the challenge rather neatly: there is a vast sea of content being squashed into a bathtub. How can any one app claim enough space and attention?

As any developer will tell you, the key to an app’s success is its visibility on the Store: its position in the charts, the promotional slots it receives from Apple (which can’t be bought – only earned on merit), and – most prized of all – a place on the front page. We’ve always been proud of how our apps have fared on the Store (and we’re incredibly grateful for the support they get from Apple), though, like any proud parent, we always want more for them.

I came across this interesting post on the VentureBeat website last week, which speculated on how the App Store’s ranking algorithm works. As the author notes, the exact formula isn’t public information, but an educated guess is that it weighs several discrete criteria: the number of downloads an app has received in the short and medium term, sales, engagement (that is, the number of times an app is actually used), and lastly, reviews and ratings.

And this is all a roundabout way of saying that reviews are incredibly important to us! In a place as crowded as the App Store, we are truly dependent on people who like our apps spreading the word. So if you’ve enjoyed a Nosy Crow app recently, we’d be incredibly grateful if you’d consider leaving a review and rating on the Store – it makes all the difference.

You can download our most recent app, Jack and the Beanstalk, on the App Store here, and watch the trailer below:

And don’t forget, our first ever app, The Three Little Pigs, is free all this week to celebrate its third birthday – you can download it here.

Win a Baby Aliens Got My Teacher notebook!