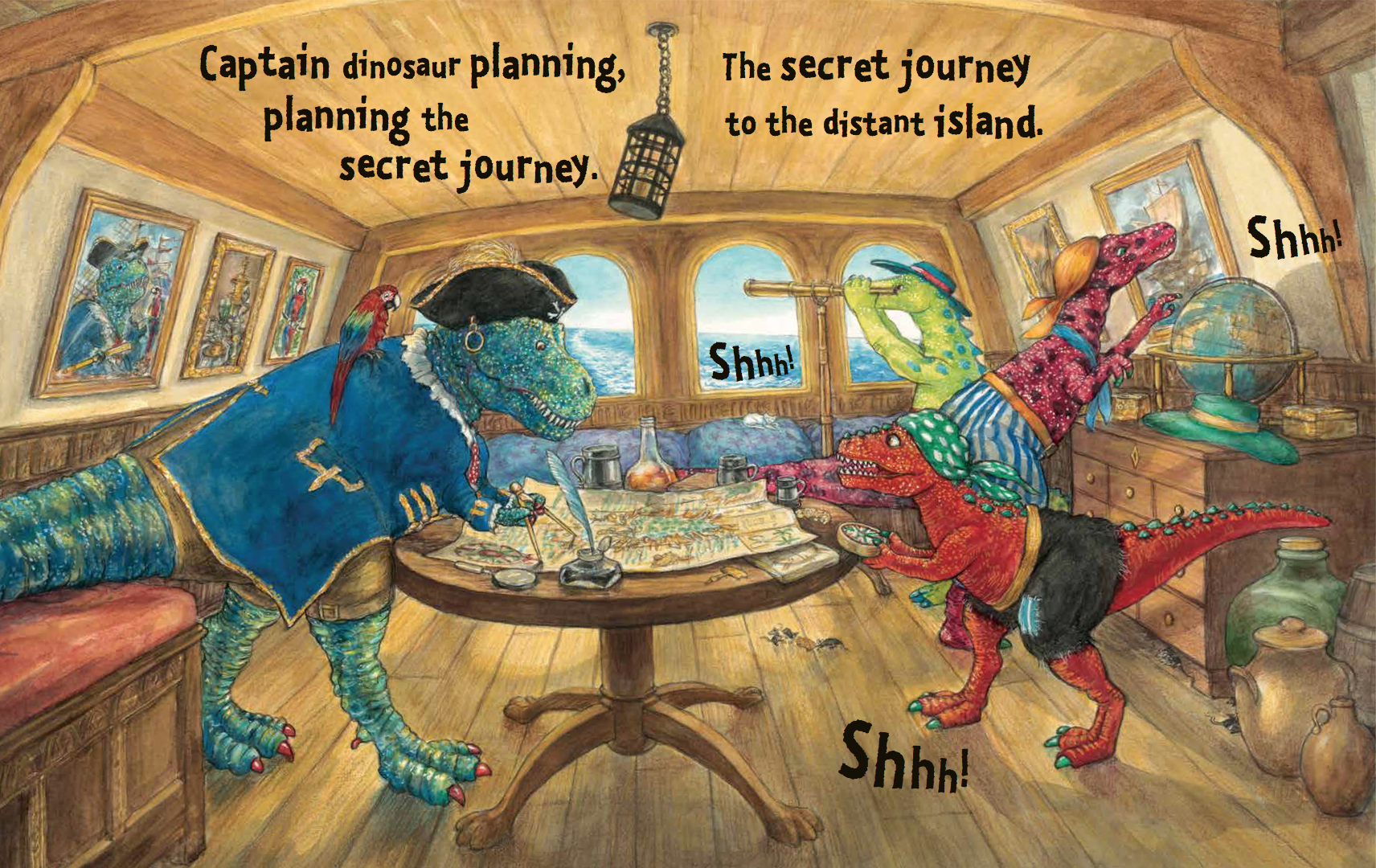 Today’s post is by Penny Dale, author-illustrator of Dinosaur Pirates, the latest fantastic book in the Dinosaur picture book series.

A couple of weeks ago I posted this illustration from Dinosaur Pirates in reply to a jolly comment on Twitter.

Later, in a reply to another comment about the tweet, I mentioned I’d particularly enjoyed the research and detailing in this particular illustration, and that started me thinking… I know details can be a great way of adding depth, description and atmosphere to simple text, and children do enjoy peering at, and spotting things in pictures. But also, if an adult is reading to a child, it’s good to have detail that can be interpreted, or ‘read’ by them too, and passed on to the child in, “What d’you think that is?” type exchanges.

I thought it could be fun to list some of the possibly less obvious elements in this spread from Dinosaur Pirates.

So in no particular order:

1 The map: It’s based on early map graphics and appears a couple of times in story. This is a lesson to beware of in illustration. If you draw something complicated, and it appears more than once in the book watch out, because it’s much harder to repeat, especially from a different viewpoint. I fell into this trap here, and paid the price, having to wrestle with redrawing it a couple more times in the book!

2 Captain and parrot: The parrot is on the T rex’s shoulder, but also features in two paintings on the wall. One conclusion would be that the captain is very fond of his parrot! The Captain also has a picture of himself on display. Discuss.

3 The paintings: During preparation time on the book I happened to visit Amsterdam and was surprised to find taking non-flash photos was allowed in the Rijksmuseum. So thanks to that, the cabin has some Dutch master inspired paintings on the walls.

4 Captain’s earring: It is attached to his hat as the T rex has no earlobes?!

5 Tilt and curve: The whole scene is tipped out of level to suggest the swell of sea, also the lantern is swinging. The wake of the sea out of the window is curved to imply the ship is turning.

6 On the floor: There are rats, not mice, eating other half of ships biscuit dropped from the table. I had an exchange in a conversation across the virtual studio of Twitter, with Elys Dolan about the difference between mice and rats when drawing them very small. Coincidentally we had both been drawing rat studies on the same day.

And as far as the feel of the whole scene… thinking about it reminded me of this photo. It shows me, and my brother playing on a replica of the Golden Hinde.

I based the dinosaur’s pirate galleon on a model of this ship. This almost life size  replica was built for a TV series about Frances Drake made in the 1960’s (I know, look at my dress). It wasn’t strictly speaking a pirate ship, but to us it was, and seemed thrillingly real! I particularly remember being fascinated by the captain’s cabin, the sloping, curved walls, the furniture, the pictures and equipment, maps and telescopes… In fact all the details!

Thank you, Penny! Dinosaur Pirates is out now – you can take a look inside the book below, and buy it online here.

If you’d like to stay up to date with all of our book news, you can sign up to our books newsletter at this page, or with the form below: