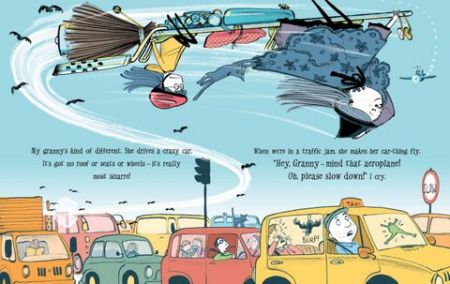 The success of Julia Donaldson’s texts are a real proof of the power of rhyme as a story-telling medium.

Many of my own children’s very favourite picture books and board books – We’re Going on a Bear Hunt, Goodnight Moon, Duck in the Truck, The Cat in the Hat, Green Eggs and Ham, Hairy Maclary from Donaldson’s Dairy, Peepo – rhymed and scanned.

My children learned these texts fast, and could recite them by heart. Even new texts were predictable – when an adult reader paused before a rhyming word, they were able to supply that word, or at least guess at it.

When I am looking at rhyming texts, I am really looking for three things:

1. A consistent, clear rhyme scheme with words that really rhyme… and, ideally, rhyme in many English accents. Many texts that I receive rhyme only if you speak RP English (or at least the accents of Southern England), so I always run the text through my head in a Scottish accent (I am from Edinburgh) as well as an attempt at a US accent and an Australian accent.

2. Consistent, clear scansion. This is really key, and a point on which so many texts I see fall down. I tend to use slash-and-breve notation when I’m looking at a rhyming text, and will think to myself, for example, “OK, so this is trochaic tetrameter” (like Wadsworth Longfellow’s Hiawatha), but you don’t, to write a good rhythmic text, have to know your spondee from your iamb. Julia Donaldson said (somewhere – I can’t find it now) that she gives her texts-in-progress to her husband, and asks him to read them aloud. If he hesitates over where to put the stress, then she revisits the line. I think this is a great discipline.

3. And finally, a real story. We’re a UK-based company, and our production of books printed in full-colour depends on our selling rights to other countries. So rhyming, rhythmic texts have to be translated. If, essentially, all that they are IS their rhyme and rhythm, then they are much less likely to be of interest to foreign-language publishers. Most publishers do try to translate rhyming, rhythmic texts into rhythmic rhyme in their own languages. Here are the first four lines of “(new-window)The Gruffalo:http://gruffalo.com/ in English:

A mouse took a stroll through the deep dark wood.
A fox saw the mouse and the mouse looked good.
“Where are you going to, little brown mouse?
Come and have lunch in my underground house.”

And here they are in German:

If you speak German, you’ll see that the sense is the same but the word-for-word translation has been sacrificed to the exigencies of the rhythm and rhyme.

But publishers don’t always translate rhyming texts into rhyme, and, even if they do, it’s going to be harder work for them to find the right translator, and something will inevitably be lost. Many are therefore hesitant to take on a rhyming text. So, as a publisher, you have to consider whether there is enough to the story for it to survive if it were translated into prose. I think that most children want a picture book to tell a story, and I find that that’s what most of our translation rights publishers are looking for too. In fact story can be the most important thing in a picture book – more important than words: The Journey by Aaron Becker is an example of a picture book with a story in it that relies on no words at all.

And I am not saying that there isn’t room for highly-wrought, lyrical language in picture books: I was also particularly proud, when I was at Scholastic, to publish Jeanette Winterson’s The Lion, The Unicorn, and Me. Here’s her description of Bethlehem:

“Oh but it was a musty, rusty, fusty, pudding of a town turned out for a show, its people cussed and blustering, all buy and sell and money, taking their chance while the going was good before the goods got going again. Taxes, and everyone here to pay up, and everyone had to be put up, for this one night, so that even the mice were renting their mouse-holes, and there were travellers hanging out of birds’ nests, their beards full of twigs and old worms, and the ant hills were full up, and the bee hives had three families apiece, and there was a man tapping on the frozen lake asking the fish to let him in.”

This is prose, but it’s very close to poetry. It just doesn’t have a formal rhyme scheme or scansion, which makes the prospect of translating it less challenging.

At Nosy Crow, we’ve found books that, from our perspective, meet the three criteria above. One we’ve published already is Tracey Corderoy’s Hubble Bubble, Granny Trouble, illustrated by Joe Berger

The first four lines of this story read:

“My granny’s kind of different…
She wears such funny hats.
She’s got a huge menagerie
of cats and frogs and bats!”

The image at the top of this blog is a spread from the book.

Tracey’s working on two follow-ups to this story (which sold remarkably well), and has also written a rhyming text that will be illustrated by Steven Lenton in 2013, called Shifty McGifty and Slippery Sam.

Another author whose ability to create really compelling rhyming and rhythmic text attracted us to her is Caryl Hart, whose The Princess and the Peas illustrated by Sarah Warburton will be published later this year:

Here are the first four lines of this book:

“Lily-Rose May was a sweet little girlie.
Her eyes were bright blue and her hair was so curly.
She lived with her dad in a beautiful wood.
She was kind and polite and was usually good.”

Of course there are exceptions (and, who knows, we may even publish them!), but generally, for Nosy Crow, rhyme and rhythm need to be the engine that drives a really good plot.