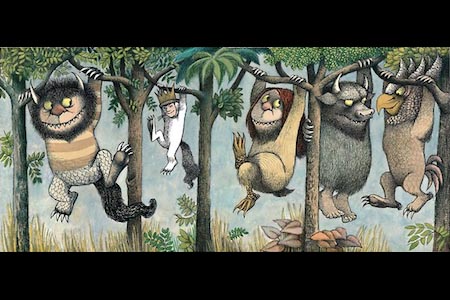 Maurice Sendak, one of the most brilliant artists and children’s illustrators of the last century, has died at the age of 83. I shan’t win any prizes for originality by saying that one of my all-time favourite picture books is Where The Wild Things Are, but it is. There can’t be many people whose work is an inspiration to so many – writers, artists, publishers (and, most importantly, children) – as Sendak’s.

There’ll no doubt be no shortage of incredible Sendak stories circulating over the next few days (he was certainly known for speaking his mind), but here are two of my favourites.

In an interview with Terry Gross of NPR, Sendak was asked to share some of his favourite comments from readers over the years. He picked out one in particular (via Letters of Note):

“Oh, there’s so many. Can I give you just one that I really like? It was from a little boy. He sent me a charming card with a little drawing. I loved it. I answer all my children’s letters – sometimes very hastily – but this one I lingered over. I sent him a postcard and I drew a picture of a Wild Thing on it. I wrote, “Dear Jim, I loved your card.” Then I got a letter back from his mother and she said, “Jim loved your card so much he ate it.” That to me was one of the highest compliments I’ve ever received. He didn’t care that it was an original drawing or anything. He saw it, he loved it, he ate it.”

And in this interview, Sendak talks about some of the inspiration behind Where The Wild Things Are, and a fight he had with his publisher over the last line:

“The monsters were based on relatives. They came from Europe, and they came on weekends to eat, and my mom had to cook. Three aunts and three uncles who spoke no English, practically. They grabbed you and twisted your face, and they thought that was an affectionate thing to do. And I knew that my mother’s cooking was pretty terrible, and it also took forever, and there was every possibility that they would eat me, or my sister or my brother. We really had a wicked fantasy that they were capable of that. We couldn’t taste any worse than what she was preparing. So that’s who the Wild Things are. They’re foreigners, lost in America, without a language. And children who are petrified of them, and don’t understand that these gestures, these twistings of flesh, are meant to be affectionate. So there you go.”

And on the last line, in which Max returns to his home to find his dinner waiting for him, “and it was still hot”:

“The entire staff at the publishing house were keen on my changing the word ‘hot’ to ‘warm’ on the last page. Because ‘hot’ meant ‘burn.’ … It was going to burn the kid. I couldn’t believe it. But it turned into a real world war, just that word, and I won. Just going at it. Just trying to convey how dopey ‘warm’ sounded. Unemotional. Undramatic. Everything about that book is ‘hot.’”

The New York Times has posted an obituary of Sendak which you can read here – and if you have any memories of reading Sendak, please do share them in the comments.