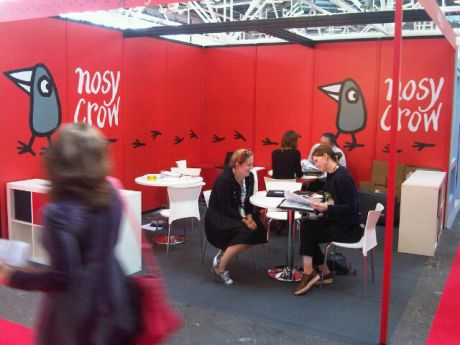 The Bologna Book Fair is many things, but the main thing it is is a market for rights and co-edition selling.

As a publisher, you have a grant of rights from an author and an illustrator, including the right to publish their work as a book. Sometimes – always if you’re Nosy Crow – you have rights that you do not want to use yourself, but are able to sell to someone else. So Nosy Crow doesn’t itself publish in Finnish, but we know several Finnish publishers who like the books we do and who would like to publish them in Finnish. So we negotiate a deal with them, and the author/illustrator gets a share of the money we make when we sell the rights.

If you are publishing illustrated books – and over half of Nosy Crow’s list is illustrated in full-colour – there is another element to rights selling: building a co-edition run. There are certain costs associated with printing a book which are the same whether you print one copy or 100,000 copies, and it makes sense to spread those costs over as many books as possible. So the aim of the game is to say to the Finnish publisher that not only will you sell them the rights to publish the book in Finnish, but you will print the books for them in Finnish too.

So, in the course of the fair, two of us Nosy Crows – Adrian and me – were hard at it selling for three-and-a-half days. Between us, we had 90 pre-booked appointments with 90 different publishers from 20 countries… and a few appointments with film companies and other people too.

We were able to finalise a number of rights deals on books that had been in discussion in the course of the weeks leading up to the fair, and we have lots of interest to follow up for newer books that we had been working on in the weeks and months before the book fair that we’ll publish in 2012.

It’s bizarre to think that a queue for the loo (and the queue for the women’s loos at Bologna is always long) might make the difference between having an appointment that lasts 30 minutes and one that lasts 20 minutes… and that therefore, because you lost 10 minutes of an appointment, you might fail to make a deal that would have worked for both of you.

The skill of selling is, therefore, to cut to the chase and not waste time talking about books – however much you love them yourself – that are failing to ignite the enthusiasm of the person opposite you.

Of course, the longer you’ve been selling rights, the better you know markets, publishing companies within those markets and individuals within those publishing companies, so it’s easier to know what books to show to whom. And it’s certainly the case that there are people that I meet at fairs that I would count as friends, with whom I have been talking about children’s books for almost a quarter of a century. There are people whose reaction I can predict before I show them a book, and many people with whose own tastes and views of publishing I feel real affinity, despite the fact that we operate in different companies and countries. (And since we are nothing if not honest in this blog, there are people I have absolutely failed to connect with over years of book fair meetings. It’s a joy of being an independent company that I just don’t book an appointment to see them any more…)

So, as well as all the excitement of speaking at the Tools of Change Conference and as well as our apps deal with Gallimard and Carlsen, we got on with the solid, unflashy, necessary and very satisfying thing we do every day: we sold print books.

Chance to win a free copy of The Three Little Pigs app on CoolMomTech.com