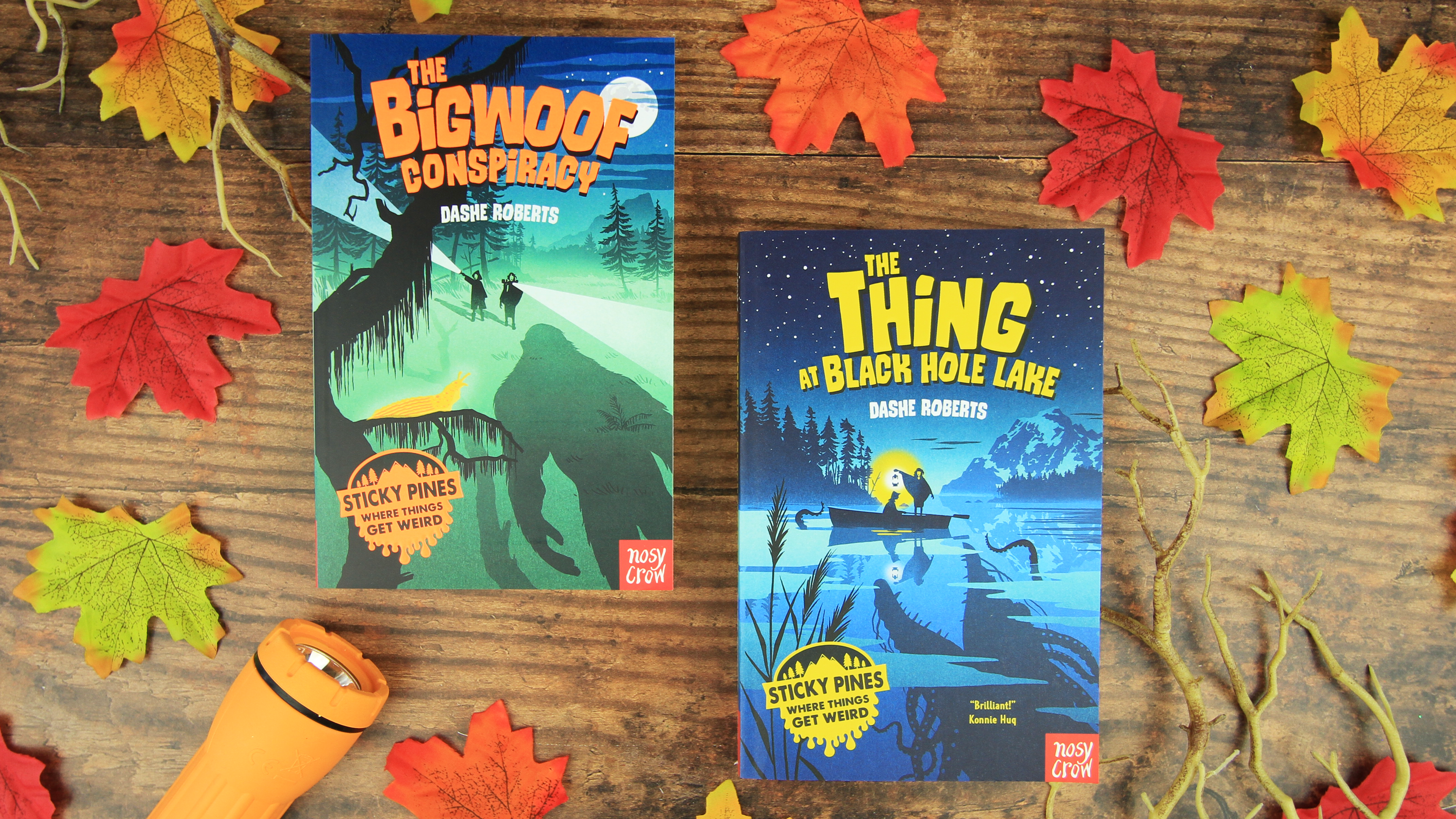 Halloween is almost here! Today we’re excited to share this guest post from Dashe Roberts – author of the hair-raising Sticky Pines series – on where spooky stories come from, where she finds inspiration, and some tips for writing your own.

It’s that time of year again, when the leaves turn blood-red and tumble from the treetops with a ghoulish glee, when the days grow darker and the nights grow longer, and when everything starts to feel just a little bit SPOOKY.

Halloween is my favourite time of year. If you’ve read the books in my Sticky Pines series –where things get very WEIRD and a little bit spine-tingly – you might not be surprised to hear this! I, like many readers, have always enjoyed stories with hair-raising action, strange creatures, and seriously scary bumps in the night. In fact, many of my favourite pulse-quickening stories helped to inspire the eerie world of Sticky Pines.

Since the days of the ancients we humans have found it great fun to scare ourselves on purpose, something that is evident in the many scary tales passed down through the generations. In the 1st century A.D. the Roman senator Pliny wrote that he had witnessed the spectre of an old man with a long beard at his house in Athens, loudly rattling his chains. And in England, sightings of Ann Boleyn’s ghost have been reported ever since King Henry VIII’s wife was executed in 1536 following accusations of witchcraft and treason.

Ghost stories have proven wildly popular all over the world, from the djinn demons in One Thousand and One Nights – the Western compilation of Middle Eastern folk tales that made Aladdin famous – to the headless horseman of Washington Irving’s 19th-century story Sleepy Hollow in American literature. Growing up in America, I loved spooky stories: a particular favourite was Alvin Schwartz’s trio of books beginning with Scary Stories to Tell in the Dark, which explore the kind of frightening folklore that people have been telling around campfires for centuries. From songs about wriggly worms squirming in corpses, tales of severed limbs, ghoulish scarecrows and creepy haunted houses, to urban legends about men with hooks for hands, these chilling books have all it takes to scare you senseless!

If you like your books more on the strange side than the ghastly side, Neil Gaiman’s modern classic Coraline might do the trick. The title character finds herself crawling through a hidden tunnel in her new house, where she discovers a parallel world eerily similar to our own, but where everything is a little bit… off. I love the uncanny imagery in this book, especially the “other mother” character with buttons for eyes! Stranger still is A Wrinkle in Time by Madeleine L’Engle, a science fiction wonder that begins on a windy, lightning-filled night, and takes its protagonists on an adventure across the galaxy. There, they encounter terrifying star-eating monsters, civilisations filled with dead-eyed obedient slaves, and a disembodied villain bent on controlling everything in its path…

Some other fabulously ghoulish reads to snag this Halloween season include The Orphans of St Halibuts by Sophie Wills, a wickedly funny book about a trio of orphans who must use their wiles to get by after the untimely death of their headmistress, and The Midnight Hour by Benjamin Read and Laura Trindles, about a girl whose parents disappear one night and the magical monsters she encounters in their absence.

Even more fun than READING a scary story, though, is WRITING your own! The first thing to do is to create a suitably spooky setting. Where will your story take place? If it’s in a house, what kind of house is it? A sparsely furnished one where footsteps echo in the halls, or a cluttered, creaky old building with hidden doors and a forgotten cellar? Don’t forget to think of the five main senses… how does your setting smell? What does it look and sound like? Does it feel stiflingly hot or chillingly cold? Can you taste the decay in the air? Write down five seriously creepy details about your setting as you brainstorm what horrifying events will befall the characters you are about to create.

Once you’ve got your setting sorted and brainstormed a few ideas about what might be lurking therein, it’s time to get to work and let the imagination run wild! Start with “It was a dark and stormy night” and go from there. If you have more than one child nearby, ask them to take turns writing for two minutes each, then swap stories by passing their paper to the right. After ten minutes of writing, you’ll have some seriously scary, strange and uncanny stories to share by torchlight – IF YOU DARE…

Thank you for those spine-tingling tips, Dashe!

You can read an extract from the latest book in the Sticky Pines series, below: