Pip and Posy are reaching for new heights in 2022, following their recent win at the British Animation Awards last week. The playful pair were up against stiff competition from Hey Duggee, The Adventures of Paddington, Circle Squad and Milo, but on the night the production team behind the TV series, Magic Light Productions, took home the award for Best Preschool Series for their charming episode ‘Night, Pip’. 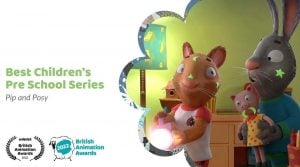 The judges of the award called Pip and Posy “an excellent show that tells a simple but very relatable story well. This charming episode perfectly captures the spirit of friendship and play in a well-crafted world that feels safe, but not twee. Good combination of humour worked through the episode and realistic age-appropriate issues and emotions handled beautifully. High production value, great character design and relatable story for children made for a winning combination.”

Before Pip and Posy found success on the small screen, they started life as a series of picture books, devised and created by Nosy Crow’s co-founder and author, Camilla Reid, and illustrated by the award-winning illustrator Axel Scheffler. Each story followed a mouse and a rabbit as they experienced the very real ups and downs of a child’s life: friendships, disappointments, potty training, emotions and bedtime challenges, to name a few. Over the last eleven years, the picture book series has sold 5 million copies and been translated into 26 languages.

The launch of the animated TV series in March 2021 coincided with the tenth birthday of the publication of the first Pip and Posy titles. 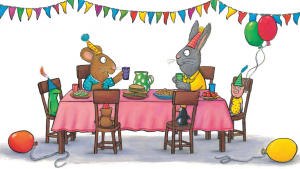 So, it seems rather fitting that the launch of our TV tie-in publishing programme begins in the same year that Pip and Posy reach another milestone, with this award and the recognition of Magic Light Picture’s work by the animation industry.

In June 2022, Nosy Crow will publish two TV tie-in sticker activity books. Best of Friends introduces this playful pair and invites everyone to join in their wonderful world of play with puzzles, games and stickers galore! Come On, Let’s Play! is full of fun-filled activities that will delight fans of the Pip and Posy TV animation, featuring artwork from the episodes, alongside dot-to-dot, colouring, search and find sticker scenes and much more to keep little hands and minds busy. Our trio of sticker books this year is completed by a festive Christmas activity title that publishes in October, and celebrates the joy of the season with Pip, Posy and their friends. 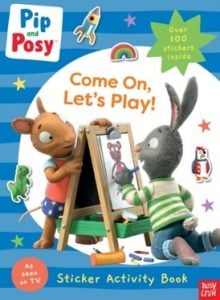 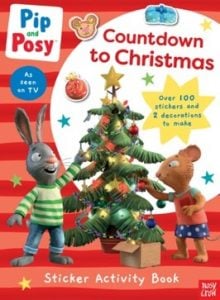 In August 2022, Nosy Crow will publish two new tabbed board books that feature artwork from the TV series. Children’s emotions and how to navigate them are gently explored in Pip and Posy: How Are You? The second tabbed board book, Favourite Things, is perfect for all children wanting to learn about the world of Pip and Posy and their friends, as it celebrates the characters’ differences and how those differences bring the friends together. 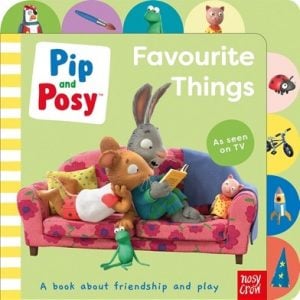 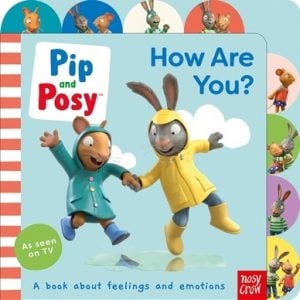 Our final TV tie-in title this year is a lift-the-flap board book full of Christmas fun, from opening presents and singing carols, to playing in the snow and putting on a winter show! Each page has flaps to open and Christmas objects to search and find. 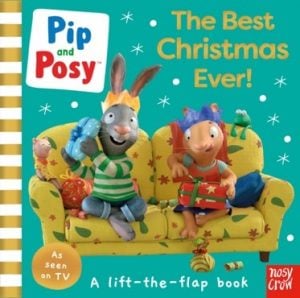 As the editor of our Pip and Posy TV tie-in programme, I have enjoyed bringing this cherished picture book series into a new strand of publishing. The TV series is full of warmth, humour, friendship and imaginative play, and this delightful combination means Pip and Posy’s world really is a dream come true for creators of stories in all mediums.

Congratulations to the team at Magic Light Pictures, and three cheers for Pip and Posy!