Tag: Ruffles and the Red

Sketching Ruffles and the Red, Red Coat – a guest post by David Melling

This month we’re very excited to have published Ruffles and the Red, Red Coat, by bestselling author and illustrator, David Melling – a brightly illustrated, adorable new picture book about the tricky troubles of toddler life.

And today we’re very pleased to share a guest post by David on developing the character of Ruffles, which you can read below.

When Nosy Crow and I first began sharing story ideas I had a sketchbook with me and it was this small sketch that caught their eye. 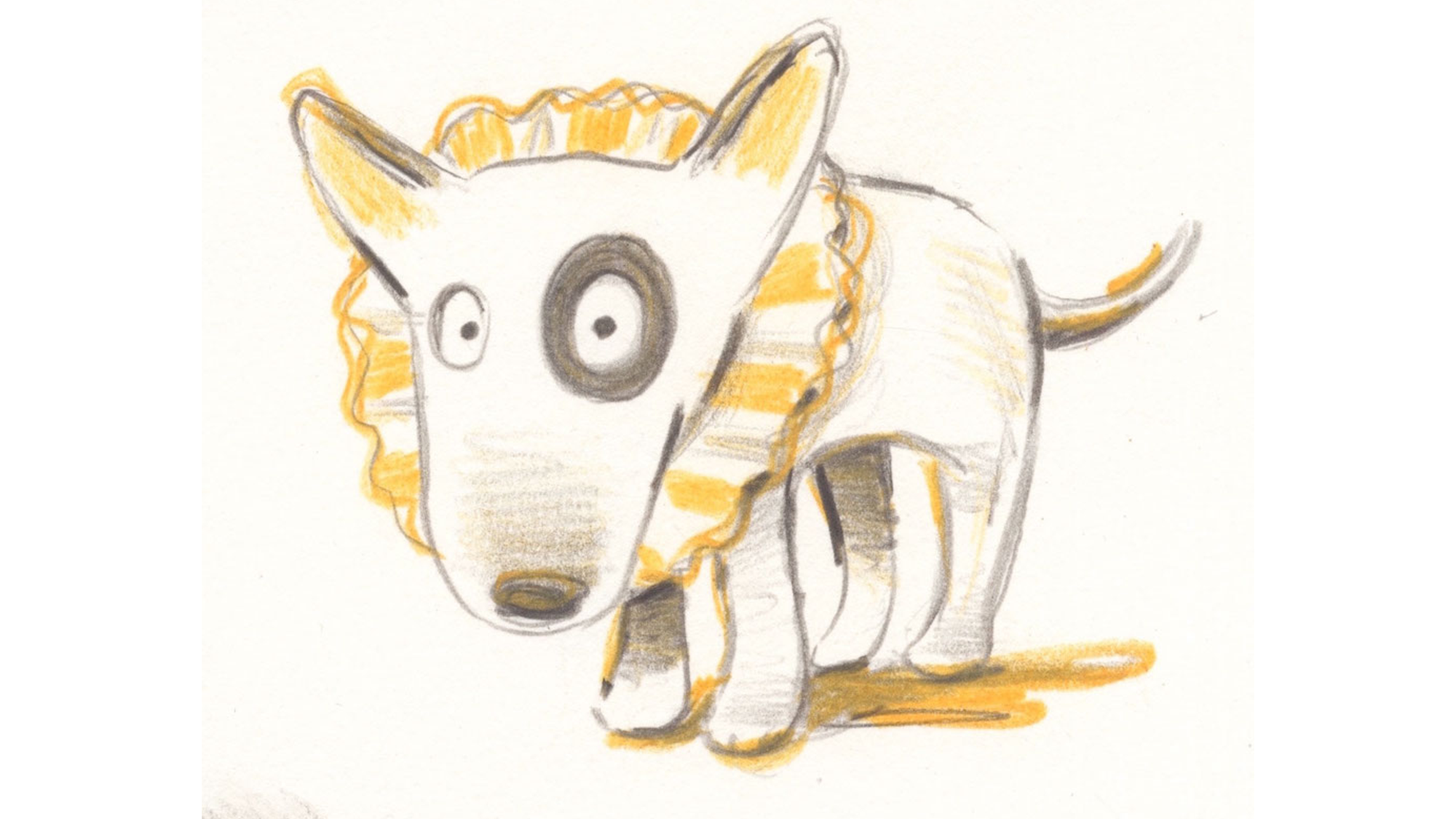 I called him Ruffles on account of the ruff collar. My intention was for the story to focus on this fashion accessory only, it wasn’t as forthcoming as I’d hoped. In my sketchbook, I replaced the ruff collar with a vet’s cone and began thinking about all the different ways Ruffles could acquire spots.

Early sketch of Ruffles with vet’s cone and spots

This was better, but again, it wasn’t chiming quite right. With a bit of luck, a good feeling is felt with the initial sketches. However, on this occasion, we felt something was missing. So I reset and went back to what I normally do when I start out – I drew a lot.

This is probably my favourite part of the process. Drawing Ruffles again and again helps me settle on his overall design while at the same time, finding his character and personality. I try to do this with my pencil rather than pen. Sketching him in a range of poses, with strong body posture, with a variety of expressions and emotions. All this helps me get to know him – the tilt of the head, the shape and angle of his ears, the behaviour of his tail.

As I drew Ruffles, I asked myself questions: how old is he? Is he shy, naughty, inquisitive, bold, messy? I started adding words and phrases alongside certain drawings, but at this stage, the writing was fairly minimal. Meanwhile, the drawings continue as I set about drawing Ruffles and Ruby together. Even at this stage, the sketches I produce can contribute to the story. 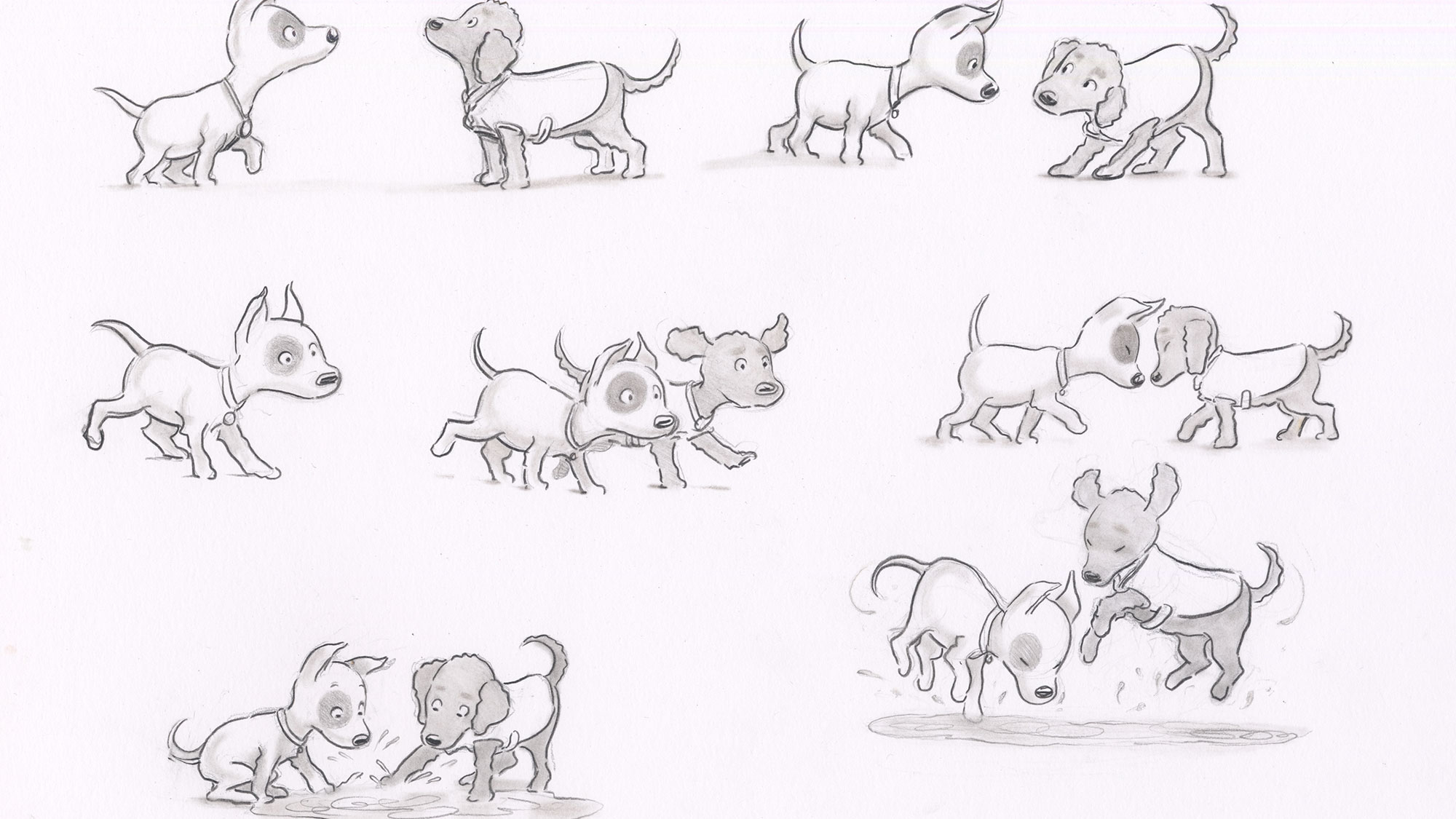 Early sketches of Ruffles and Ruby playing together

As the material builds so do possible storylines. It’s around this time, I move on to an exercise that helps me to develop story ideas. It’s a drawing exercise that I read the great illustrator Maurice Sendak created for himself as a way of loosening up to explore interesting themes and ideas. His idea was to draw quickly to a set time (for him it was a piece of classical music). Using an A4 piece of paper, top left to bottom right, you draw a sequence – any sequence of images – without pausing or thinking too much ahead. In my case, I set myself ten minutes and began with Ruffles doing ‘something’ – looking grumpy, digging a hole, chasing a bird… and just see where it goes.

This process is not always successful in producing a complete narrative. Yet almost every time I have something I can use, be it a gesture, an expression, a brief sequence. Something nearly always emerges that surprises me.

Up to this point, there’s still little writing. But now, with an idea of narrative hopefully taking hold, I’ll take these sequence drawings and begin thumbnailing a storyboard. It’s not unusual for me to draw most of the story before the writing – that’s how it works for me. I know others always write the complete story first before they even pick up a pencil. Whatever works for the individual, each to their own!

Early storyboard of Ruffles and the Red, Red Coat

Once I have one or two storyboards going, that’s when I finally put down the pencil, close the sketchbook and start writing. Often, by this time I’ll have about 80% of the narrative worked out. Once I’m happy with my first draft I file the lot – sketches, storyboards and draft – and send them to my editor with a few bullet points of my thoughts. What follows is some back and forth, some editing, more drafts, a whole lot more drawing and eventually, with a bit more luck, a clear path to a finished story.

A quick word on the final art: Ruffles is the first book I’ve worked on where I’ve moved out of my comfort zone. Throughout my career, I’ve used traditional tools – pens, brushes, paint. But with this book, I used a new tool: Photoshop. It’s not something I was naturally drawn to, as I’ve always been a bit of a technophobe, but I enjoyed the process and I’m really pleased with the fresh direction that it took my work. Nosy Crow, and in particular my wonderful designer Manda Scott, has been instrumental in helping support me with this, for which I’m extremely grateful. Thankfully, it’s been a journey worth taking and I hope you enjoy the results too.

Thank you, David! Ruffles and the Red, Red Coat is out now – you can order a copy from Waterstones here, Bookshop.org here, or Amazon here.

Take a look inside the book below: