Tag: There’s a Mouse In My House

Winners of our There’s a Mouse in My House competition!

We’re delighted to announce the winners of our There’s a Mouse in My House competition, run in partnership with the Reading Agency. We challenged young readers to design a new jumper for Mouse and were blown away by the hundreds of colourful and cosy creations that were sent in.

Choosing the winners was so difficult, as judge Ross Collins, author and illustrator of There’s a Mouse in My House, found out! We are delighted to share with you the winning entries in a gallery of jazzy jumpers. The winners will each receive a signed set of books by Ross Collins. Congratulations!

Thank you to everyone who entered our competition – we were amazed by all your amazing efforts and talent!

There’s a Mouse In My House, the sequel to the award-winning There’s a Bear On My Chair, is out now – you can pick up a copy from Waterstones here, Bookshop.org here, or Amazon here.

There’s a Mouse in My House: Why I done it.

Today’s guest post is by author-illustrator Ross Collins, on the origins of his brand new picture book, There’s a Mouse in My House, the long-awaited sequel to the award-winning There’s a Bear on My Chair.

It’s been five years since my book There’s a Bear on My Chair was published. It feels like ten. It feels longer because I think I’ve read this book, performed it to audiences, more times and in more places than anything else I’ve ever written.

People like it and buy it and say very nice things to me about it. I had a letter from a wee girl called Nina from Sammamish about it yesterday. Where’s Sammamish? I have no idea.

Approximately half of the people who talked to me about it asked me the same question: “When’s There’s a Mouse in My House coming out?” They never asked me what the sequel would be called – they just told me what it would be called. Eventually I figured that if I ever did do a sequel it would be churlish to call it anything else.

But I wasn’t that keen to do a sequel. For two reasons.

Firstly because a lot of sequels of successful books are rushed out. They tend to have that ‘second album’ cash-in syndrome where they are never as good as the first and are quickly forgotten. They can even tarnish the original if you’re not careful.

It would take time to come up with something worthy of following Bear.

Secondly because ‘Bear’ turned out to be an amazing single rhyme. Meanwhile ‘Mouse’ ain’t so good. Think about it. Douse. Grouse. House. Louse. Nous. Spouse. There are only so many scenarios I can think of that involve a mouse and a grouse.

So I sat on it, did other things, but eventually after being asked by a particularly persistent little red headed girl on Guernsey when There’s a Mouse in My House was coming out, I decided to have a go at it. 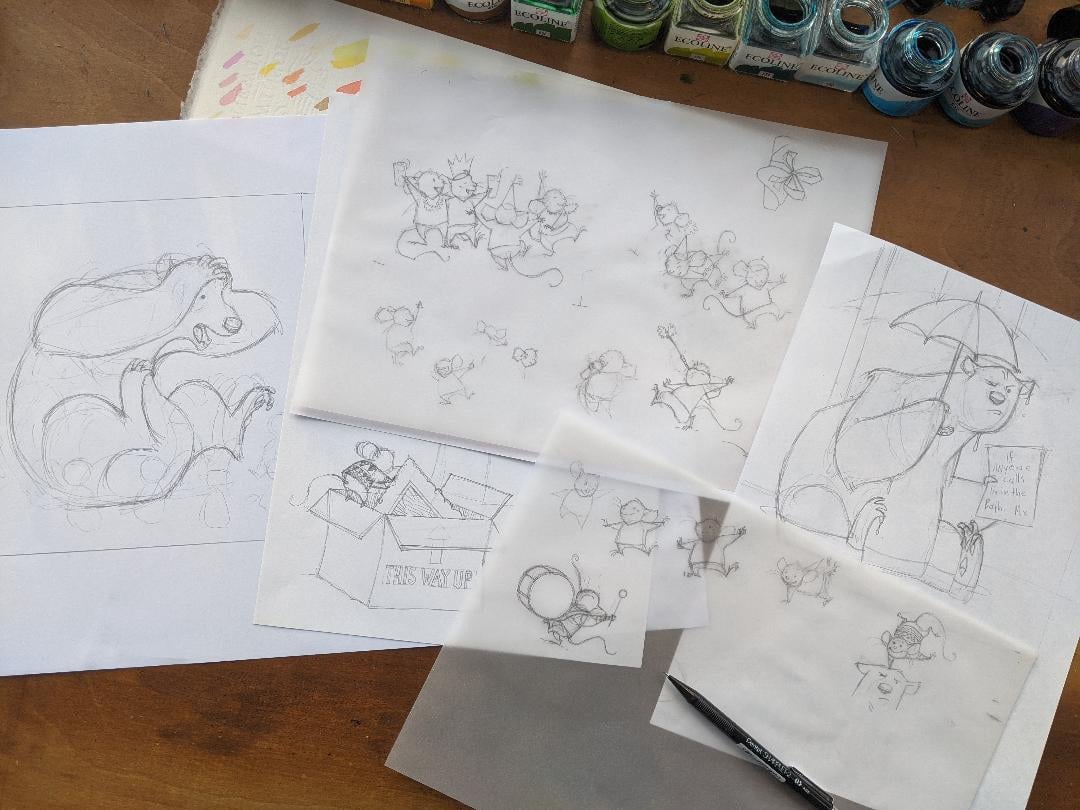 He’s unpacked all his stuff just so.

I’ll tell him that he has to go.

All of a sudden I got to play with images of taekwondo, Andy Warhol mice, big banana boots and air-guitaring to soft rock. Who knew?

But the main joy of doing There’s a Mouse in My House was in swapping the dynamic of the characters. In the first book Bear is in control and Mouse is the one who is slowly losing his mind. Wouldn’t it be fun to see the tables turned?

A great deal of the joy of illustrating animals is to instil human emotions in them through their body language and micro expressions. I really enjoyed turning the smug bear into a beleaguered grouch and the angry mouse into a devil-may care unwanted guest.

As I worked it seemed to make more sense. Doing this book balances the scales. The mouse’s revenge for all he went through in the first book. It seemed right. They sit well together.

And the ending? Well hopefully it draws a nice line under the power struggle of this unhappy pair.

There definitely won’t be a third one.

And if you do see a book in the shops in 2025 about a mouse and a bear shooting grouses with their spouses then please address complaints to my publishers.

Thank you, Ross! There’s a Mouse in My House is out now – you can take a look inside the book below, and buy it online from Waterstones here, from Bookshop.org here, and from Amazon here.

New books out in October!

It’s our October publication day! We’ve got fifteen incredible new books coming your way this month – from brand new board books and picture books to illustrated non-fiction and fiction, there’s something for everyone.

Four of the books below will be published on October 15th – Listen to the Carnival of the Animals, National Trust: 2021 Nature Month-By-Month: A Children’s Almanac, A Treasury of Nursery Rhymes and Poems, and our new edition of Earth Heroes – which you can pre-order now.

Here’s a closer look at the new Nosy Crow books you can find in bookshops, and online, this month.

Listen to the Carnival of the Animals, illustrated by Marion Billet (published October 15th):

Pip and Posy: The Christmas Tree, by Axel Scheffler (now available in board book):

Who’s Hiding in the Snow, illustrated by Katharine McEwen:

There’s a Mouse in My House, by Ross Collins:

Be Kind, Be Cool, Be You, illustrated by Nikki Miles:

A Donkey Called Mistletoe, written by Helen Peters and illustrated by Ellie Snowdon:

A Chase In Time, written by Sally Nicholls and illustrated by Rachael Dean:

A Christmas In Time, written by Sally Nicholls and illustrated by Rachael Dean:

Congratulations to all of our authors and illustrators with books out today! If you’d like to keep up-to-date with all of our book news and future releases, you can sign up to our newsletter at the bottom of this page.

Take a look inside There’s a Mouse in My House

And today, for the very first time, you can take a look inside the book!

The tables have turned in this fantastically funny rhyming picture book. This time, it’s Bear who has an unwelcome guest, and that cheeky mouse just won’t leave. He’s making a real commotion in Bear’s house – eating all the food, listening to loud music and even spilling bathwater all over the floor! But when there’s an unexpected knock at the door, Bear decides that perhaps mice are actually rather nice!

There’s a Mouse in My House will be published this October – you can pre-order a copy from Waterstones here, Hive here, or Amazon here. And be sure to check out other hilarious picture books by Ross Collins, There’s a Bear on My Chair, This Zoo is Not For You, What Does An Anteater Eat, and This is a Dog.

If you’d like to stay up-to-date with all of our book news, you can sign up to our books newsletter at this page, or with the form below.