Ten books, ten years: the inspiration behind the Pip and Posy series

It’s been ten years since we published the first Pip and Posy title, and with a satisfying bit of numerical symmetry, the tenth title – The Birthday Party – is published this month. Since that time, the series has sold 5 million copies worldwide, been translated into 26 languages, and launched this year on Milkshake/Sky as an enchanting new animated TV series. But I must admit, when I wrote the first two stories for my then-two-year-old (now a full-sized teenager who’s just done her GCSEs) I never dreamed that they would see such success – it has been a career highlight, of that there is no question.

At the time, I’d noticed that while my daughter loved me to read to her and wanted to be entertained by books, she’d started to find board books and first-word books too slight, narratively. I could see that she was ready to engage with the story, to follow a plotline and to identify with characters but, equally, anything but the most basic of vocabulary and narrative thread left her baffled – she just couldn’t follow it. I also observed that she actively enjoyed a little bit of drama and some light jeopardy, and that she took pleasure in seeing how the characters resolved problems – but for her to understand what was going on, the plot needed to be incredibly straightforward.

So, that is how the books came into being – I was trying to fill a gap that I felt existed in the market for eventful, but simply-told stories, featuring characters that a toddler identifies with, and which have a satisfyingly happy ending.

I chose to write about two characters, a female and male, who are different animals but friends and equals. I had noticed that when toddlers play, they often pretend to be adults, so I decided that although the characters would have child-like concerns, they would inhabit a parallel, semi-real world without parents around to fix any problems – the characters needed to be independent and to have agency within the story.

The stories I came up with centred around the routines and concerns of ordinary toddlers – going to the park, navigating friendships, potty training, hurting themselves, feeling sad, bedtime issues. And broadly, every story would follow a narrative arc of 1) beginning/set-up, 2) introduction of a problem, 3) eventual resolution, and 4) final, happy ending. Whereas most picture book texts are around 500 words long, I wanted these stories to be much shorter – between 150 and 300 words, ideally. I also decided that, if possible, all the stories would be punctuated by the same set phrases – usually, Oh dear! Poor ! and Hooray! My instinct was that children like to get involved in a story, and by giving them phrases to join in with, they are drawn in and made to feel important. Looking back on it, I also think it helps them by signposting the narrative, so they become familiar and comfortable with a narrative arc and the conventions of storytelling.

I had written both The Super Scooter and The Scary Monster in 2009, before Kate and I had started to have conversations about setting up a new publishing company, and at that point, the characters were called Duck and Birdie – mainly because ‘duck’ was both my children’s first word and so I knew it was easy for most toddlers to pronounce. In the first few weeks of Nosy Crow’s life, it was Kate who suggested that Axel illustrate them, and she chose Pip and Posy as their names. I was, obviously, delighted that Axel was going to bring them to life – but it was decided that they should be a rabbit and mouse rather than birds, as he prefers drawing rodents! It was a good idea, it turns out, and they have huge warmth and charm as a result.

The final thing to mention is that I was very keen for the characters to avoid gender stereotypes and to be free from fixed personality traits – I wanted them both to behave, by turns, empathetically, resourcefully, sensitively, selfishly, greedily, or creatively. Quite often, I wrote a story and then swapped the characters, just to ensure that neither one ever became stuck with a certain set of behaviours.

Fittingly, the tenth title is The Birthday Party and so has a celebratory feel. Of course, as with all the stories, something goes wrong – quite spectacularly in this case – but, as ever, it isn’t the end of the world, and Pip and Posy find a way of negotiating the apparent disaster. There’s a lesson for us all, there.

Take a look inside The Birthday Party below: 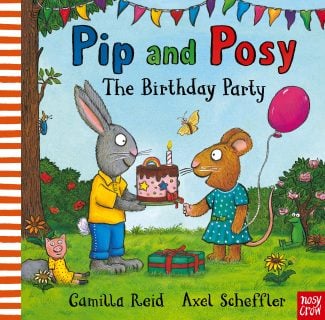 Pip and Posy: The Birthday Party

The Secret Garden is out today!