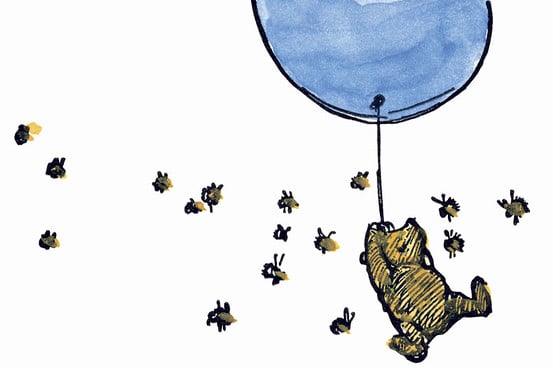 Ten of the best bears in children’s literature

When Ola suggested this theme to me for a blog post, I couldn’t believe we hadn’t covered it before – it is absolutely crying out to be written – but it seems she’s right. Of all the best-loved and most iconic figures in children’s literature, an awfully large number are ursine. I don’t know that I really have the patience to investigate why we’re so fond of fictional bears (the cultural prevalence of the teddy bear? the fact that they can stand on two legs? the predilection for honey?), so without futher ado, here are ten of our favourite books with bears:

The bear of very little brain is possibly my favourite character in any book, ever, and A.A. Milne’s stories stand up, in my view, as some of the best comic writing of the last century. Winnie-the-Pooh is my I Ching: there is something to learn on every subject, whether it’s bees (“You never can tell with bees.”) or testing honey for cheese (“I remember my uncle saying once that he had seen cheese just this colour.” So he put his tongue in, and took a large lick. “Yes,” he said, “it is. No doubt about that. And honey, I should say, right down to the bottom of the jar. Unless, of course,” he said, “somebody put cheese in at the bottom just for a joke. Perhaps I had better go a little further… just in case…”)

Paddington was Ola’s immediate suggestion: he is perhaps the only bear who can rival Winnie-the-Pooh for the nation’s affections (and his fondness for marmalade equals Pooh’s love of honey). He is a quintessentially English creation… even if he is from Darkest Peru.

I Want My Hat Back by Jon Klassen

A very different sort of bear to Paddington and Pooh – Jon Klassen’s picture book has become a modern classic: funny, dark, and stylish, with an ending that will make you gasp. It’s brilliant.

We’re Going on a Bear Hunt by Michael Rosen, illustrated by Helen Oxenbury

Another contemporary(ish) classic, the bear in Michael Rosen and Helen Oxenbury’s fantastic story doesn’t actually appear until three-quarters of the way in, but it looms over the entire narrative as a sort of spectral presence, and its eventual arrival – “One shiny wet nose! Two big furry ears! Two big goggly eyes! IT’S A BEAR!!!!” – is as wonderfully dramatic as the final spread is melancholy.

Peace at Last by Jill Murphy

The bear family in Jill Murphy’s picture book might as well be people, they are so thoroughly domestic. But they aren’t – they’re bears, and somehow that adds a wonderful pathos to Mr. Bear’s inability to get to sleep.

Baloo might be the coolest entry on this list. His most famous incarnation is in Disney’s animated film version of The Jungle Book, and although he’s quite a different sort of character in the books (in which he’s a rather stern teacher of the Law of the Jungle), he’s still a Very Good Bear.

Pullman’s Iorek Byrnison is possibly unique on this list for being the only truly frightening bear. He’s also an incredible hero: brave, loyal, kind, and a great friend to Lyra.

Goldilocks and Just the One Bear by Leigh Hodgkinson

The first of three of our own books on this list, Leigh’s brilliant fractured fairytale picks up the story of Goldilocks many years later, when Little Bear wanders out of his forest and into the big city. All he wants is a bowl of porridge and maybe a bit of a lie down – how hard can that be?

This is one phenomenally busy bear. He puts out fires, he has fun on the farm, he finds pirate treasure, he goes to work on a building site, he goes on holiday, and he plays in a park – rich in visual detail and with chunky sliders to push and pull, Benji Davies’ fantastic Bizzy Bear series is perfect for toddlers.

Because I Love You by David Bedford, illustrated by Rebecca Harry

An absolutely charming picture book (which publishes in October), featuring a little bear who’s not sure that he’s had enough love that day. Together with Mummy Bear he goes on a journey, and together they remember all of the love they’ve shared. These two bears are guaranteed to warm the heart.

… And here’s one bonus bear:

A Boy and a Bear in a Boat by Dave Shelton

We’ll be reading this recent winner of the Branford Boase award at our next book group in August – if you’d like to come (and decide whether this is one of your favourite bears), you can find all the details here.

Now, over to you – what would you add to this list? Which bears have a place in your heart? Leave your comments below or on Twitter with the #bookbear hashtag!

Win copies of our August books!