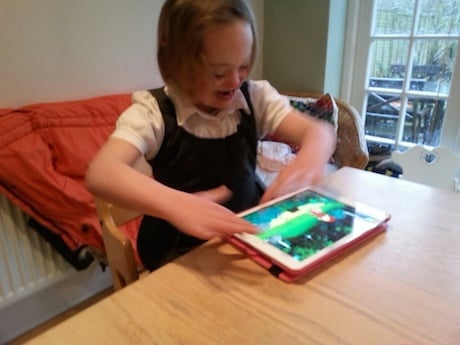 Today’s guest blog is by Ines, a child with Down’s Syndrome whose mum, Carolyn, contacted us on Twitter to let us know how much Ines was enjoying our apps (you can see her above, playing with our Little Red Riding Hood app). Ines has kindly shared a list of some of her favourite apps with us – here they are.

I find most things in life funny. I am only really sad when I am ill.

I can say a few words like ‘happy’, ‘bubbles’ and ‘dance’. I use Makaton™ signs to help you understand me.

My favourite two things are disco dancing and my iPad. My iPad was given to me by the lovely people at the Matthew Russo Foundation. Mummy met them on Twitter.

I love to film myself and my family using my iPad. I have taken thousands of brilliant pictures and videos.

I want to share my favourite iPad apps with you:

Temple Run and Subway Surfers: My family watch in amazement as I can get miles along in these games. Something about the dodging and running comes easily to me. When I finally fall off or get run over I think it’s hilarious. Then I just start over again. My top score on Temple Run is 3,496. That’s even better than my older brother.

Toca Hair Salon: This was my first Toca app and it’s so funny. You make hair styles for people. I like to shave all their hair off and then put pink extensions on!

Toca Band: All the Toca apps are brilliant but Toca Band is my favourite. You choose different sounds and put them together to make music. Some of the sounds are really funny and the music always sounds good no matter what you pick.

Talking Tom Cat: There are lots of apps that talk back to you but Talking Tom is my favourite because I love cats. He is great for getting me to practice my words. I can shout noises at him and he shouts them back! But mostly I like cleaning his teeth and putting him on the potty. He unwinds the loo roll for ever, just like I do.

Moto X Mayhem: I like to zoom the man along on his motorbike, then when he falls off you can pick his body up and throw it around. It’s brilliant but Daddy says it makes him feel sick.

Endless Alphabet: This is great. You have to fit the letters into the words. That sounds boring but it’s not. The words wiggle and squeak, then they cheer when you get it right and walk off the page! The words are a bit difficult for me, but that doesn’t bother me.

Nosy Crow: By far my favourite iPad apps are the Nosy Crow animated fairy tales. And I’m not just saying that because this is their blog – I’ve been their biggest fan since they started. I play the best bits over and over again:

Little Red Riding Hood: I love putting the food in and out of the basket and shouting BASKET. I also love it when the wolf chases Red Riding Hood around the table. I can do this bit for hours, although it makes me laugh so much sometimes that it’s hard to sit up. The mini-games are great too.

The Three Little Pigs: PIGS is a great word to shout. I like helping them to build their houses. When they run away from the wolf I get very excited and jump up and down. Then he gets his bottom burned on the cooker! Ha ha, serves him right.

Cinderella: A real favourite (‘ELLA). I love helping Cindereralla put away all the things in the kitchen. There is lots of magic in this story, like when the pumpkin turns into a coach. But the best bit is the Prince and Cinderella disco-dancing at the ball.

Jack and the Beanstalk: BEANSTALK is a great word. Me and Mummy made a beanstalk out of green paper and real leaves and put it on the wall. The giant’s castle has lots of rooms to explore. You can help the cook stir the soup or play the piano. But by far the best bit is the attic. You help shoo the bats out and I shout BATS! every time and collapse with laughing. I can shoo the bats out for a very long time. Until my brother can’t stand my happiness any longer.

I like doing other things too, like swimming, or bouncing on the trampoline, but my mum and dad won’t let me play with the iPad while doing those. That’s a shame as I think that would be the best thing ever.

Thank you so much for sharing your favourite apps with us, Ines! If you know of other apps that are great for children with special needs, please do share them below in the comments or on Twitter.