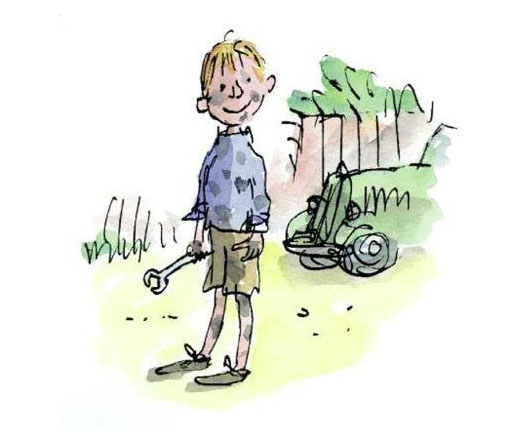 As Father’s Day approaches, a look at dads in books for children

It may well be true that Father’s Day is without a jot of authentic tradition to its name, but that doesn’t mean it isn’t fun to celebrate. At Nosy Crow we’ve been listing our favourite dads in children’s literature all week, and what started out as a harmless pub game between Kate, Camilla and me has spiralled rather dramatically into a mammoth collection of categories, sub-categories and clauses.

Being a bit of a purist about these things, I initially protested to Kate that our list should be comprised only of nice dads, and that bad dads would go against the spirit of the exercise somewhat – this is for father’s day after all! – but we all realised pretty quickly that a lot of the best characters are really awful fathers.

This initial concession led to a proliferation of different categories.

Here are our best categories and our strongest nominations, with, where I felt it necessary, some context or justification. Please add your own categories or nominations in the comments below or on Twitter with the hashtag #kidsbookdads or Facebook!

William from Danny, the Champion of the World (written by Roald Dahl and illustrated by Quentin Blake, see the picture above). This is a pretty uncomplicated one – I think we can all agree that William is an amazing and exciting dad (even if he does lead his son into a life of crime). The opening chapter is a really lovely and quite moving tribute to the relationship between father and son.

The dad in Chitty Chitty Bang Bang by Ian Fleming is another good example of an exciting dad.

The dad in Millions by Frank Cottrell Boyce is a favourite of Kate’s.

… And we have two from the incoming one: Stick Man from Stick Man whose quest is to get back to his family tree, and the gruffalo, from The Gruffalo’s Child, who tries to warn his adventurous child against the mouse. Both are written by Julie Donaldson and illustrated by Axel Scheffler.

Pa Ingalls from Little House on the Prairie by Laura Ingalls Wilder.

John Arable from Charlotte’s Web by E. B. White.

And Tango Makes Three, by Peter Parnell and Justin Richardson and illustrated by Henry Cole, is an inspired choice by Camilla – the true story of the two male penguins in New York’s Central Park Zoo who raised a baby penguin together.

Two excellent suggestions by Kate B were Mr. Brown from Paddington (by Michael Bond) and Pongo from 101 Dalmations (by Dodie Smith).

Atticus Finch from To Kill A Mockingbird (by Harper Lee). I have had to lobby quite hard for inclusion of Atticus Finch: on the one hand, he is, of course, the greatest father in any book, but is To Kill A Mockingbird really children’s literature? Well, it was treated as such on its release in 1960, and it’s taught all over the world in schools, so I think that makes it not not children’s literature.

Kate made the very interesting suggestion of Anne Frank’s father, “especially in contrast to how she portrayed her mother”.

My contribution to the sub-category of real-life good dads is Michael Rosen in his poems about his son Eddie, which reach their heartbreaking conclusion in Michael Rosen’s Sad Book.

Kate B also suggested James Potter from the Harry Potter books, which to begin with seemed like a silly suggestion to me; certainly not worthy of the Pongo/ Mr. Brown company in which it stood – James isn’t even alive in the books! – but it is, of course, actually an excellent choice. James dies protecting his family from Voldemort – a powerful symbol of fatherly love, and he’s there in Harry’s mind throughout the books.

James Potter segues seamlessly into our next category…

There are quite a lot of these in children’s books, ranging from dads who’ve abandoned their children to dads who are absent through no fault of their own.

The father in The Railway Children. I can’t remember his name, but it doesn’t matter – he’ll always be “Daddy, my daddy!” to me, in the manner of Dead Poets Society and “Captain, my captain”.

The fathers in Jacqueline Wilson’s The Illustrated Mum and Louisa May Alcott’s Little Women were both examples of Kate’s category of “Absent Dads who are the Deus Ex Machina, resolving things at the end or making the ending happy”, as is the dad in The Tiger Who Came To Tea by Judith Kerr.

Interestingly, a lot of bad fathers are defined in terms of their absence (in another blog post I’m sure there’d be a lot to say about that…) Some literary dads, however, would leave their offspring a lot better off if they did disappear.

Surely the absolute worst dad ever is Huck Finn’s; the violent town drunk who locks his son in a cabin and leaves him to starve. If we can have To Kill A Mockingbird then we can probably sneak in Huck Finn.

Kate B points out that many fairy tale dads, such as the fathers in Hansel and Gretel, Snow White and Cinderella, behave shockingly badly towards their offsping, though they’re often under the influence of wicked stepmothers.

This is a more heartwarming category and it seems to be an popular archetype in children’s books:

The father in our very own Olivia’s First Term, by Lyn Gardner is viewed by some of us as a bit of a bad dad, but others of us felt this was harsh, and that he really was doing his best in difficult circumstances.

Other complicated and difficult dads who are more or less redeemed at the end of the book or books include Lord Asriel, from the trilogy His Dark Materials by Philip Pullman; Mortmain, from I Capture the Castle by Dodie Smith; Mr. Darling from Peter Pan; and Colin’s dad in Frances Hodgson Burnett’s Secret Garden

The magnificent Akela from Rudyard Kipling’s The Jungle Book.

Finally (!), here are a few that didn’t quite fit anywhere:

Kirsty called the dad in Angus, Thongs, and Full-Frontal Snogging “the best comedy dad”, and nominated the dads in Big Red Bath and Peepo“ for the title of “Best at giving baths dad”. And Charlie and the Chocolate Factory demonstrates the “Dad upstaged by grandfather” genre rather well…

As you can see, once you’ve started, it is hard to stop.

Is there a place on UK publishers’ lists for new British illustration talent?