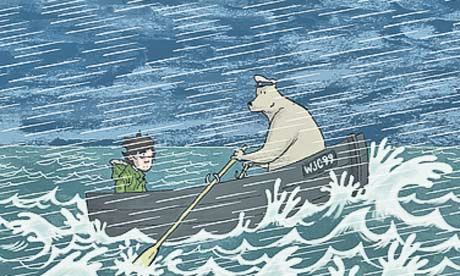 A guest post by Elli Woollard, who came to our book group event for A Boy and a Bear in a Boat earlier this month, on sharing the book with her children.

‘Hello’, said the boy, as he climbed into the bed.
‘Where to?’ said the bear.
The boy jumped to nearer the pillows.
‘Just a few chapters, please. Just as long as I get to stay up LATE’.

It wasn’t meant to happen. I’d enjoyed A Boy and a Bear in a Boat when I’d read it for the Nosy Crow book group, despite reservations about the pacing. I’d smiled at its dry, gentle humour. I’d even thought that it might possibly appeal to a certain very bookish type of child totally unused to the fast pace and action of TV and computer games. But wasn’t it really an adult’s book? I’d as soon as plonk my children in front of a script of Waiting for Godot as expect them to enjoy a book in which nothing much happened for 160 pages. It was not a book for them.

Fortunately, my children have a knack of proving me wrong. I’d already given it to my 11 year-old daughter as a bit of light relief after A Monster Calls. ‘Too young’, she’d declared after reading it, although she’d admitted it was funny in places. I’d asked her what it was about. ‘A boy and a bear in a boat, OF COURSE’, she’d said firmly. Grown-ups can be incredibly stupid sometimes.

What I knew I wouldn’t do was give it to my six year-old son. T doesn’t ‘do’ fiction. He’ll spend hours reading books about the periodic table of elements and absorb any number of scientific facts, but when it comes to fiction he switches off. Reading fiction to him is an exhausting process; he’s talker, not a listener, and his constant interjections mean that he tends to miss half the plot. He’d be perfectly capable of reading A Boy and a Bear in a Boat to himself, of course, but I couldn’t see that happening either. If there was anyone for whom A Boy and a Bear in a Boat was all wrong, T was that person.

Or so I thought. I started reading it to him just as a bit of an experiment, to see how long he would last. He sat up. He stopped fidgeting (just about). He listened, without being constantly asked. He knew pretty much exactly what ‘anomalies’ meant, without having to have the word explained. By the end of the first couple of chapters he was begging for more. ‘When’s the sea monster going to appear’, he kept asking (having been primed by his big sister). But it wasn’t a bored ‘are we nearly there yet?’ sort of question. Just curiosity. He was genuinely interested in the narrative.

Admittedly he rarely laughed, even at the bits I thought funny (although even my four year-old son thought the ‘I Spy’ game was hilarious). His reaction to the sea monster itself was fairly muted. But what I was amazed about was that the book, despite its slow pacing, drew his attention. My 11 year-old too, was enjoying the book for the second time, having it read to her rather than reading it herself. Even my four year-old son was listening, sort of (he came up with a theory that sea ghosts, whatever they are, are blue and have tentacles).

By the time we reached the faster-paced final third of the book, T was speculating about what was going to happen, and was quite excited when the boy and the bear found the Harriet again. I was a little worried about the ending though. T struggles with the unwritten rules of social interaction and empathy isn’t really his thing, but even so he seemed to have a certain amount of emotional investment in the boy and the bear. Would the ending upset him?

I needn’t have worried. ‘Maybe they only intended to stay far out at sea all along’, he said breezily. ‘And anyway, it’s only a story. They’re not real, you know’. I stifled laughter, as half our discussion in the book group was summarily dismissed. ‘But I know where they’re going’, said my four year-old, jumping excitedly up and down. ‘They’re going to Chesil Beach. That’s the other side of the sea! I know it is because I’ve seen it with my own eyes!’ Someone should perhaps tell Ian McEwan. It could make for interesting reading.

Even before we reached the end the children were begging me to read it all over again as soon as I’d finished. I doubt if I will, or not just yet. But that’s only because my husband wants to read it. ‘What is this book you’re all talking about?’ he’d asked one night. Well, I’d explained, it’s sort of a children’s book that’s not a children’s book (my husband isn’t interested in children’s books) and it’s a bit like Waiting for Godot. ‘Waiting for Godot?’ His eyes lit up. ‘Then I’m reading it too’.

Silly me, for thinking the book might not be popular.

(As a postscript it’s worth pointing out that my 14 year-old son won’t even deign to look at it. ‘I’m not reading some silly old book about a bear’, he said, rolling his eyes in long-practiced teenage fashion. ‘And exploding sea monsters? That sounds so childish’. I suppose you can’t please everyone.)

Elli blogs at www.wordstroll.wordpress.com and you can find her on Twitter here. Our next reading group event is now fully booked, but if you’d like to join in, you can do so online, on Twitter with #NCGKids and at The Guardian’s books website.

Our first two fairytale apps are on sale for one more week!