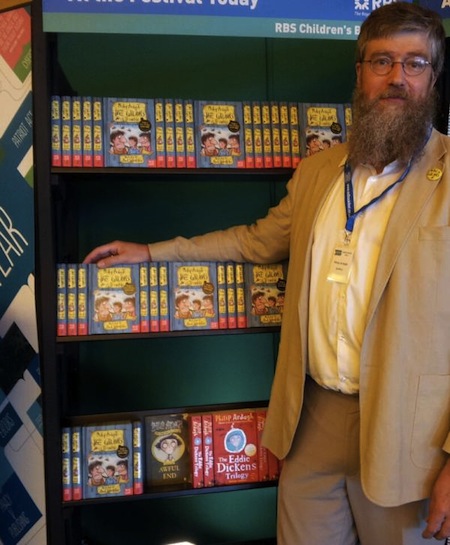 I feel I should explain myself before you start reading this blog. When enthused, I gush. And I’m enthusiastic about festivals – for a publicist they’re something between a long-awaited reunion and an assault course. LOTS of catching up, laughing, hugging and storytelling (both professional and not-so-professional…). Lots of great food and drink. And exhaustion. And elation. And regret.

And seeing as I missed Edinburgh last year – Kate and Tom went up – I was doubly ready to be enthusiastic. I didn’t just miss the Edinburgh Festival – I MISSED it.

So, the events. Without exception our brilliant authors excelled themselves. For some – Catherine Wilkins and Lyn Gardner – it was their first time at the festival. Catherine’s comedy masterclass event was HILARIOUS. For the 9+yrs age group, most comedy, it’s safe to say, is found in poo and pants. Well, for me too. I ROARED through the whole thing. And I think I can safely say we shall be seeing some of the masterclass’s attendees at the Edinburgh Comedy Festival in the future. My Best Friend and Other Enemies is off to a great start…

Lyn’s latest book – Olivia’s Enchanted Summer – is set at the festival, so as well as being a cracking read, it was contextually perfect. And Lyn knows her Edinburgh. She’s up every year for the whole shebang as the Guardian’s theatre critic – and she performed her event with all the elan, style and poise of one of her classically-trained stage school characters, taking us from the flying trapeze to the dizzying high-wire with her atmospheric readings. Encore!

Next up we had the World Premiere of The Grunts – drum-roll, please… Naturally, if you combine Philip Ardagh and Axel Scheffler – both Edinburgh Festival stalwarts – in any event you’re onto a winner. And we were. The audience loved it and even though it was a first for both Axel and Philip, event-wise, it went swimmingly and the newness of the material and format gave the event a very special feel. It felt a bit of a privilege to be the very first of what is sure to be a brilliant series of events this Autumn.

But that wasn’t all, Grunt-wise. That very evening we launched The Grunts at The Honours – Martin Wishart’s celebrated new restaurant… and I can only apologise to the other diners. The laughter coming from our two tables was TERRIFIC. If I hadn’t been sat at our table, I would’ve WANTED to be sat at our table. Such a good time was clearly – and audibly – being had by all. But we can’t have been too badly behaved as I had a very sweet e-mail from The Honours saying what a pleasure it was to have us and what a thrill it was to have hosted such a creative bunch of diners!

Then Axel and Kate took to the stage for a Pip and Posy event – Kate doing a brilliant job as storyteller and Axel’s live-drawing, as always, entrancing the youngsters in the audience… and then the guests of honour, Pip & Posy THEMSELVES appeared as a finale. Cue LOTS of waving, stroking and round-eyed wonder from the toddlers in the audience as they filed past on their way to the signing tent. I noticed ‘high-fives’ were also big this year. They grow up so fast these days…

The grand finale was the Mega Mash-Up boys, Nikalas Catlow and Tim Wesson – again, experienced Edinburgh festival goers – and as always absolute crowd-pleasers. Robots, giant slugs, dinosaurs, aliens, secret agents, ancient Egyptians – talk about something for everyone. Our Scottish Bounce rep, Sarah, was especially looking forward to the Mega Mash Up event – her son is a BIG fan.

And so the sun set on another Edinburgh – and it’s always a curious feeling. Elation, certainly. But also regret that it’s over. The city has a unique atmosphere when the festival’s running – pretty much its entire population, however temporarily, is up for a good time. And you can feel it. Couple that with a Yurt-full of excited authors, charming, capable and welcoming organisers and event chairs who absolutely bubble with kindness, knowledge and enthusiasm and you have a festival that’s very easy to miss. So my advice to anyone is – DON’T miss it. Next year, go.

What book would you bequeath to your children?