The Farm Beneath the Water: Turning Life Into Fiction - Nosy Crow Skip to content 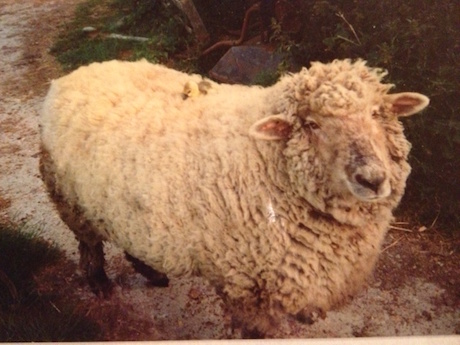 The Farm Beneath the Water: Turning Life Into Fiction

Jasper, with duckling friend Lucy on his back

Today’s blogpost is by Helen Peters, author of the Waterstones Children’s Book Prize-shortlisted The Secret Hen House Theatre and the newly published follow-up, The Farm Beneath the Water.

The Farm Beneath the Water and my previous novel, The Secret Hen House Theatre, are both set on the farm where I grew up, and both are inspired to some extent by real people and events. My friends and I really did have a theatre in a shed, and my sister really did have a Bean Club and a pet lamb called Jasper. And when Jasper grew up, he really did have a duckling friend who rode around the farmyard on his back.

The Lucky Horseshoe Theatre’s production of Murder at the Manor

However, when I decided to write a children’s book set on the farm, I knew it couldn’t just be a random collection of memories. In real life, for example, we put on plays purely for our own amusement. But in a book, the play would have to be for a vital purpose. In The Farm Beneath the Water, the survival of the farm itself depends on the success of Hannah’s play.

Southdown sheep on the farm

The farm in winter

A friend who read my first version of The Secret Hen House Theatre advised me to make the setting a character in the book. The reader has to understand why Hannah loves her home so much, so the farm has to be a living, breathing entity – a character in the story. It should be so vital to the story that the story couldn’t take place anywhere else.

Some of my notebooks

Until I was given that advice, the farm setting had been vague and imprecise. When I began to redraft the book, I started to visit the farm with a notebook in my pocket. (I’m very lucky that my family still live and work there.) I spent as much time as I could just wandering round observing things: the colours of the lichen on the ancient clay roof tiles; the animal prints in the mud; the buds and blossom in the spring and the berries and changing leaves in autumn. I stood in the farmyard at different times of day, in different weathers and in different seasons, noting down all my impressions. In my notebooks, I try to describe the sensory detail of what I see, not attempting to be poetic, just trying to be as precise as possible about the colours, shapes, textures, sounds and smells.

Of course, the challenge then is to use these notes effectively in the story, so that the descriptions of the farm don’t come in great chunks that slow the story down, but are woven into the narrative. Both my books are told entirely from Hannah’s point of view, so we only see what Hannah sees. Having spent her whole life on the farm, Hannah takes much of her landscape for granted, just as I did, and she only really notices things when they change, with the weather or the seasons or the time of day, or when animals die or are sold or new ones are born or brought in, or of course when they escape, destroy things, and humiliate her by pushing her into puddles or urinating all over her audition costume. I am happy to say that I was never weed on by a piglet during an audition for a school play, but I could only too easily imagine it happening.

The four of us on the farm

The characters of Hannah and her siblings in my books are inspired by my childhood with three younger siblings. But I found this quite inhibiting at first. How could I presume to know what my sisters and brother had been thinking and feeling? How could I know what really motivated them, what their deepest hopes and fears were?

For some reason, my breakthrough moment came when I started to think about each child’s relationship with the farm. Hannah loves the landscape. Jo loves the animals. Sam loves the whole business of farming: planning which crops to plant, which machinery to buy and which animals to rear. And Martha loathes EVERYTHING about it: the mud on her shoes; the animal hair that sticks to her clothes; the constant background noise of mooing, grunting, bleating and barking; the lack of decent plumbing, heating and carpets and, most of all, the fact that she lives at the end of a mucky pot-holed track miles away from all her friends.

Once I realised what their attitudes were to the farm, I stopped worrying about having to base the children exactly on my siblings, because suddenly these characters started to come alive for me. I found it much easier to write their actions and dialogue, because now I knew how they would act and react.

My father with a goat

The character of the children’s father was inspired by my father, who has lived and worked on the farm for over eighty years. My dad is so focused on the farm and so completely uninterested in domesticity that he has never made a cup of tea, let alone a meal, in his entire life. He has always had a mother or a wife to look after him. The family in my books really started to come alive for me when I thought: what if Hannah’s father were widowed? What if these children had no mother, and a father who had no knowledge of or interest in the domestic details of life? What would their lives be like then? And how would Hannah, as the eldest child, balance the chores she has to take on with her passion for theatre?

A pond on the farm

The story of The Farm Beneath the Water was inspired by the five-year fight my family and many other members of the local community undertook to stop the farm being flooded and turned into a reservoir. My biggest challenge in writing The Farm Beneath the Water was to convey all the arguments and evidence against the reservoir in a dramatic way. How could I turn the files full of jargon-ridden documents into a story that would keep a ten-year-old child turning the pages?

The answer I came up with was, as is always necessary in a children’s book, to put the children at the centre of the action. In the story, it had to be the children who initiated the campaign to save the farm and who came up with an audacious plan to make the whole village sit up and take notice.

My father and me with the book on his 90th birthday

I received my very first copies of The Farm Beneath the Water just before my father’s ninetieth birthday party (a day he started as he starts every other day, by feeding his pigs). It felt particularly appropriate to be able to give my father the very first signed copy of the book, as without his unwavering commitment to a sustainable way of farming that respects nature and preserves the ancient and beautiful landscape, the story might have had a very different outcome.

Thank you, Helen! The Farm Beneath the Water is out now – you can read the opening chapters of the book below, and order it online here.