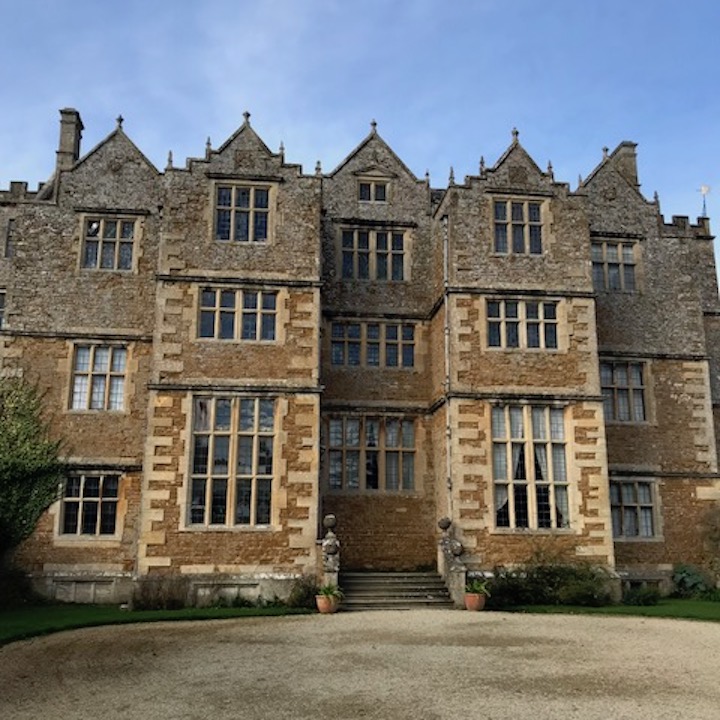 The House that Inspired Evie’s Ghost

Today’s blog post is by author Helen Peters, on the house that inspired the setting for Evie’s Ghost, her latest novel for 9-12 year olds.

Last week, thirteen years after my first visit, I went to Chastleton House, a Jacobean mansion in Oxfordshire. I have a particular affection for this house, as my novel Evie’s Ghost is set in a fictionalised version of Chastleton. The house in Evie’s Ghost is called Charlbury, a name with suitably ghostly word associations. When I revisited the area last week, I was surprised to see a real village near Chastleton called Charlbury. Perhaps this was coincidence, or maybe I had seen it before and it was lodged somewhere in my subconscious mind.

The first few drafts of Evie’s Ghost were not actually set in Chastleton House at all, but in a fictionalised version of Osterley Park, a palatial eighteenth century  mansion now also owned by the National Trust. It was a visit to Osterley Park that gave me the idea for the story, when I discovered that the only daughter of the family had eloped, aged seventeen, with a man of whom her parents violently disapproved. So when I started to wonder what would happen if a modern girl travelled back in time and became embroiled in those elopement plans, I envisaged the story happening at Osterley Park.

However, the book went through several major rewrites. At some point in the process, I decided that the house needed to be older, spookier and more forbidding than the gilded palace that is Osterley Park. It was then that I remembered Chastleton.

Thirteen years ago, I spent October half term in a National Trust holiday apartment above the stable yard at Chastleton House. The house is approached through wrought iron gates off a single-track lane. There are no other houses in sight: nothing but fields and farmland on all sides. This was ideal for the new version of Evie’s Ghost. Evie’s journey to the house is a gradual stripping-away of everything that’s comfortable and familiar to her. She’s a London girl, used to constant traffic noise, local shops, street lights and twenty-four hour public transport. So when she has to get a taxi from a deserted railway station to her godmother’s house, the journey along unlit roads with no sign of human habitation completely freaks her out. And when she finally arrives at her destination, her relief at not being murdered by the silent cab driver soon changes to further disorientation when she sees the huge stone mansion that seems to rise straight out of the lawns that surround it, its leaded windows glittering darkly in the rain. When she then drops her phone in a puddle, her severance from everything she has ever known is complete.

It’s no accident, of course, that Evie arrives at the house on a windy, rainy night. I stayed in the stable-block apartment in misty wet weather, when the low grey skies made it feel like permanent dusk, and I have vivid memories of rain-soaked grass, huge holly hedges, water dripping from tall trees, and misshapen topiary like collapsing blancmanges encircled by an ancient yew hedge. It felt like the ideal setting for a ghost story.

The inside of Chastleton House is also incredibly atmospheric, partly due to the fact that the family who lived there for some four hundred years had very little spare cash, so it was never modernised. It was easy to imagine that a nineteenth-century head of the family, strapped for cash with a crumbling mansion to maintain, might be tempted to force his only daughter to marry his wealthy friend, however unsuitable the match might be.

When I dug out my National Trust guidebook to Chastleton, I was thrilled to discover that it included detailed floor plans of the entire house. These were incredibly useful in visualising the characters’ movements, particularly as Evie has to work as a housemaid, which meant I needed to know her work routine and where she was most likely to come into contact with members of the family. I could also sketch out my ideas for how the house would have been converted into flats on top of these floorplans. If I hadn’t had them, I would have had to make up my own, so I am very grateful to the National Trust for doing that job for me! 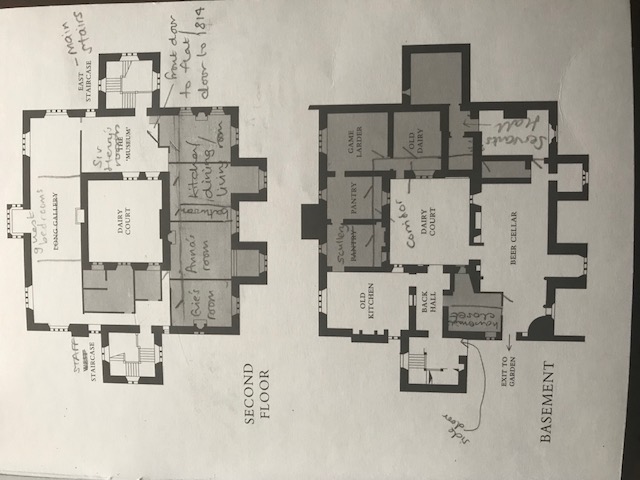 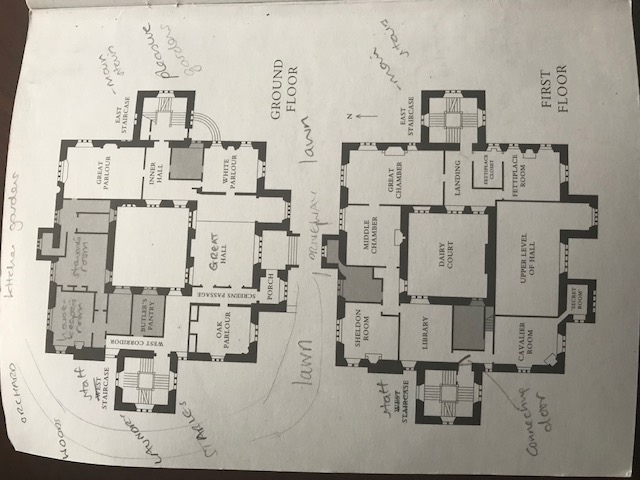 Of course, there were elements of Chastleton that I changed to suit the purposes of the story. With the gardens and grounds of Charlbury, I gave free rein to my English country garden fantasies. The gardens of Chastleton, which were much neglected before the National Trust took it on, are far less ornate now than they would have been. But when Evie goes back in time to 1814 Charlbury, she finds an orchard in bloom, a walled kitchen garden, beautiful lawns, perfectly trimmed hedges, herb borders, flower beds, a bluebell wood and a farmyard. The gardens provide some respite to Evie in the short breaks between her otherwise relentless duties, and also allow her to pass messages to the gardener’s boy with whom the daughter of the house is planning to elope.

The most distinctive feature of the fictional Charlbury was inspired by the history of another ancient house, Hellens Manor in Herefordshire. On her first night at Charlbury, Evie sees writing scratched on the glass of her bedroom window. The message reads:

This message is the catalyst that takes Evie into the past to try to help Sophia escape her terrible fate. Although the idea of a message scratched into a window pane by a desperate imprisoned woman was taken from a different house, it seemed perfectly feasible, given its long and dramatic history, that such a thing could have taken place at Chastleton. And one of the joys of historical fiction is, of course, being able to take inspiration from many different sources.

I was absolutely thrilled when Nosy Crow asked Daniela Terrazzini to illustrate the cover of Evie’s Ghost, having loved her work on other covers, particularly L.M. Montgomery’s Emily trilogy. My editor asked me to send through some ideas for how the house should look. Daniela used these photographs of Chastleton to create a truly beautiful cover.

Thank you, Helen! If you’ve not yet discovered Evie’s Ghost, you can read the book’s opening chapters below:

And here’s Helen reading from the book: