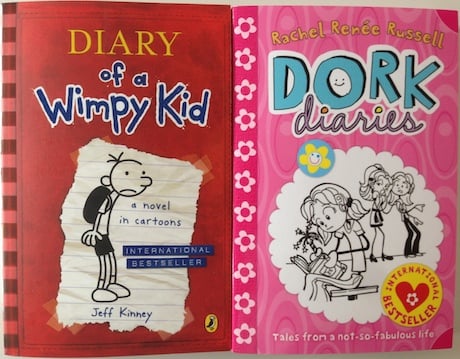 The Nosy Crow reading group book met last week to discuss Diary of a Wimpy Kid by Jeff Kinney and Dork Diaries by Rachel Renée Russell – two phenomenally successfully series for 7+ readers, both written in the form of diaries, with comic illustrations. We thought it’d be interesting to discuss these books not only because of their incredible successes, but also because they felt very relevant to the recent debate around gendered marketing (and content) in children’s books: both of these titles have very clear target audiences. And, of course, as well as asking questions about what they represented in the culture, we also wanted to talk about whether they have merit on their own terms.

I think it’s fair to say that these were not the most popular books that we’ve discussed at the reading group so far, although there was far from unanimous consent, and still a lot of passionate debate. Of the two books, Wimpy Kid was probably the more popular one, but again, this was not unanimous, and also largely dependent on the criteria by which we judged the two books.

Most of us found Wimpy Kid funny at least at some point (and one or two of us found it consistently funny), and several people enjoyed the “charming and endearing” illustrations. A lot of the group also felt that Wimpy Kid would “last” longer than Dork Diaries, that it more successfully crossed the gender barrier, and that it had broader appeal – a consequence, some people argued, of it being the Original Article: the book that began the trend for comic diary novels with geeky protagonists for this age group.

And yet, with all that being said, the main reason many of us found to approve of Wimpy Kid was for its ability to get young children (and especially boys) reading – in the words of one person, it “plugs a literacy gap”. Several members of our group cited experience with boys who had been re-engaged with reading by the series, and in at least once case, Wimpy Kid was ALL one young child would read. This idea – that Wimpy Kid is a good or worthwhile book by virtue of getting boys to read stuff OTHER than Wimpy Kid – provoked an interesting sort of debate: is this book only a means to an end – just a books that’s good at getting children to read other books? Or is it a book that is good in and of itself?

And while we didn’t, in the end, discuss gender in very great detail throughout the course of the evening, we did talk about whether we felt we were more “forgiving” to Wimpy Kid than to Dork Diaries, on the basis that encouraging girls to read seemed like less of a challenge, and so therefore we were less “lenient” with books that seemed clearly marketed towards girls, as we could expect a higher standard and make fewer compromises.

Actually I was struck, reading these books for the first time, how superficially the gender distinction was enacted by Kinney and Russell. The books seemed to be almost identical at moments – they approached exactly the same subjects (school, family, friends, the first inklings of interest in the opposite sex) and often in remarkably similar ways: sometimes, it felt that the only difference was the typeface. There are, certainly, different idioms in the two books, and issues are explored in different ways, stylistically, but the gulf was not as wide as I had expected, and I am almost tempted to say that with a few reversed gender pronouns it would be impossible to tell the difference. In the end, I think we felt that Dork Diaries pinned its “gender” colours to the mast in rather more pronounced a fashion than Wimpy Kid – one of us described the books not as being “for boys” and “for girls” but as being a “girl” book in the case of Dork Diaries and a “unisex” book in the case of Wimpy Kid.

Dork Diaries did, though, provoke a stronger reaction from most of our group: whilst it seems that it is possible to feel only indifference towards Wimpy Kid, Dork Diaries was met with more visceral, love-it or hate-it attitudes (with most, it must be said, erring towards hate). One of our members confessed to being “exhausted by the endless capitalisation and Oh-my-Gods” and conceded that “possibly after 60 one loses one’s juvenile sense of humour” (although the same person conceded that the minutiae of adolescent life was cleverly handled). A few of us felt that Russell was unnaturally ventriloquizing a young voice, and that her attempts to connect with her audience by cramming in references to iPhones and Tyra Banks was forced and misguided.

And this lead to another interesting and broader discussion – how well will these two books age? Of the two, a majority believed that Wimpy Kid would last longer, but whether it would find its place as the next Adrian Mole or the next Babysitter’s Club was rather more open to debate. A number of us (again citing Adrian Mole) didn’t feel that the specific zeitgeist-y references would necessarily hinder enjoyment for future readers, but rather turn the books into useful cultural artefacts.

And in spite of these objections, we still found good things to say about Dork Diaries: everyone, I think, agreed that it had more of a plot than Wimpy Kid (one person said that they were about to give up entirely, until the scene with the party invitation, at which point they decided to stick with it), and one particularly ardent fan also argued that the book possessed all sorts of subtle shadings in its characterisation (others felt simply that the characters were one-dimensional and unlikeable).

At times I felt that things that I didn’t particularly like about Dork Diaries myself might really have been strengths: I felt alienated and unable to “connect” to it, and perhaps that is exactly how adults should feel towards books for this audience: a book which convincingly recreates the world of teenage girls should, I think, seem foreign to grown-ups (in much the same way, I firmly believe that the sign of a good teen movie is that it confuses or offends the adult population).

Even though Dork Diaries does, we all agreed, have better pacing than Wimpy Kid, it’s also true that nothing much happens in either book, and again, there was some opinion that perhaps this was not entirely a bad thing: are the books willing to sacrifice a plot in order to convincingly adhere to the conventions of a diary? There was some disagreement amongst those of the group willing to admit to having kept diaries as children (or – shock horror – reading those of their children now) about whether these felt like realistic representations of the form. I was struck by the fact that both books begin with assertions by their narrators that the diary was stupid (and foisted upon them by parents) and that they wouldn’t be keeping it up. How true to life is this idea, I wonder?

Some people confessed that they read the two books waiting for the – rather unlikeable – characters to grow and change by the end, or to learn their lesson, and really this doesn’t happen at all in either case: there is no change and no moral message. I found this rather refreshing, actually – a sort of early introduction to the famous guiding vision behind Seinfeld, “no hugging, no learning”.

So while I can’t say that these were the most popular books we’ve read there was certainly plenty to talk about.

The date and books for the next Reading Group have yet to be decided, but if you’d like to take part and you’re not already on our mailing list, email tom at nosy crow dot com, and we’ll keep you notified.