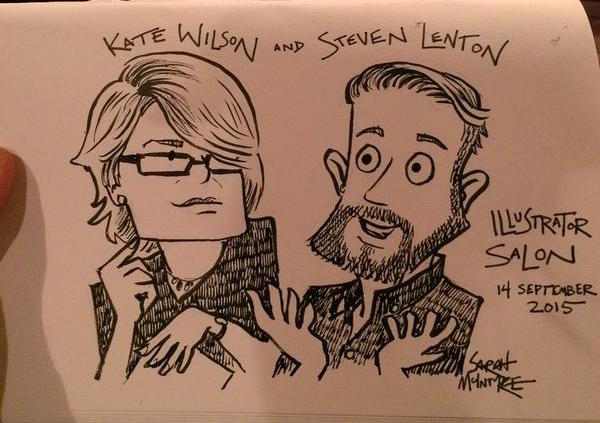 The verdict on the first Nosy Crow Illustrator Salon

Last night Kate and I made our way to The Book Club in Shoreditch for our first Illustrator Salon. Steven Lenton, illustrator of the Shifty McGifty and Slippery Sam picture books and author-illustrator of Princess Daisy and the Dragon (and the Nincompoop Knights), had bravely agreed to be our guinea pig for the evening as our first featured illustrator, and so after a fortifying glass of wine and a quick debate between Kate and Steven about exactly WHAT Rob had done in The Archers,  we began the evening.

Steven proved to be a FANTASTIC illustrator for our sell-out crowd of fellow illustrators, students, publishers and picture book enthusiasts, talking about his early inspirations (particularly Mary Blair), his career to date, his creative process, the challenges of working in digital and on paper, the process of creating a picture book from start to finish (with all the highs and lows along the way…), the relationships he has with his editors, designers, and authors, the differences he’s found in working with a number of publishers, and his advice for illustrators looking to advance their career (go to bookshops and see what’s selling, try life drawing, draw every day, develop a style, and more).

The length of signing queue alone seemed to be a testament to what a success Steven had been – and here’s what some of those who’d been there had to say on Twitter:

Great evening at @NosyCrow Illustrator Salon with @2dscrumptious. Will never tire of hearing illustrators talk about their work and process.

Good night all. Really enjoyed the first @NosyCrowBooks illustrator salon, which I went to after meeting sister in law and niece in London. — Anne Booth (@Bridgeanne) September 14, 2015

And, very appropriately, illustrator extraordinaire Sarah McIntyre even drew Steven and Kate together:

We haven’t yet announced details of our next Salon event, but if you’re interested in attending, sign up to our mailing list and you’ll be the first to find out when a new date is confirmed:

Thank you very much to everyone who came along for making the night such a success!