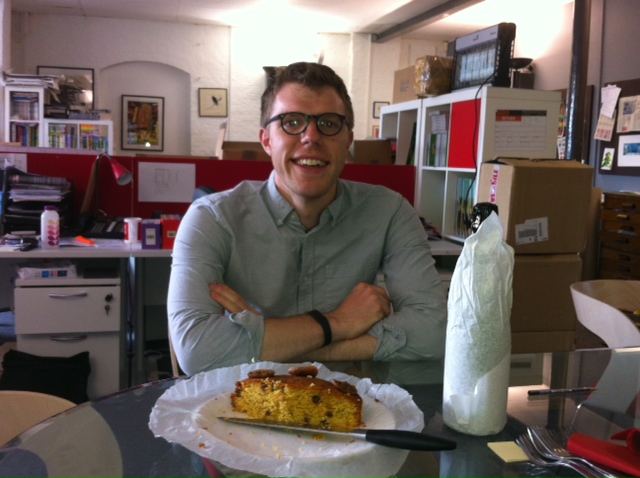 Tom Bonnick is a Rising Star

Tom, with celebratory champagne, and, of course, cake

Today, The Bookseller published its annual list of thirty-nine Rising Stars – “the publishing industry’s movers and shakers, have caught the eye by going above and beyond the call of duty.”

Tom first contacted Nosy Crow in November 2010, before we’d published anything at all. He started on 5 April 2011 as an intern. Adrian chose him, and I was in Australia visiting our friends and distributors, Allen and Unwin, when he started. By the time I came back, Tom had somehow made himself invaluable, already demonstrating the initiative, goodwill, intelligence, learning speed and baking skills that we have the privilege of drawing on today.

After a few weeks, he told me that he wouldn’t be coming in the next day or for the next week or so. I was a bit annoyed, frankly, because we’d got used to having him around. When I asked why, he disclosed that he had to sit his final exams at Glasgow University. I was horrified: I had assumed he’d graduated the previous year, and was really anxious that we’d eaten into his revision time. He, by contrast, was entirely calm… and returned within a fortnight with a first class honours degree in English Literature.

As soon as he came back, we offered him a job, and he accepted. But, honestly, I was a bit iffy about appointing him, not because I didn’t think he was very good, but because I wasn’t, at that point, convinced that he wouldn’t suit an adult literary imprint better (he’s quite, you know, intellectual, is Tom). He persuaded me out of this view over slightly margarine-y coffee and walnut cake in a church cafe round the corner from the Imperial War Museum. I am glad he did.

He started working for us on 8 June 2011 (we think: it was all very fluid). When I get off my bike and stamp upstairs to the Crow’s Nest with a new idea, he’s usually the first person I talk to about it, and he’s taken on every new project that we’ve thrown at him with admirable sang-froid and diligence, independently working out how to do things that, often, none of us knows how to help him with. That’s not to say he’s uncritical: he speaks his mind, and we don’t always agree on what Nosy Crow should do. He is, I think, a sceptical (he says he’s named after Thomas the Apostle – “Doubting Thomas”) optimist, which makes him a useful counterbalance to some of our wilder aspirations and my more bonkers ideas, but he’s not a nay-sayer. We know we are lucky to have him every day.

I am proud of Nosy Crow as a business in an abstract way. I am hugely proud of the books and apps we publish. But I also take enormous pride and pleasure in seeing all (and I mean all) the people we have been able to attract to the company develop their careers and skills: I think it’s true to say that there isn’t anyone who has joined Nosy Crow who’s not changed and learned a lot while they’ve been here. We think they’re all pretty starry, but it’s great to see individuals’ starriness acknowledged by people outside the company. Last year, Ola Gotkowska, our excellent rights manager, was named as a Rising Star. Tom, before this most recent accolade, won the Independent Publishers Guild’s Young Independent Publisher of the Year Award a few months ago.

Congratulations, Tom, on being a Rising Star.